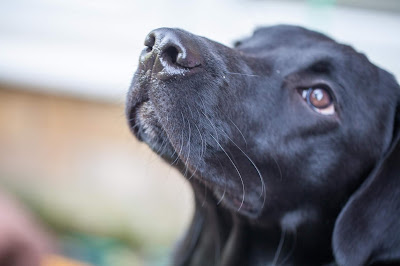 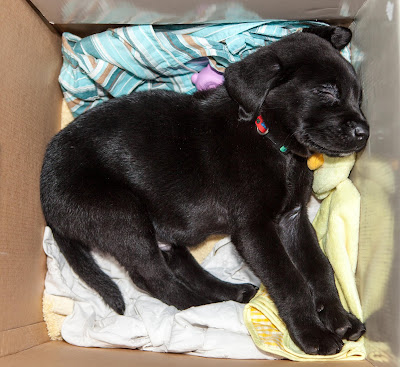 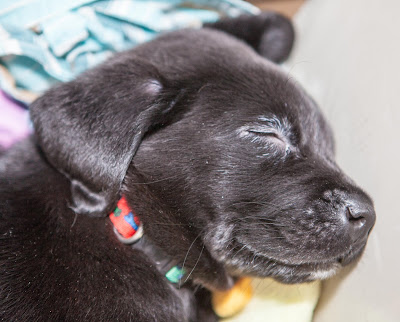 Puppies sleep soundly. Only when dogs become very old will they sleep again as deeply 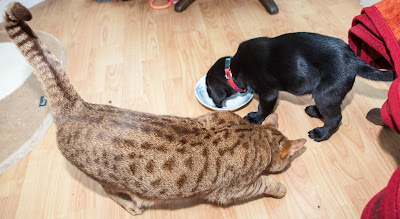 For a while Gus was smaller than the cats
Gus is a big black bear of a dog, very strong, very loyal. He will defend us to the death, mainly by deafening intruders with his bark, including the ones he sees on the television. He keeps the other dogs under control, apart from his half-sister, Jenna, to whom he shows the utmost respect. He is never unpleasant but they know not to overstep the mark.

Out walking in the woods, he greets other dogs kindly but is not really interested in playing with them, unless they are Dalmatians. He was brought up with the Spotted Ones and becomes excited when he sees one. 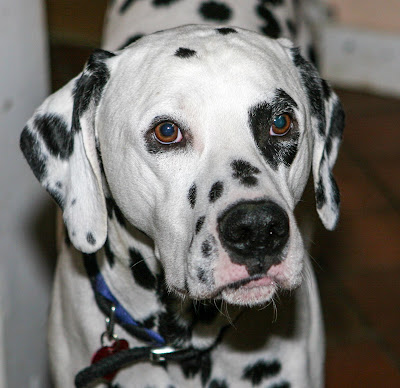 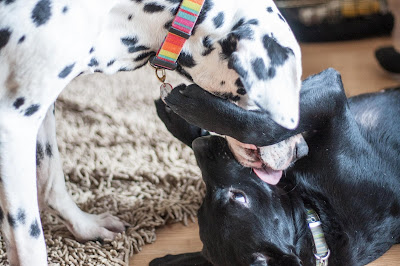 Gus was in awe of Frodo 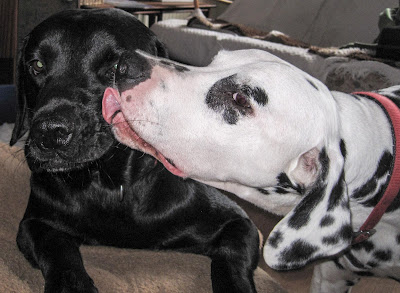 He plays with Bertie and Roxy, and he and Roxy are inveterate stick collectors.

He likes people but shows true affection only to his human family, particularly the ones with whom he lives. He is rarely to be found far from them. He is the dog most likely to be lying quietly next to one’s chair. He is nine years old now and seldom jumps onto our bed at night. It seems that dogs reach an age, around eight or nine, when their own baskets become just as attractive as their humans’ bed. 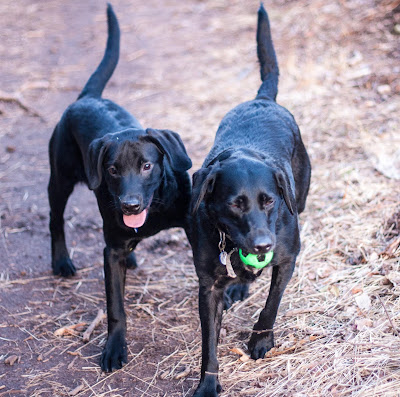 Gus was once smaller than his half-sister, Jenna 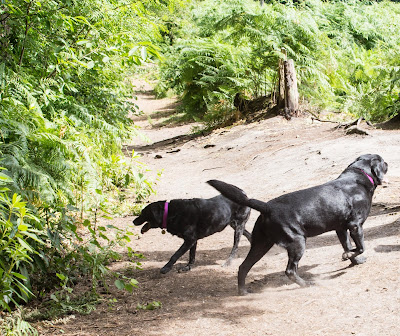 Now Jenna is smaller than Gus
He has the sweetest smile, a wrinkling of the upper lip and nose to show just the front teeth. 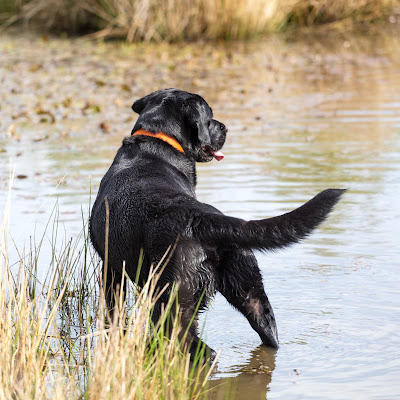 Like most gundogs, Gus loves water
His beauty lies not in elegance but in strength and he is often admired. He runs like a rocking horse, his gait not having changed much since puppyhood. 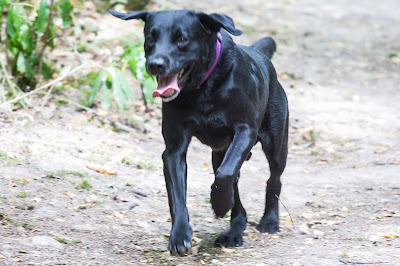 Aerodynamic Gus!
The retrieving instinct is powerful, though he is reluctant to relinquish his prize. 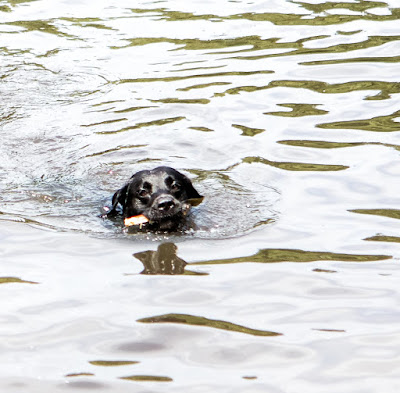 Retrieving in water
Balls stand no chance in his mighty jaws and the slobber he generates when mashing them is scattered across his back when he shakes his ‘prey’. 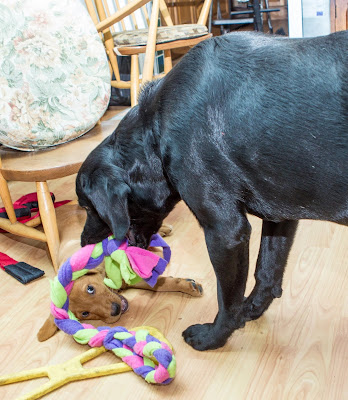 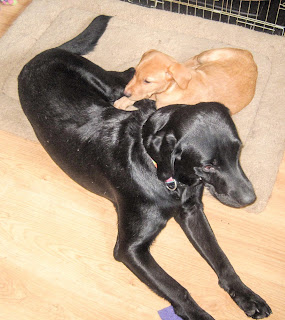 . . . and after play comes rest. Small puppies like to nestle next to big dogs
He and Bertie are great friends and both make a terrific din when the time comes to have collars put on, having first followed Barry upstairs to make sure he really is putting on the walking trousers. They both understand English so we have to spell the word ‘trousers’ or refer to them as ‘Ts’ or ‘pantalon’ or ‘lederhosen’, the latter a little confusing as Barry has never worn leather trousers, nor ever will!’

Gus has a few issues. 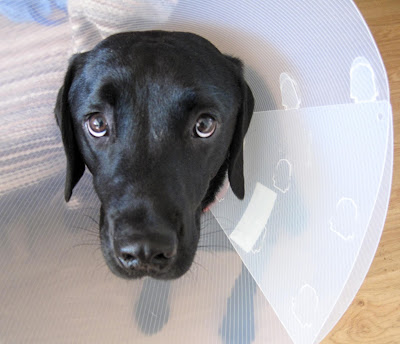 Gus and the Collar of Shame. He had to wear a collar after an operation but it made him so depressed we removed it
The vacuum cleaner used to make him shake and shudder though he has become less nervous of late. Familiarity breeds contempt or, at least, tolerance.

In common with many other animals, fireworks reduce him to a shivering, panting wreck and he does then clamber onto our bed until the frightful noise abates. Thunder has a similar though lesser impact, and yet gunfire, of which we hear a lot, being close to RMA (Royal Military Academy, Sandhurst) training grounds, has no effect on him. He is, after all, a gundog.

The thing that most disturbs him is strange or unfamiliar objects in his path, (not outdoors, they were always Cariadd’s and Dominie’s bêtes noires) but in the house. He is often to be heard tap dancing on the landing outside our bedroom, trying to pluck up courage to pass the chair or suitcase or laundry basket that impedes his progress.

‘Come on, Gus,’ we call cheerily and there’s a clatter of claws as he rushes in. Sometimes, though, he cannot face the perceived peril and then, cautiously, delicately, meticulously he edges into the room backwards. Once safely past the obstruction he dashes for his basket and settles immediately, soon to sleep. 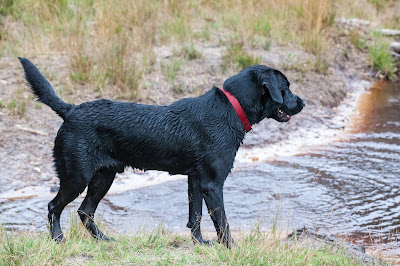 Never far from water, if he can help it. His coat sheds water very efficiently. 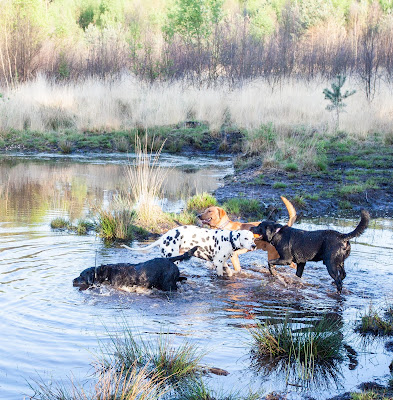 Water with friends is even better, here with Bertie, Jenna and the late, great Frodo 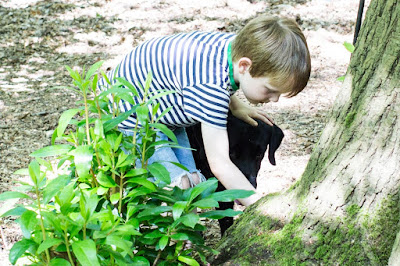 Providing a steadying head for Frankie 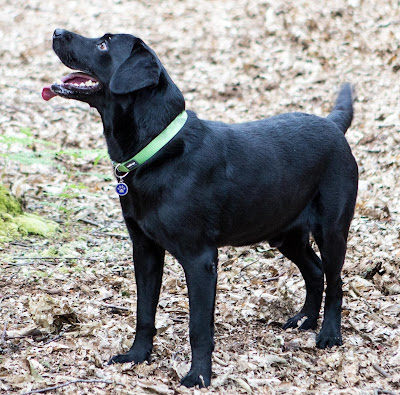 Looking and listening, ever ready to please 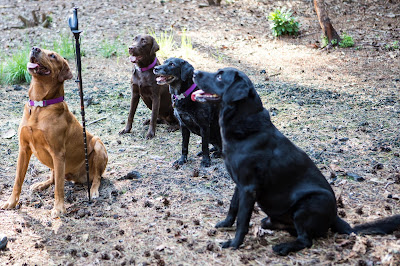 In the woods with the rest of his friends and relations
He is a wonderful dog, our Gus. We call him Augustus *Lazarus Cooke because he nearly didn’t survive his birth and came to and took a breath almost at the moment all hope had been abandoned.

*Lazarus was brought back to life by Jesus.