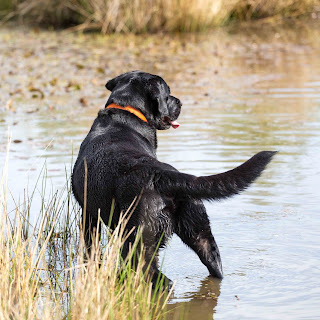 I see it has been more than a year since I last blogged and such a lot has happened in that time. Susannah and Frankie have settled in nicely and it’s good to have them here with us – more people to make a fuss of us J

The Humans tried to introduce Pats to the other cats but it didn’t work – Herschel and Isambard were fine but Jellicoe bullied her, the naughty boy. Us dogs like her well enough but I don’t think she’s all that keen on us – she likes a quiet life. Then Susannah brought in two Somali kittens and they really like the other cats and us. They’re brothers and they’re called Leonard and Solomon. (Editor’s note: Somalis are semi-long-haired Abyssinians. Leonard looks like a little lion and Solomon is like an Arctic fox) They spend a lot of time downstairs with everyone. 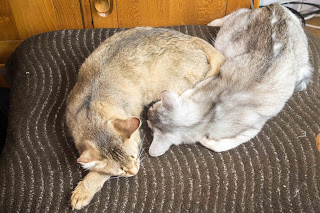 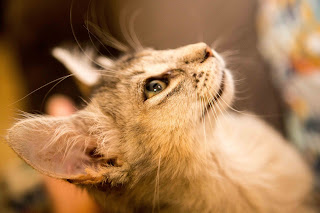 
Soon after that Frodo had to leave us and we were all really sad. It felt strange not to have him around and we all still miss him. He was my hero. 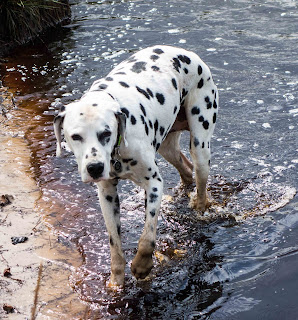 A little while later some people came to sort out the garden and make it safe for Frankie to play in. Now there’s a fence all round the pond so he can’t fall in it. 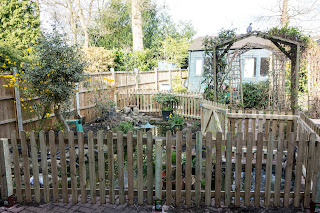 Lolly came to stay with us while Bethan and Robert went on holiday. It’s nice having her here to play with and she really likes going out for runs with us. She had been here a few days when something unexpected happened. On her birthday Susannah stayed at home with us while Mr and Mrs H went out all day. I was a bit unhappy ‘cos I don’t like them going out without me. I was really pleased when they came back – we all were – but we were surprised to see Mrs H carrying a little chocolate puppy. 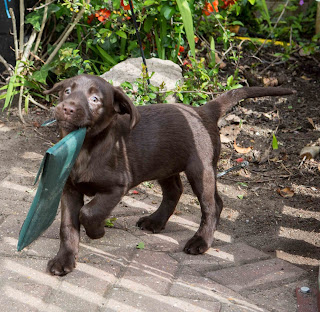 She’s called Roxy and Jenna and Bertie and I thought she was just going to stay with us for a little while like Lolly. 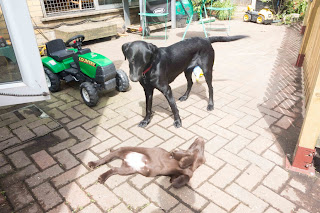 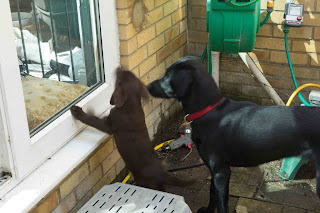 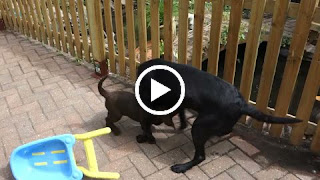 Lolly started playing with her but Roxy was a bit cheeky and Lolly had to tell her off. She screamed so loudly but there was nothing wrong with her. Then Bethan and Robert came back to collect Lolly. She was very happy to see them but we were sorry to see her go. 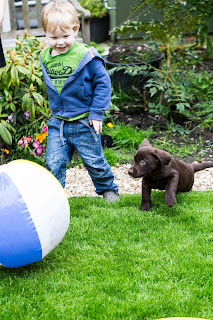 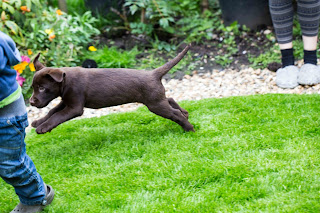 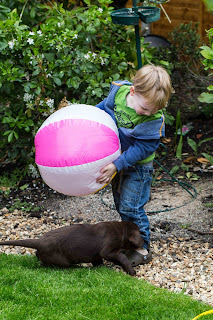 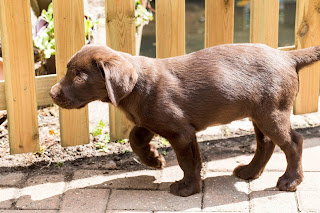 We expected that soon Roxy’s holiday would be over and she would be going home but she’s still here so I think she’s here for good. I had to reprimand her the other day ‘cos she got in my personal space. I wish the cats would tell her off ‘cos she chases them when she has the chance but they’ve never scratched or bitten anyone so I s’pose they never will. None of us have played with Roxy yet but we all like to sniff her when she’s asleep ‘cos really we’re very interested.

These days Mr H takes us out in the morning. He goes slowly on his bike and we run alongside. Mrs H walks us in the evening. We’re all pretty tired by the time we go to bed but it’s a good sort of tired.

I don’t think there’s anything else to report. Maybe things will be a little quieter round here for a while.