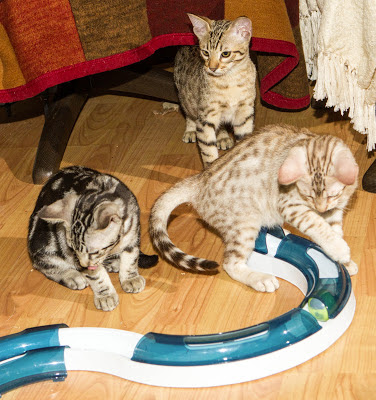 Our Servants have informed us that our arrival has been announced to the world. They suggested that we might care to tell the wider public a little about ourselves and we indicated that we would be happy so to do. They asked if we would like to have a blog of our own but we declined. We don’t feel we could commit to such an undertaking with our busy schedule. We believe it is understood that there are three of us. There were four in our litter but our other brother had already been chosen by different Servants – the last choice they will have before they learn who is Master. We shall take turns in composing this entry. Herschel will start. 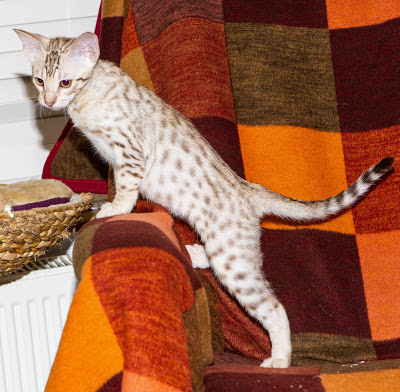 Like my brothers I am an Ocicat. I am a Cinnamon Silver and allegedly I am the most sensitive of the three of us.

You may be wondering about my name. Sir John Herschel, Ist Baronet, was ahead of his time and was named after me. He was an astronomer so it is natural that he was interested in Time Warps. Time Travel is nothing new!!

We were all rather alarmed when we were taken from the Servants who had served us all our lives. We travelled to our new Kingdom in a box that smelled of another Ocicat which was quite comforting. I believe his name was Winston but I do not know where he went. It was a long journey and we were tired when the Servants stopped the car and took us into our new Palace. It makes me quite faint to think about it so I am going to ask Isambard to take over. 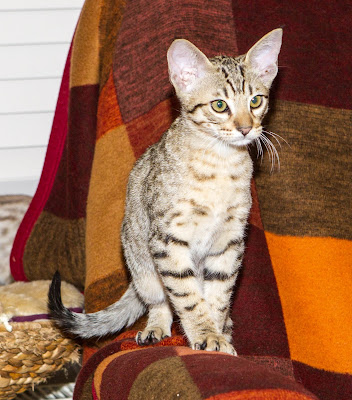 Thank you, Herschel. Before I continue the saga let me first explain that I am named after Isambard Kingdom Brunel, the great Victorian engineer. I am a Tawny Ocicat, quite an appropriate colour for an engineer.

Back to the blog. The first thing we noticed was that the floors were bare. Could our new Servants not afford carpets? As we were carried through to another room we were shocked to see four enormous beasts in the Palace grounds, staring through the glass and making extraordinary and very loud noises. The Servants placed us in what appeared to be a prison. What had we done to deserve such treatment? We were relieved to see a large litter tray in there and we leapt on top of it and huddled together for courage when the dreadful, slavering creatures burst into the room and came to sniff us.

We soon discovered that they were interested more in our food than in us but hissed and growled at them nonetheless. One of them had spots like Herschel and me but he was enormous. We learnt that these fearsome beings were DOGS and they appeared to be the Servants’ servants so of little account to us. We tolerate Servants but their minions are beneath contempt and we shall lose no opportunity to emphasise that when eventually we allow them to mix with us. I think Jellicoe should continue. 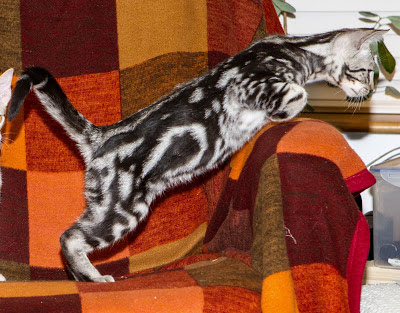 Only too pleased to oblige, Brother.

You may have noticed that Isambard said one of the DOGS had spots like him and Herschel. I have spots too, on my tummy, but I am a Black Silver Ocicat Classic – a superior type of tabby of impeccable breeding. In keeping with my very smart uniform and military bearing I am named after Admiral Jellicoe, 1st Earl Jellicoe. I have a loud voice, a necessary requirement for issuing orders to the other ranks on the poop deck, though in my case I have just my brothers to command. When the Servants are required to attend to us we all shout orders.

The time is fast approaching when we shall allow the DOGS to come into our domain – the Conservatory – and we shall venture into their quarters. Our Servants carry us into the Conservatory in the mornings and one of them sits with us to admire our agility and beauty and to play with us. Sometimes both of them come in and the DOGS stand at the glass door and stare at our food while the Servants talk to us and take photographs and moving images (video) of us. We may be able to include some video of us on one of our blog posts one day if the Servants can find time to upload it. We understand that we take up a lot of their time. They are simple souls and learn slowly what is required. 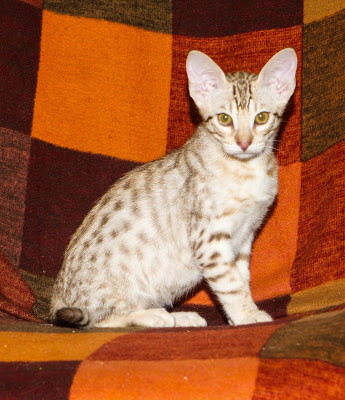 Thank you, my Brothers. I am recovered enough to resume. We had not been long in our new Palace before more Servants came to admire us. Bethan and Robert spent much time playing with us. Robert is a Cat Whisperer- at least that is what our Servants called him – and we were happy to permit him to pick us up. I was still quite skittish. 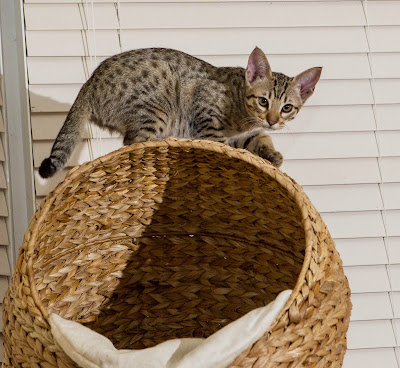 Then last weekend even more Servants came, including a very small Servant who had to be carried everywhere. Our Servants called them FAMILY. There were a number of younger Servants who spent a lot of time in our domain. We were tired at the end of the day but discovered that we were beginning to enjoy the Servants picking us up. 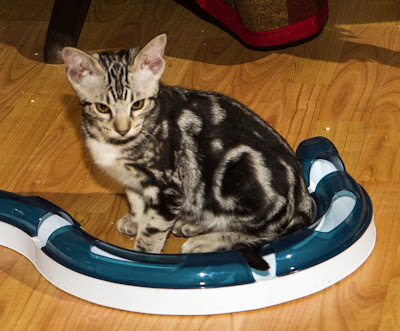 I am always the first to purr. Whenever a Servant speaks to me I purr – it’s only courteous – and of course I have a very loud purr. We were taken to the STAIRS the other day. We had never seen such things before but we are wonderful athletes and had no problem leaping up and down them. I feel there is much more to this Palace than we have yet seen. The prospect of exploring it appeals to me. 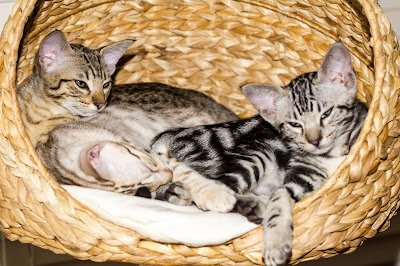 We enjoy the Conservatory as it is warm and full of things to climb on and race around and allows us to enjoy one of our favourite pastimes – ornithology. Now, as we are still quite young, we must stop writing and take a nap. We are sure there are exciting times ahead. 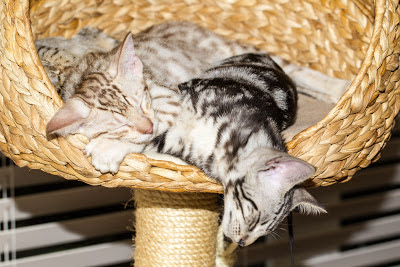 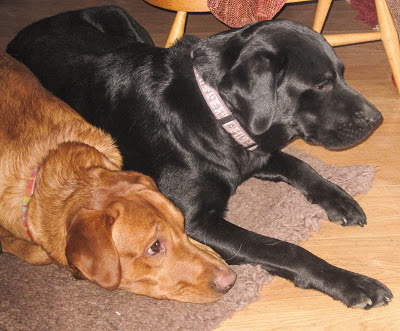 Here I am with Bertie - he's quite confused - doesn't know why he can't play with the kittens.
Hello everyone!

I know it’s only been a little while since I last blogged but I wanted to tell you how life has changed.

Do you remember me telling you that Mr H kept saying, ‘You don’t know what’s coming your way,’ and how Mrs H laughed and said, ‘They’ll be all right,’ and I thought it wouldn’t be anything nasty? Well, it isn’t anything nasty as far as us dogs can see but we’re not allowed to get close enough to really find out.

Just after the Boss’s birthday he and Mrs H rearranged the furniture in the sitting room and got the big puppy pen out of the garage and put it next to the patio doors. All us dogs thought there must be a puppy coming and we were thrilled. After that Mr and Mrs H took us for a walk and then they went out again on their own but this time they took Winston’s basket with them. Bertie got really excited and sniffed it all over and we all thought it was a big mistake about Winston dying and maybe he was coming home after all. It wasn’t and he didn’t but what they did bring home were three tiny cats – kittens they’re called - and they’re distant relations of Winston and Monty.

We wanted to make them welcome and play with them but we weren’t allowed and anyway they weren’t very friendly. They hissed at us and growled and we backed off. I think they were afraid, actually – we must look ever so big to them.

Mrs H took them into the conservatory and they rushed off and hid under the bureau and the low coffee table. They didn’t want to be stroked and they didn’t eat anything. Naturally, we were curious so we stood in the kitchen looking through the glass door and they ran as far away as they could.

Then Bethan and Robert came. Robert loves cats though they make him breathless and Mrs H calls him the Cat Whisperer ‘cos he picked them up and they didn’t struggle.

This weekend everyone else came so the kittens were played with all day and they were really tired. They’re not scared any more but we’re still not allowed to meet them nose to nose apart from when they’re in the puppy pen at night. I’m looking forward to the day we can all be together ‘cos I liked Monty and Winston and I miss them curling up with me.

I expect they’ll tell you about themselves but here are some photos of their first day with us. I don’t think their eyes could be any bigger! 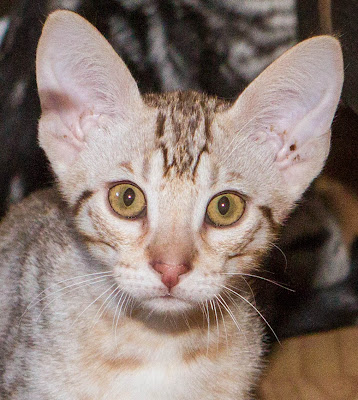 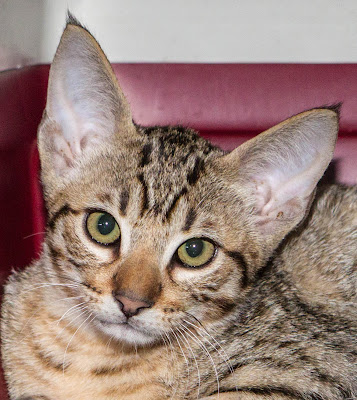 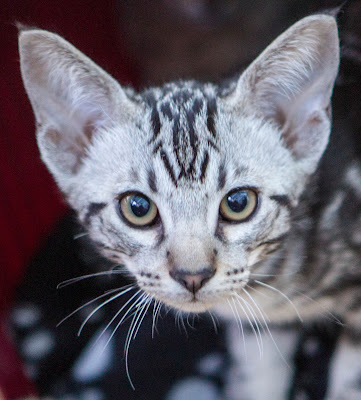 Jellicoe
Got to go – supper time. There’ll be more room in the kitchen now that Tia, Foxy and Buster have gone home. 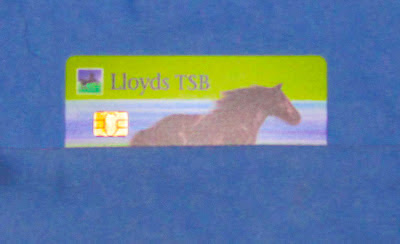 My new Cashpoint card arrived yesterday. The sticky strip across it pronounced, ‘You must start using this card immediately. Please destroy your old card securely.’

So, I had to stop what I was doing and rush out to the ATM to get some money, then I had to dress up in a bio-hazard suit to destroy the old card securely.

Honestly, your life’s not your own these days . . . 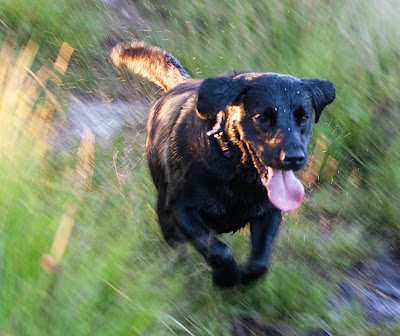 It’s windy and dull today but it isn’t raining. It’s a special day for Mr H ‘cos it’s his birthday so it doesn’t matter to him what the weather’s doing.  Yesterday he and the missus went out. They took us for a long walk first then off they went in the car. They left Jenna in their bedroom but they didn’t know that till they got home and couldn’t find her.

They went to see Gareth and Nina and Susannah and Nick and the children. I would have liked to go too, ‘cos I like children but I had to stay and look after the house. Us dogs still haven’t met the baby – he’ll be all grown up by the time we see him. I think he’s coming to our house in a little while.  Everyone keeps saying he’s a gorgeous, happy little boy - I hope he likes us.

Anyway, Mr and Mrs didn’t get home till ever so late but they left the lights on for us even though we don’t mind the dark. We hadn’t had our supper so that was the first thing that happened when the Humans walked in. Then the Humans had their supper.

Today we’re all tired. Us dogs get really worn out worrying about our Humans when they go out without us to protect them so we always spend the next day sleeping. I’m wondering what’s going to happen in a few days ‘cos Mr H keeps saying, ‘You don’t know what’s coming your way,’ then Mrs H laughs and says, ‘They’ll be all right,’ so I don’t think it will be anything nasty. I expect it will be something nice that we’ll really like – maybe a big juicy boneJ They’re going to take us for a good long walk so that means they’ll be going out without us again to collect whatever is coming. I expect dogs aren’t allowed in bone stores – too much excitement. 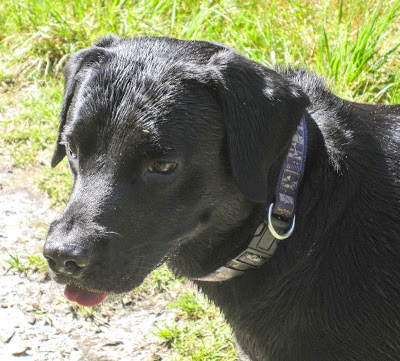 If you ever doubted the intelligence of pigs this clip should convince you . . .