May brings an explosion in the garden. Everything burgeons and each day offers fresh delights. The month becomes increasingly noisy as young birds demand that their parents feed them. The parents are on the go from just before break of day until the last vestiges of light have left the sky - they are being worn ragged by their demanding offspring. Feeding several bottomless pits is exhausting and some of the adults are beginning to look rather unkempt, their usually pin neat plumage dishevelled. There is little time to preen when there are so many mouths to feed. 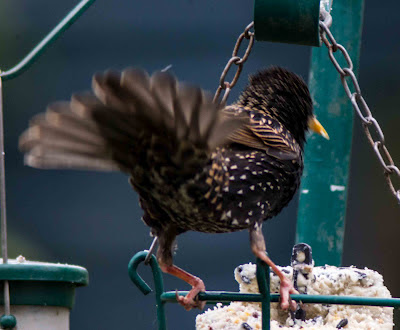 It was flirting my tail like this that got me into trouble in the first place. 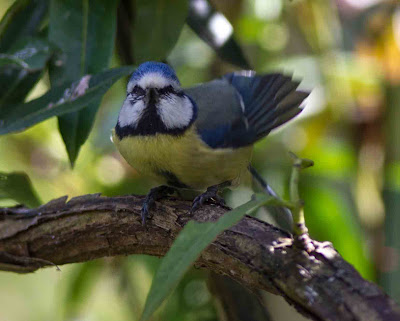 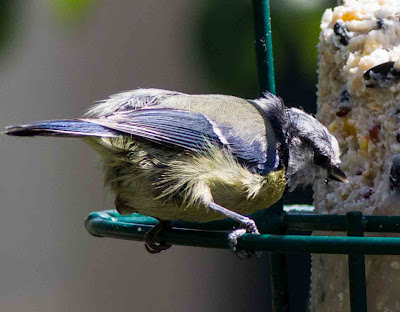 I'm exhausted - no time some days even to  run a comb through my feathers . . . 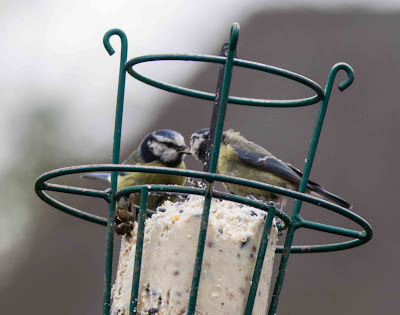 . . . but at least my babies say 'Please' and 'Thank you', unlike those rude starling youngsters. 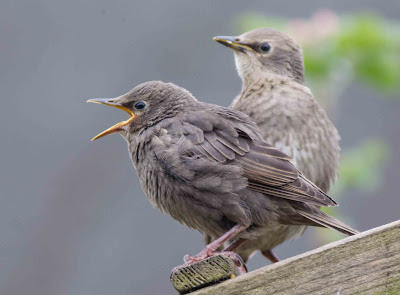 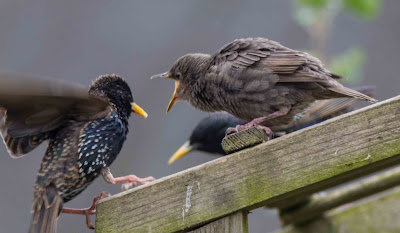 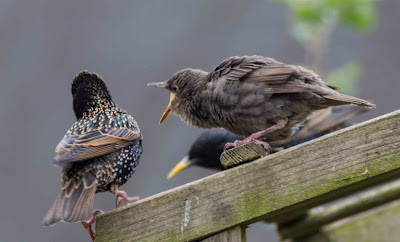 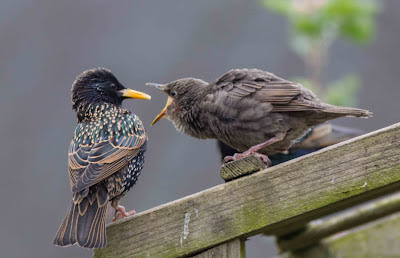 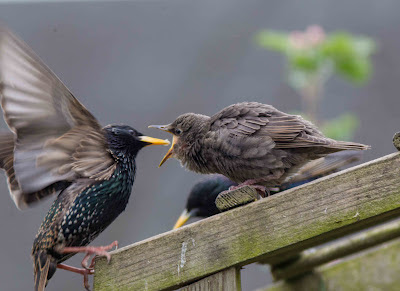 We have seen blackbirds, goldfinches, nuthatches, coal tits, magpies, blue tits, great tits, greater spotted woodpeckers, wood pigeons, robins and a chaffinch at the feeders.  It’s very unusual to see a chaffinch – they prefer to feed on the ground. The long-tailed tits are noticeable by their absence – no doubt they’ll be along later for they must have young too. The jackdaws have been back to take food from the bird table and the local crows are vigilant and noisy when a red kite soars above their nests, looking for an easy meal. 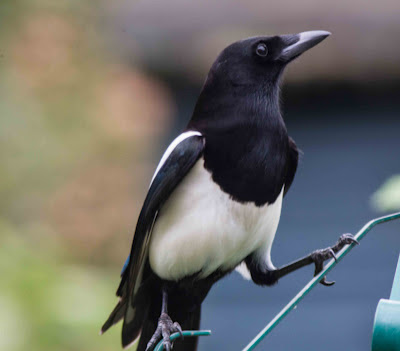 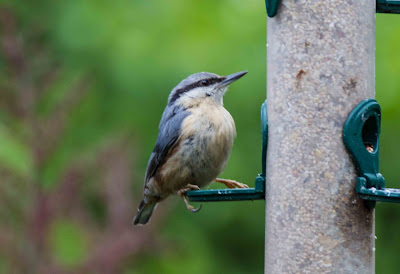 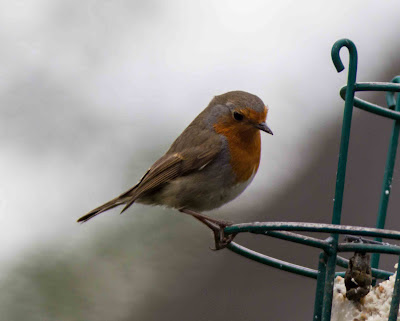 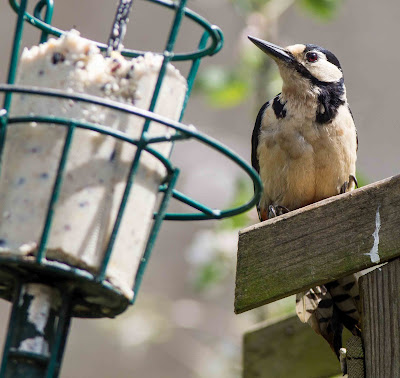 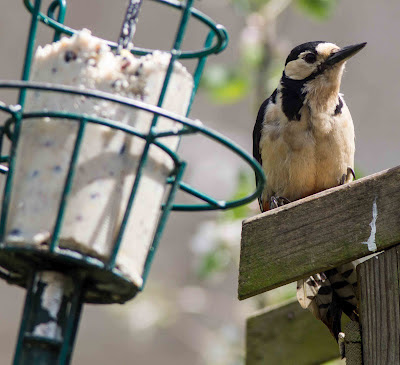 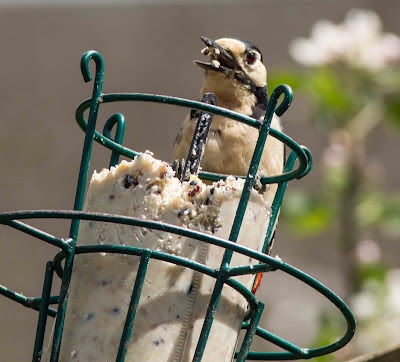 All clear? Tuck in. 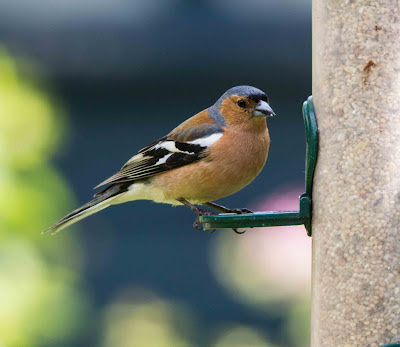 I wait till it's quiet.
Our most conspicuous visitors are the starlings. A few days ago we saw only three or four young birds but in the last couple of days the numbers have proliferated. Yesterday Barry counted forty starlings perched on the arches. They chatter and shriek from early morning until dusk. They enjoy communal feeding on the pergolas and communal bathing in the pond. Watching the harassed adults it’s difficult to ascertain whether the parents feeds their own young or whether they respond to all gaping beaks – I suspect the latter. 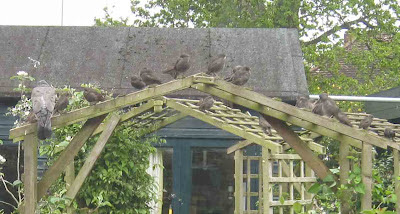 Wood pigeons need food, too. Some chance with all those starlings.
I watched the plump, cheeky starling babies as they alternately preened vigorously and called vociferously. One of them was paying more attention to his plumage than his safety. Good grooming is essential for a bird but he wasn’t looking about as frequently as he should, as, indeed, the adults do. I feared for his welfare. I knew a sparrowhawk would appear on the scene sooner or later and today was the day. He swooped down from the roof and carried off a screaming youngster. Barry was startled when he walked along the garden path a few minutes later to see the sparrowhawk on the ground preparing his feast. We may deplore the depredations of the sparrowhawks but they have young to feed, too. 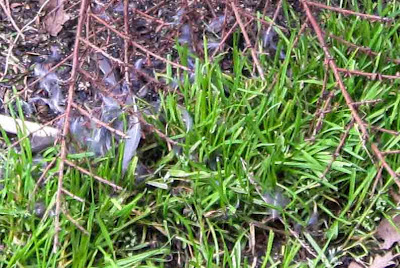 A few soft feathers are all that's left to commemorate a brief existence.

Another inspired bit of lunacy . . .

Another inspired bit of lunacy . . .


Robin Cooper is the alter ego of Robert Popper, creator and writer of ‘Friday Night Dinner’ and co-creator and writer with Peter Serafinowicz of ‘Look Around You.’
Posted by jabblog at Monday, May 21, 2012 No comments:

This was a student project created by David Newton at Goldsmiths College with music and sound effects created by Marc Sylvan.

It certainly brings the tapestry to life!

Where have I been?

Where have I been? Nowhere – just the usual round of dog walks, spotting kestrels and kites and deer and Bill and Beatrice Crow, of which more anon.

What have I been doing? My youngest daughter is getting married in July and I decided to make a wedding ring cushion. My preferred format was cross stitch but I couldn’t find a design I really liked. Then I saw a Hardanger project which really appealed. The only problem was that I had never attempted Hardanger before though I had made some drawn thread napkins many years ago. Could it be so very different? 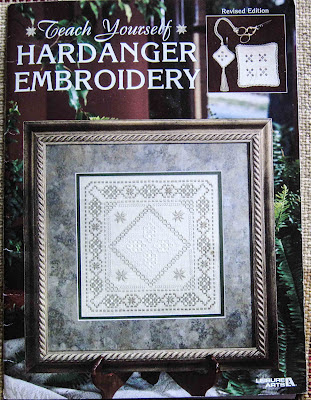 I bought a ‘Teach Yourself Hardanger Embroidery’ book and plunged in. Therein lies the problem – I am too hasty. Anxious to start and worried that I might not finish the task in time I began. I have always had a problem with tension - oh, the headaches, the worry!! – no, not that sort of tension. My knitting is too tight to move on the needles, my crochet stitches are impossibly taut, my cross-stitch buckles the fabric, hand-sewn seams are wrinkled. I was determined not to make that mistake and went rather to the other extreme. Kloster blocks are meant to retain the fabric when the material they surround is cut away and I was concerned that they might not.

I was working on Zweigart 28 Count Quaker cloth – that’s 28 hpi (holes per inch) – and the design was to be worked over two holes. I was pleasantly surprised at the speed with which the work progressed, then found I was one thread out and had to unstitch. It wouldn’t have mattered if it had not been a symmetrical pattern, but it was and it did – matter, that is. Eventually I finished the four hearts. By now the pearl thread had lost some of its lustre and was looking rather woolly in places where it had been worked and unworked and worked again. Undeterred I carried on.

From time to time I referred to my ‘Teach Yourself’ book to reassure myself that I was doing the right thing. ‘Remember the number four’ was burnt into my brain – that is, work over four fabric threads and leave four fabric threads between blocks. It wasn’t until I was anticipating the next stage of the work that I read that Kloster blocks usually comprise five satin stitches worked over four threads. Heart sinking, I looked more closely at the chart – yes, there were five lines indicating five stitches in each block. I considered rejigging the whole thing, adjusting everything to accommodate my mistake - too difficult! I then thought about unstitching the whole piece – the pearl cotton would look decidedly more like angora wool. Finally, I concluded that I must treat the piece I had been working on as my practice piece and started again. This time I read carefully to ensure that nothing else would go amiss and that I was doing the right thing in the right place. 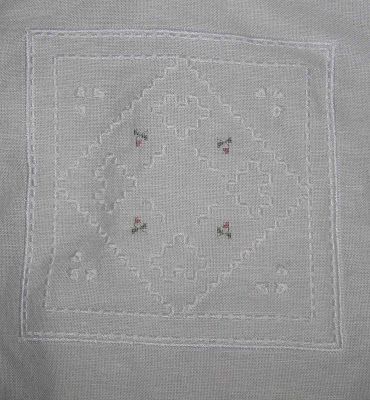 Before the cutting . . . I was tempted to leave it like this. 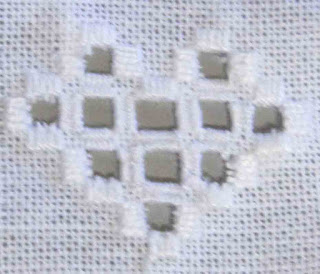 A practice heart, cut out and miraculously not falling to pieces.

Eventually, I finished the cushion. I hope I’m the only one who will recognise the many faults in it, though I expect I shall point them out, just as my mother always drew attention to her (very minor) mistakes,  but I enjoyed doing it. It doesn’t matter if Bethan and Robert decide they don’t want to use it and even if they do the little boy who holds it, (Robert’s nephew) will no doubt drop it or stand on it or wipe his nose on it – once I’ve given it to them it’s theirs to do with as they please. 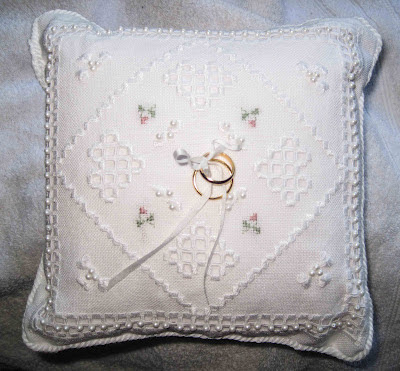 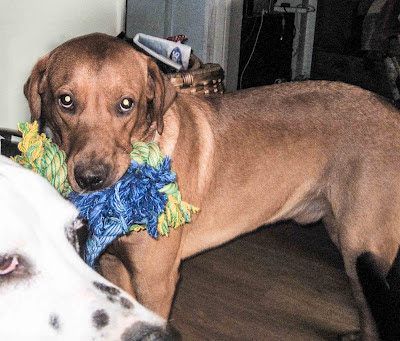 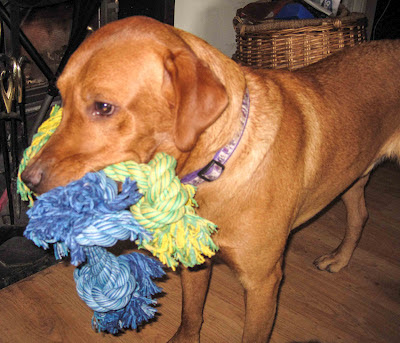 He picked up both of them, hoping Gus would chase him. 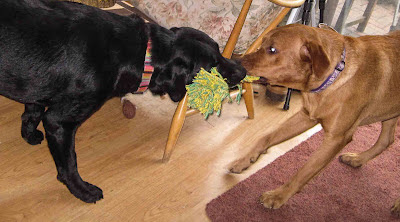 Gus was only too happy to oblige and soon they were playing with just one.
Posted by jabblog at Thursday, May 03, 2012 15 comments: