Come on , baby, light my fire 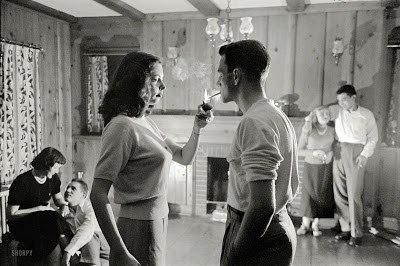 Sara was bored. She’d only agreed to come to the hop to keep her friend company. Now her friend had got off with a boy she’d been keen on for some time and Sara was left kicking her heels. She would have gone home but her friend was relying on her for a lift. A lad strolled over to her, hands in pockets, very casual. She wasn’t instantly impressed but maybe things were looking up.

‘Do you mean you’d like a light for your cigarette?’

‘You got fuel in that thing?’

‘Turn the flame down, can’t you? You nearly ‘ad me eyebrows there.’

‘Can’t get me fag near the flame.’

‘You could take your hands out of your pockets.’

Sara turned away, sighing. He wasn’t a prepossessing lad but he would have helped her pass the time until she was required to drive her friend home. Really, these village hops were a total waste of time.

Years later, fifteen or sixteen maybe, Sara was reminded of this conversation when she heard The Doors sing, ‘Light my fire’, and remembered the uncouth youth with the slovenly manners. Maybe he had become a musician, a songwriter. She’d never seen him after that night, not that she’d wanted to, of course.

The days of village hops were far behind her, thank goodness, and she’d managed to give up smoking, so no-one would ever again ask her for a light. 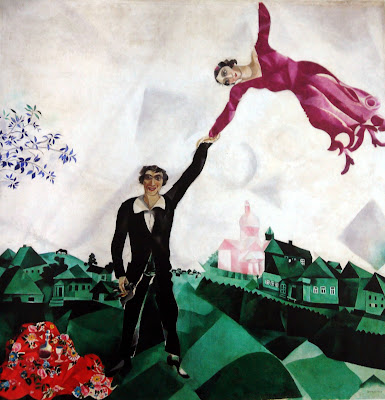 It was the end of the war, the Great War, the war to end all wars. The lucky ones, the survivors, were reunited with their loved ones. The others, the unfortunate ones, the bereaved, the deceased, the maimed, were forgotten in the spirit of euphoria that swept through the land. Later would come the harshness of facing up to a splintered future, of trying to re-establish normal life when so much and so many had been destroyed.

I noticed him standing at the edge of the crowd, watching. I moved towards him. Wordlessly, he took my hand and led me through a gate to a meadow. He produced a flask of wine and two glasses and we sat on velvet grass.

I didn’t know him. He didn’t know me. We were lost in the loneliness, the disconnection that follows the ending of a cataclysmic event that absorbed everyone for four long years. We came together for mutual comfort, to find passion and joy, however ephemeral.

You might say he swept me off my feet.

Thank you, Tess, for this prompt. Click here to see more responses.
Posted by jabblog at Sunday, June 16, 2013 22 comments:

Words for Wednesday - Anyone for cricket?

Delores from ‘The Feathered Nest’ offers six words as a writing prompt – virtuous, flannel, donuts, cartoons, inching, frayed.
Why not visit her and see what other writing has been inspired?

During the season commonly called Summer the sun-starved Englishman is sustained by cricket commentaries on television or radio. Often he will watch the television with the sound turned down and listen to the radio commentary.

Frequently he hears ‘Rain stopped play’. In previous times, a natural break might furnish an opportunity for cartoons to be played. Today’s commentators discuss cricketers of yore, choosing their candidates for a hypothetical all-time greatest team. They talk also of each other’s exploits on the cricket field, when dressed in white flannels, they kept wicket or stood at silly mid-off or backward short leg and tried to prevent the opposing team inching towards victory. They note the comings and goings of aircraft, pigeons and clouds and comment on their colleagues’ predilections for wine or salmon-coloured trousers.

The Faithful Fans send in cakes to the team in the commentary box, which are gratefully received and enjoyed during the long hours of a cricket match. I don’t think any donuts (doughnuts) have ever been offered, but I may be wrong.

Sometimes tempers are frayed, both on the pitch and off it; for example, an Australian batsman may miss the Ashes test series next month after hitting an English player in a bar in the early hours of Sunday morning. The victim, not badly hurt, indeed, not hurt at all, virtuously accepted his attacker’s apology. Undoubtedly they will meet again on the cricket field some time in the future and battle will be joined according to the strict and baffling laws of the game. 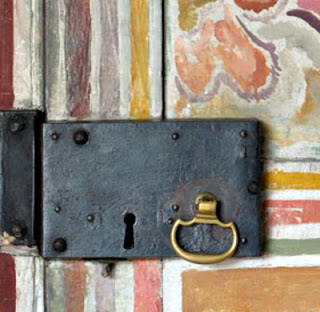 Why not visit her and see what other writing has been inspired?

His honeyed words seduced me,
We met near the ravine,
A clandestine arrangement -
He feared we might be seen.

I thought he looked so leonine,
He said I was divine,
And on the tallest broadest pine
He carved our valentine.

The engine of his passion
Beat hard within his breast,
At least that’s what he told me –
I know you’ll guess the rest.

Upon the greensward I reclined,
He took my hand in his;
What bliss was this, a simple kiss –
My fate was now defined.

For what came next was no surprise,
Except to this poor maid,
Like tables, eggs and groaning ghosts
I had been truly laid.

I peer myopically at the birthday cards. As usual I’ve forgotten my reading glasses  and there’s no time to go home for them if I’m going to catch the post. Must be quick - time and tide and the Royal Mail wait for no man. How old will she be tomorrow? Twelve? Mustn’t get anything too babyish – children grow up so quickly these days.

Ah! This looks promising – quite pink but then she likes pink; it’s always been her favourite colour, ever since she was a tiny girl. Oh look, are those birds perching in leafy bowers? That’s appropriate – she’s interested in bird-watching, even identified some in my garden the other week. I wonder what they are – I’ll have to ask her when I see her.

I don’t care for verses in cards – all that supposed poetry not scanning properly and with strangely convoluted sentences to make the rhymes fit – you know the sort of thing:-

Today’s a special day for you,
Full of joy and love and laughter,
Here’s hoping Happy Birthday to you
Will lead to happy ever after.

A quick glance inside – no verse, just . . . what does it say? I squint to make out the words. ‘Thinking of you’. That’s good – short and sweet and I can scrawl ‘Happy Birthday’ underneath it. I glance at the large clock above the door – only ten minutes before the postman comes to empty the letter box. Come on, hurry up! Luckily, I know her address by heart. I write the card and address the envelope and slip it through the slot just as the mail van pulls up. Phew! Job done!

A couple of days later I’m at her house. I’ve just given her my present and I’m glancing at the birthday cards on the window sill. Hmm, very nice selection – some quite ‘young’, others more adult as befits a – what do they call them these days? A tweeny? They used to be the in-between maids, the young girls who helped the cook and the housemaid in a large household. I gather it’s spelt differently – tweenie - so I suppose that makes it all right. Ho hum – when I was young there weren’t even any teenagers. Funny how language evolves.

She smiles at me. ‘Thank you for my present,’ she says. ‘It’s lovely.’

‘My pleasure,’ I say. ‘Did you like my card? I thought you might tell me what the birds are. I didn’t have my reading glasses with me when I bought it.’

Her mother laughs. ‘We thought that’s what might have happened,’ she says.

I confess I’m a little puzzled and look more closely at the card I sent. Now, my glasses allow me to see that as well as my scribbled greeting, ‘Thinking of you’ is followed by ‘at this sad time.’ I look again at the front. White doves are depicted prettily posed on pink roses.

I gasp but my granddaughter and great-granddaughter laugh again. My son comes into the room. ‘I don’t think you’ll forget your glasses again,’ he says and hugs me.

Thanks to Tess for this prompt. Go here to read other offerings.