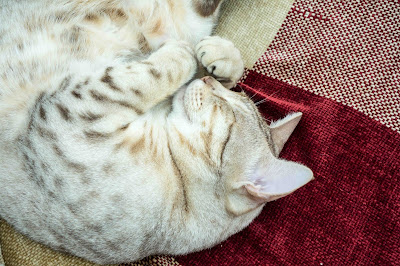 Herschel snoozes
It was early Saturday morning and we were enjoying a leisurely lie-in, idly watching rugby and occasionally dozing off. Susannah had taken Frankie to his swimming lesson and then carried on to her gym class. 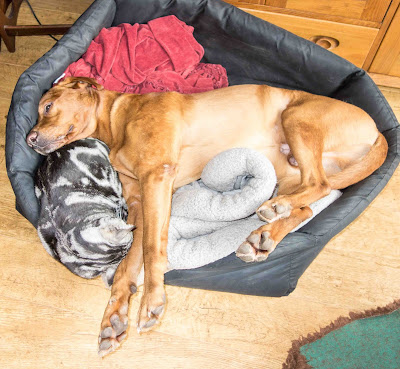 Bertie  and Jellicoe share a bed. He couldn't be a hunter, could he?
Bertie and Roxy were stretched out on our bed, joined from time to time by Herschel and Jellicoe. Isambard was lying on my legs so naturally I couldn’t get up – it’s very bad manners to disturb a cat. Jenna and Gus were snoozing in their beds.

We could hear sounds of cats playing. At least Solomon and Lenny weren’t screaming at each other so all was peaceful and there was no urgency for us to get up and proceed with the day. Susannah returned and there was an exclamation of disbelief and horror as she realised she had trodden on a dead but still pliant wood pigeon.

‘You’ve got to see this,’ she said so we duly arose. The hall was a mass of feathers surrounding a defunct avian. The scene in the garden of the capture and possibly the execution  was clearly demarcated by a sufficient number of feathers to make us believe there might have been more than one casualty. How can one bird have so many feathers? Still, as the old tongue twister has it, 'There are forty thousand feathers on a thrush' so there must be at least that number on a wood pigeon. I can understand why Labradors dislike picking up pigeons – all those feathers coming loose. 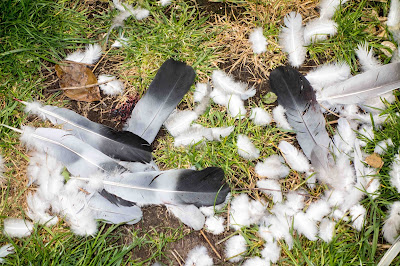 Not quite the remains of the day  . . .
After clearing up (We now have a clear idea of the colour of a pigeon blood ruby) we set about using our deductive skills to determine the culprit. We thought about Susannah’s cats. Solomon is little and likes catching dragonflies. 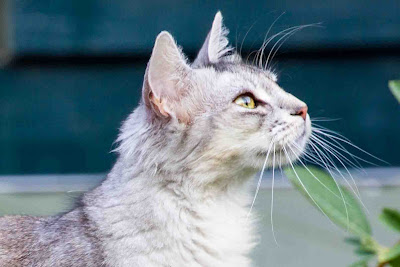 Solomon
Could it have been Lenny? Possibly. He may have lain on the poor bird. Lenny is ‘plump’ and lazy and limits his hunting exploits to moths. 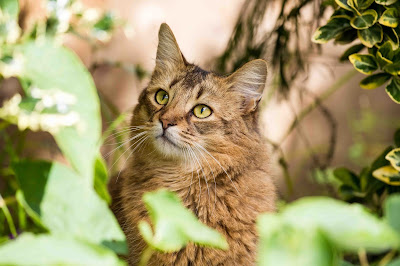 Lenny
It could not have been Isambard as he was pinning down my legs and in any case is not keen on leaving the company either of us or the dogs. 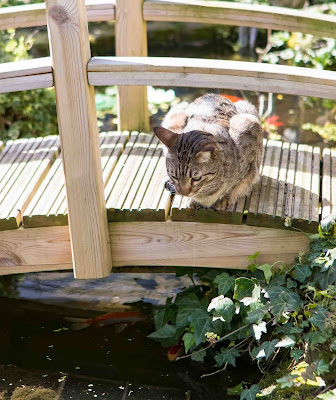 Isambard watching the fish
Herschel caught a squirrel not long after he was given the freedom of the garden but is not given to excessive hunting. We concluded it was probably Jellicoe. He watches the birds more than the others and so far this year he has killed a rat, a field mouse, a dunnock and a wood pigeon. He also caught a blackbird but it escaped. So, he’s not the most prolific of killers but he does his best, sadly. 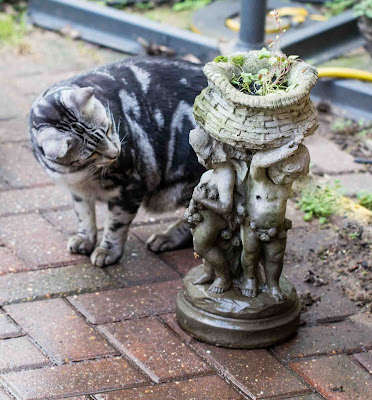 What is this?'
Our garden used to be busy with birds, particularly at this time of year when adults are feeding their young, but word seems to have got around in the bird fraternity that it is a no-go area. While we miss seeing them we are glad they no longer frequent our feeders. It is a small price to pay for the joy of seeing our elegant felines prowling through the shrubs, watching the fish in the pond or sunning themselves. 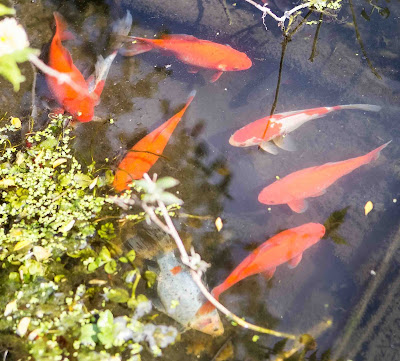 The UK is about to celebrate the Early May Bank Holiday on Monday 1st May. This means that families may get together for a barbecue, likely to take place under lowering skies and/or driving rain. Others may choose to take a long weekend break, clogging the motorways in a bid to escape the humdrum of daily life. Those who choose to stay at home often decide to use the extra leisure time to catch up on (or start) some gardening, decorating or d-i-y projects. This results in logjams of cars streaming to garden centres and d-i-y stores and then attempting to find parking spaces.

Customers impatient to begin their appointed tasks shoulder their way through crowds of other like-minded souls, locate their items and then queue to pay for them. By the time they reach home again, some two or three hours later, the will to achieve anything is dissipating. Of course, there are some organized folks who have already laid in their supplies but these are the people who work steadily at keeping everything in their houses and gardens tickety-boo, surely the most sensible way to proceed in life.

UK citizens enjoy – or endure – just eight Bank Holidays a year and for only two of them, Christmas Day and Easter Sunday, are the large shops shut (though not in Scotland on Easter Sunday) Small shops are free to open as they please on these days. Nonetheless, particularly if visitors are to be hosted, a siege mentality takes hold and huge amounts of provisions are amassed, with every conceivable potential taste being accommodated. It’s no good reminding anyone that the shops will be open again in twenty-four hours’ time.

The next surge in bulk buying, that is, the next Bank Holiday, will be at the end of May. Perhaps Summer will have arrived by then. If not, surely the August Bank Holiday will come up trumps – and speaking of Trump, who knows what he may have set in motion by then.

Anyway, whatever you are planning, even if it’s nothing, enjoy your weekend J