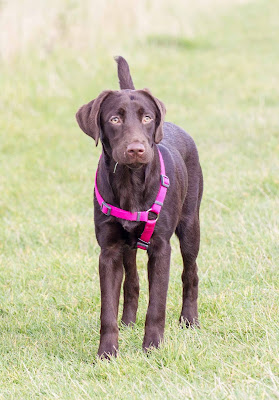 Why do dogs always manage to look half-starved whenever food is in the offing?

Jenna and Roxy are always the first to show interest but Roxy is the only counter-surfing Labrador we have had. All the Dalmatians were inveterate thieves and we are tempted to give some credence to the theory of transference of souls as Roxy was born just three days before Frodo the Faller died. 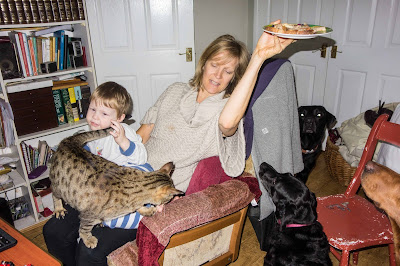 To be fair, the dogs were called over by Susannah to be tempted at close quarters by peanut butter on toast. 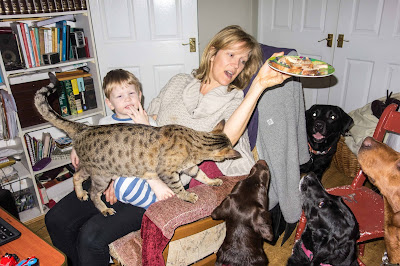 Isambard, one of our Ocicats, is always to be found near one or other of the dogs. He does not like peanut butter but joined his friends anyway. 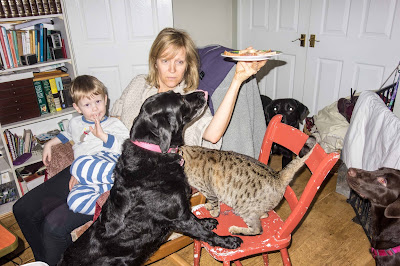 As the smallest – even Roxy, at not quite eight months old, is taller than her - Jenna is often to be found on hind legs, greying muzzle and questing nose searching for the hint of a sniff of a smell of food. 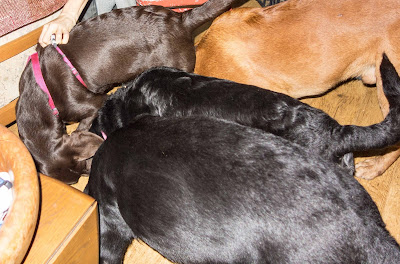 Eventually patience and perseverance were rewarded when the plate ‘fell’ to the floor – I believe it may have been after a nudge from Jenna’s nose.

Footnote: did you know that peanut butter is believed to promote shiny coats in dogs? Just the thought of peanut butter seems to have had the desired effect on our dogs!

House-training is defined in dictionaries as, among other things, Taming, Training, Disciplining, Domesticating, Schooling. I am immersed in the process and have been for some while as there are two young animals in the house. They are both at similar stages but I would suggest that the younger of the two is generally more reliable though still prone to occasional ‘accidents’. 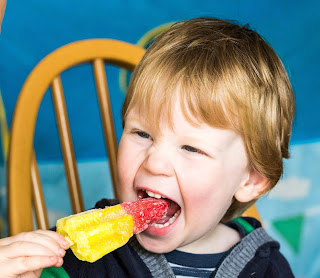 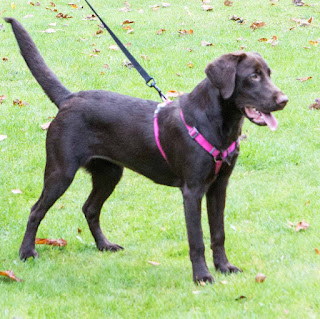 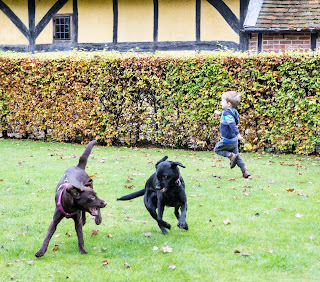 Roxy, Lolly (Bethan's dog) and Frankie last week
They are two young animals, just not of the same species. Frankie is a human animal and we will be celebrating his third birthday in three weeks’ time. Roxy is a chocolate Labrador and she will be eight months old in two weeks’ time.

There are advantages and disadvantages in the training of each of these animals. A young puppy, a ‘baby’ puppy, must be taken out to relieve itself after every meal and every time it wakes from its frequent sleeps. This includes the wee, small hours, a particularly inviting time to stumble from the comfort of one’s bed in the chilly pre-dawn or post-midnight to carry the warm, cuddly, licking, squeaky bundle of soft fur downstairs and outside. Small puppies need reassurance, encouragement and company and must be accompanied in all weathers. It is advisable to have them safely secured by a slip lead in case they disappear into the usually damp gloom of a shrubbery or a dark corner in an inaccessible part of the garden.

Even if you opt to confine your puppy to the ground floor, usually the kitchen, you will still have to get up in the middle of the night to let it out. If you don’t you will be greeted in the morning with a task that cannot be delayed, especially if the puppy has, shall we say, spread it around a bit . . .

When Roxy was a baby, not so very long ago, her night-time ventures coincided with the nocturnal visitations of our local rat population. These rodents, sleek, bold and well-fed (on fish food and bird cake), orchestrated the evening air with shrill squeaks and squeals. Our adult dogs would have had no truck with them but Roxy was simply curious, her head tilting from side to side as she attempted to catch sight of the creatures making such interesting noises.

However, a human baby is rather easier in that it can be enfolded in a nappy, at least the bits that leak so haphazardly. Certainly it must be kept as dry and comfortable as possible and when very new it requires food at irregular intervals throughout the day and predominantly, or so it seems to the sleep-deprived parents, through the night, As it grows, the intervals between feeds and nappy changes lengthen and parental dreams of periods of sleep longer than two hours may be realised. When it has entered toddlerhood the challenge of ‘potty-training’ arises. Talk at toddler groups centres on the relative success or failure of these still young and innocent human animals to master the whole messy business – and it can be very messy. Gone are the days of lifting your charge into the air to sniff its behind to ascertain whether a change is optional (wet) or essential (more than wet). Now the focus is on the manner of the toddler’s fidgeting punctuated with, ‘Do you want a pee/ poo? Oh, too late, never mind,’ as the third or fourth set of clothes of the morning are removed and replaced.

It is not just in the matter of ‘hygiene training’ (how euphemistic can you get?) that toddlers copy pets. Frankie kneels on the floor and drinks from the cats’ and dogs’ communal two-gallon bucket of water – it’s fun and he enjoys it and the water is clean . . . isn’t it? On other occasions he climbs into Roxy’s indoor kennel (crate) to lie down on her bedding. It’s cosy, it’s comfortable and it’s got some really interesting toys in it and he can carry them in his mouth, just like she does. Out for a walk in the forest he copies Roxy and picks up a stick - and puts it in his mouth.

More worryingly, and this is why toddlers and animals should never be left unsupervised together, he gets down on all fours and pushes his head against hers. She’s a puppy, she loves it and responds like a puppy but puppies play roughly and have sharp teeth and so we intervene, Frankie is learning – and so is Roxy.

So, in the matter of house-training, Roxy and Frankie are making progress but it’s easier with puppies than humans, I think.  Nonetheless, I’m sure it’s only a matter of time before I sit Roxy on the loo and put Frankie outside to relieve himself.