The following piece of nonsense is written in response to a prompt from ‘Words for Wednesday’ now retitled ‘Words for Wednesday on a Friday. This meme was started by Delores and now is hosted by various bloggers. The aim is to encourage writing – a poem, a story, a song, or whatever comes to mind, using some or all of the prompts.

This week’s words are supplied by Margaret Adamson and Sue Fulcher and can be found here. Please visit to read more offerings.

Is there such a thing as rampant solicitude, I wonder? Knocking one’s toes on a brick wall while tending one’s pincushion plants can be painful, it’s true, but it’s not good form to draw attention to oneself. It would seem excessive to have someone commiserating with one over such a foolish bump. Far better to remain silent, even while screaming inside, and possibly reeling from the shock, however slight.

The perfume from this member of the honeysuckle squad is beautiful and flowers in general are a joy to perceive. Having grappled with garden pests, I am glad not to have to face what seems like a courtroom of a flower show. My blooms are for my delectation alone and if they are smaller or apparently less perfect than anyone else’s, it matters not one jot to me.

Curiosity and the Cats

Curiosity and the Cats – and Lolly.

I think it is generally accepted that cats are curious and our Ocicats are certainly no exception. In addition, they are very attached to us, following us around the house. When we go to bed at night they all come up with us, choosing their spots on the bed, between the dogs. Somehow, Barry and I manage to carve out space for ourselves and some while thereafter the cats move on to our legs. They are heavy! Lenny the Somali, who is actually one of Susannah’s cats, comes to bed later and sleeps next to my head. He used to try sleeping on it but I dissuaded him from that.

Lenny is a very vocal cat and it is possible, even obligatory, to have lengthy conversations with him. He greets everyone, two-legged and four-legged, with enthusiasm. For a fairly small cat he has a loud and insistent voice. 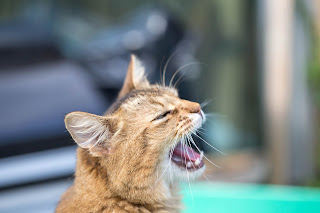 Lenny speaks!
We have two wooden buildings at the end of our garden. One houses the endless swimming pool and the other is a gymnasium. One morning recently, Barry stepped into the garden to be met by Lenny, vociferously miauing and running back and forth in the direction of the gym.  Barry chatted to him but Lenny was insistent that Barry should follow him. Naturally, one cannot disobey a cat and so he followed him. On opening the door he was met by Herschel and Jellicoe, who had slipped in behind him a few hours earlier and found themselves shut in. It was remarkable how persistent Lenny was. Clearly, he did not want his friends to remain trapped.

The next day Barry went to the swimming pool and when he opened the door Jellicoe shot out like a bolt from an arrow, desperate to relieve himself. When Barry had gone to check the water temperature the previous evening Jellicoe had followed him in, unnoticed, and had been locked in all night. We don’t allow our cats to stay outside at night and usually count them before we go to bed, leaving fresh chicken in the kitchen for their supper. Somehow, we had neglected to do this so poor Jellicoe was not only imprisoned but left to starve. Such cruel humans! He has been unusually attentive and lap-seeking since then.

In mitigation, we had been hosting Lolly the Labrador while her humans went on holiday, and had needed to ensure she went upstairs before the cats were fed. There were two reasons for this. The first is that Lolly is very good but not used to cats. She knows she must not chase them but sometimes the temptation proves too much. Our Ocicats treat her with disdain so she soon abandons her pursuit of them, although to be extra sure of safety they frequently take to altitude. The exception to this is Isambard, the most nervous and timid of our cats, who nonetheless does his utmost to make friends with her. Foolish Lenny and his brother Solomon run away and so Lolly is encouraged to give chase. Feisty Zula the Abyssinian, the smallest of them all, hisses loudly and wise Lolly keeps her distance from her. The second reason concerns the gate – a baby gate! – into the kitchen to prevent our dogs thieving the cats’ succulent raw chicken wings. It presents no obstacle to Lolly who is very athletic and leaps over with ease. She is not a greedy dog – for a Labrador! - but chicken is alluring and it is amazing how quickly a dog can siphon up food. 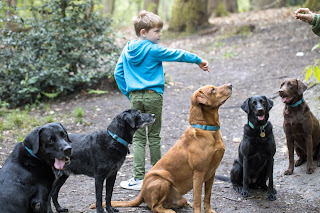 Frankie loves the dogs and enjoyed having an extra dog for a couple of weeks. Here they all are in Simons Wood, left to right : Gus, Jenna, Frankie, Bertie, Lolly, Roxy
Lolly has returned home now and life has returned to normal, or as normal as it ever is in our house. It is also a little quieter, because Lolly, being a London dog, is very protective of Bethan and her children and transfers that care to us when on holiday with us. She has a loud, penetrating bark and encourages the rest to join in. Five barking dogs are a great deterrent to potential intruders and much more effective than any doorbell.

Sadly, Lolly was getting used to the cats again and they were sleeping next to her, but next time she comes to stay we shall have to reinforce the lessons learnt this time – and last time – and the time before. Lolly is very intelligent but there are some things she pretends  - or prefers - not to understand.