ABC Wednesday X is for Xanadu


In Xanadu did Kubla Khan

Where Alph, the sacred river, ran

Through caverns measureless to man

Down to a sunless sea.

Xanadu, previously known as Kai Ping, was the summer capital of the Yuan Dynasty. The Mongolian Yuan Dynasty was founded in 1271 by Kublai Khan, grandson of Gengis Khan. It ruled China from 1279 to 1368. Emperor Kublai Khan made Dadu, present-day Beijing, the capital of his empire, but the summer heat and humidity of the city persuaded him to establish an alternative capital closer to the cooler plains of his native Mongolia.

Xanadu first came to the notice of the Western world after Marco Polo visited the city in 1275. It was portrayed by him and later by Coleridge as exotic, mysterious and filled with riches.
Thank you to Denise Nesbitt for her hard work in organising and hosting this meme.
Click here to see what others have found for X.
Posted by jabblog at Wednesday, December 30, 2009 10 comments: 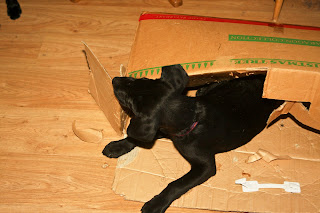 It's amazing the things that come boxed these days! Here's the little chap chewing his way out like a bird from an egg . . .
Grateful thanks to the organisers of these memes for their hard work!
To see what others have to offer please click on Camera Critters and Pet Pride
Posted by jabblog at Sunday, December 27, 2009 4 comments:

ABC Wednesday W is for Warrior

HMS Warrior was the pride of Queen Victoria's fleet and was the first iron-clad warship to be built. When she was launched in 1860 by Queen Victoria she was the largest, fastest and most powerful ship of her day. It took 35 months to build her and she was powered by steam and sail. She is the only surviving ship of her kind in the world and revolutionised naval architecture. However, the pace of technological development was so great that within ten years she was obsolete.

For the next century she was used as a depot ship, a storage hulk and then became part of the Royal Navy Torpedo Training School at Portsmouth. Following that she was used as an oil jetty in Milford Haven before being rescued and towed to Hartlepool where work began on restoring her.


Now she is berthed in Portsmouth Historic Dockyard where she is a popular tourist attraction. She is a stunning, sleekly built, strikingly impressive warship. The Warrior Preservation Trust's remit has been to restore her as far as possible to her original condition. A tour around Warrior shows visitors how Victorian sailors lived on board.

Thank you to Denise Nesbitt for organising and hosting this meme.

To see what others have been finding for 'W' please click here. 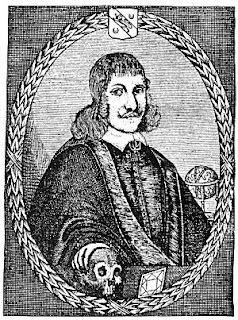 I frequently encounter odd characters in the moments before I'm quite awake but rarely remember them. To the best of my knowledge I never see the same 'person' twice. Do you?
Posted by jabblog at Tuesday, December 22, 2009 3 comments: 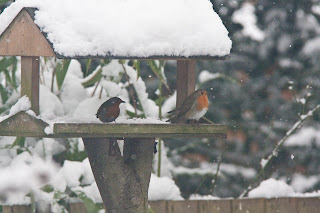 And we shall have snow,

And what will poor robin do then, poor thing?

He'll sit in a barn,

And keep himself warm,

And hide his head under his wing, poor thing.

This British Nursery rhyme is thought to date from the 16th century. It was intended to teach children to associate safety, warmth and security with home while allowing them to empathise with the situation of the robin.

The birds have been busier on the feeders since the weather has become colder, building up their fat reserves for the weeks to come and the huge expenditure of energy in the breeding season which starts much earlier than we may appreciate. During the autumn and early winter the robins have been defending their territories preparatory to pairing off. The female robin does all the chasing and eventually decides on her mate after visiting several males. The first indication of a pairing is two robins feeding alongside each other but they will not breed until Spring.
Posted by jabblog at Monday, December 21, 2009 7 comments: 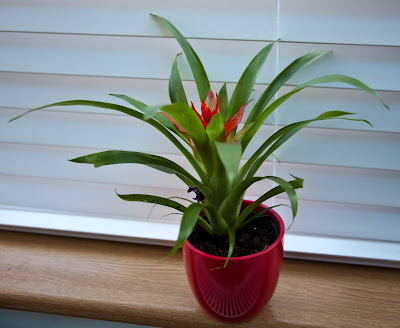 These bromeliads were named in recognition of the 18thcentury Spanish naturalist Anastasio Guzman and grow wild in the tropical and sub-tropical forests of America. Most are found in the highlands of Colombia and Costa Rica and are epiphytic but some of the larger ones have adapted to grow in the soil. Dead leaves, bird and monkey droppings decompose and nourish the plants and the rosettes of leaves collect rain droplets to water them. 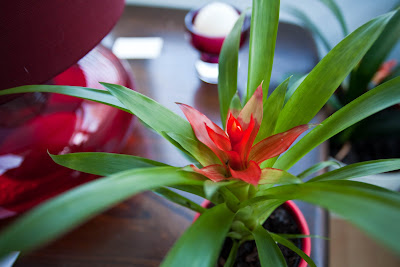 It is relatively easy to keep bromeliads as colourful house plants. They require bright light and humidity but not direct sunlight which might scorch the leaves. Water should be poured carefully onto the leaves from where it can filter down to the soil. Too much water causes rot! 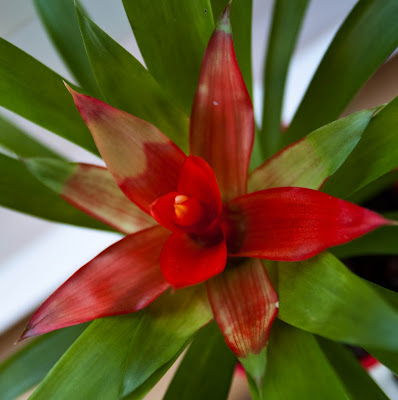 Thanks are due to the hardworking members of the TF team who organise and host this 'blooming' meme!
To see other contributions please click here.
Posted by jabblog at Sunday, December 20, 2009 17 comments:

My apologies for the strange formatting . . . it's driving me insane (not a difficult undertaking!!) 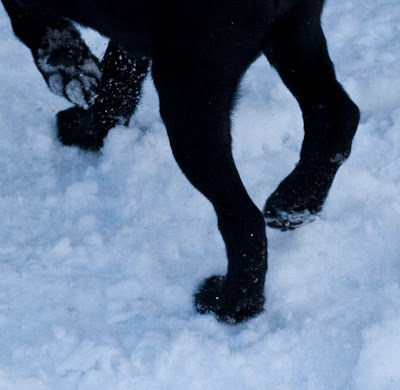 A different interpretation of snow shoes 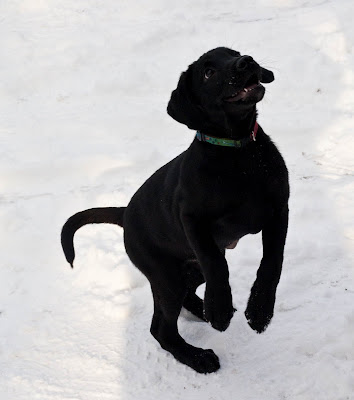 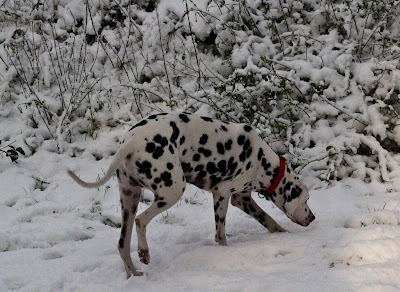 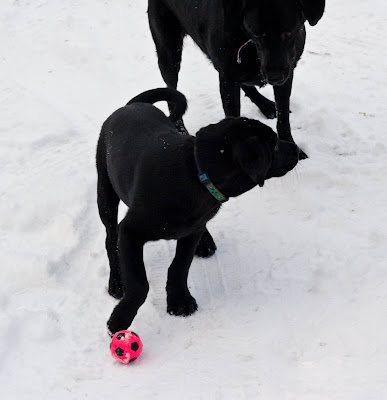 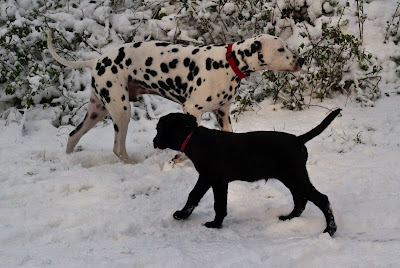 Gus: Frodo, I want to be as big as you one day.
Frodo: Dream on, little boy. 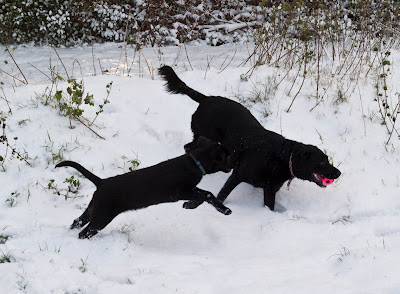 Gus: Wait for me, wait for me! 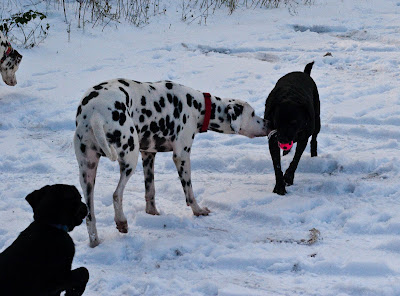 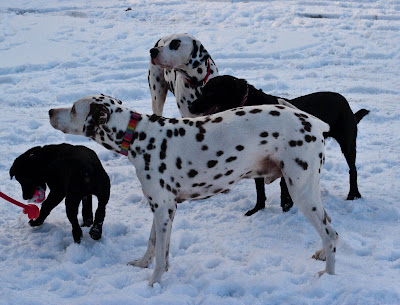 Frodo and Buddy: Is there food?
Jenna: That's the way, Gus, but wait for it to be thrown first.
Gus: Look, look - I've got it! 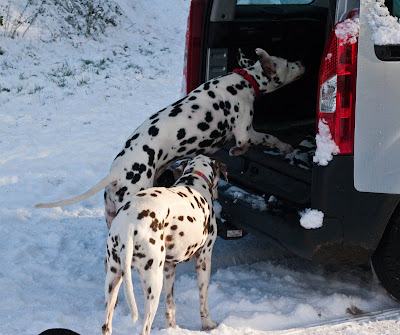 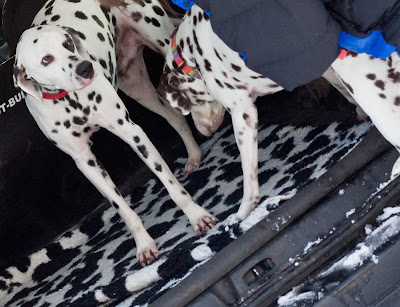 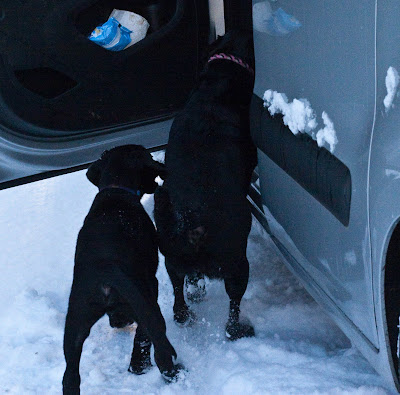 Jenna: Come on, Gus, Dalmatians in the back, Labradors in the front.
Gus: Hurry up, Jenna, I'm tired and I want to go home. 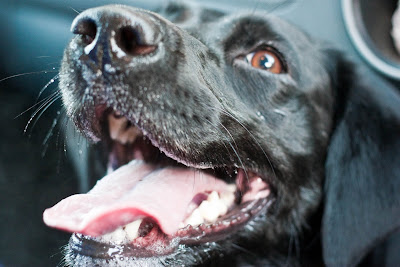 Jenna: I really enjoyed that walk. Thank you! 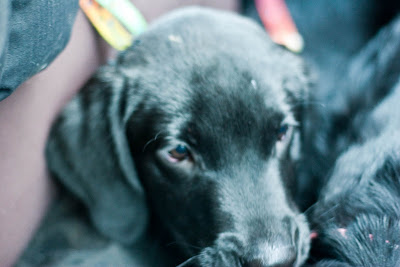 Gus: I had a good time too but now I'm so sleepy . . . z ... z ... z
Thank you to the organisers and hosts of Camera Critters and Pet Pride. We appreciate the trouble you take.
To see more critters and pets please click on the appropriate title.
Posted by jabblog at Friday, December 18, 2009 14 comments: 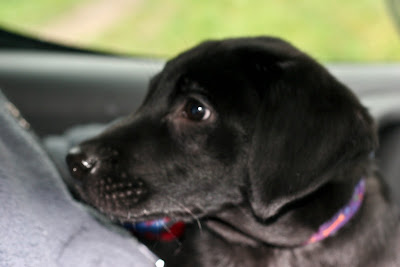 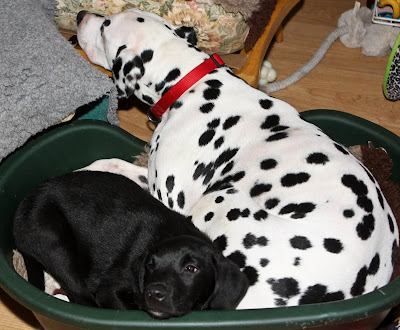 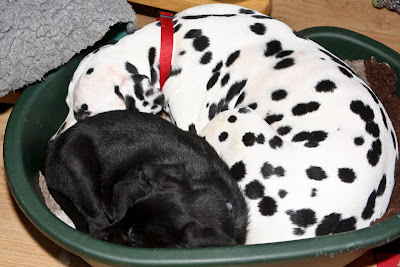 Yesterday dawned with a heavy frost and felt bitterly cold. It was no surprise when snow started falling. When we took our afternoon walk the light was fading fast and mist was thickening. It was invigorating and the dogs had great fun. 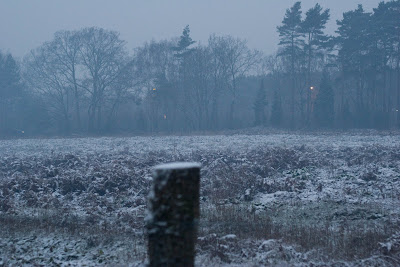 Earlier in the year these 'fields' were thick with trees. 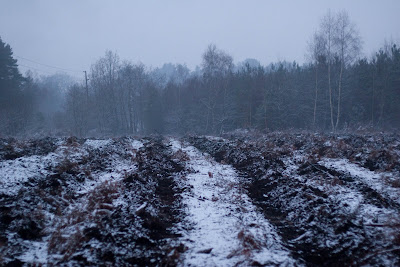 They were harvested, the ground turned over and saplings planted. Our familiar landscape had changed and revealed new walks. Fresh ponds were created. 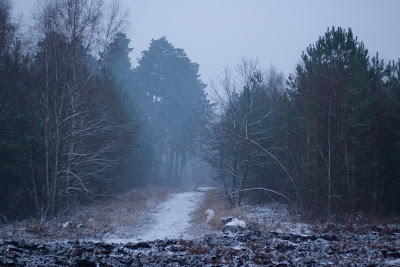 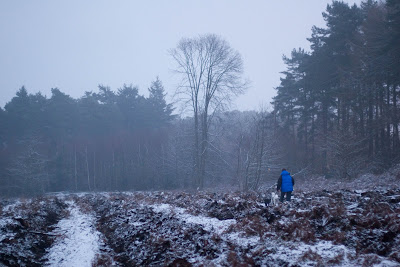 This morning was beautiful - blue sky and bright sunshine and it felt warmer but as the day wore on dark clouds gathered and there were several falls of snow which didn't settle. 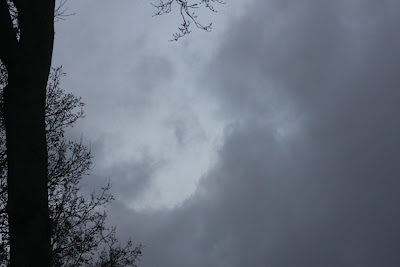 By the middle of the afternoon, around 2:30, clouds were scudding across the sky changing the skyscape every few seconds. 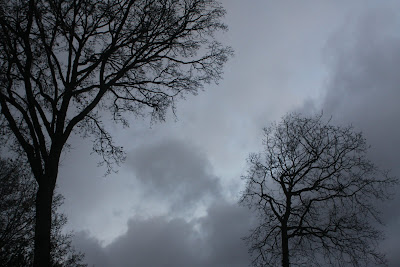 Full darkness came early and with it a drop in temperature. Ice is making the ground treacherous and we're promised more snow tomorrow. Because our weather changes so rapidly on this small island we don't usually have long spells of one condition and never seem to be prepared for 'bad' weather so doubtless there will be all sorts of transport problems. However, most schools will have broken up by the end of the day so there will be a noticeable drop in the volume of traffic on the roads. 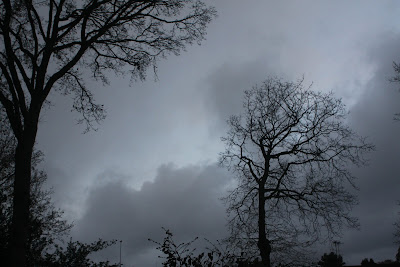 Thank you to the hard-working SkyWatch team for organising and hosting this fascinating meme. To see skies around the world please click here.
Posted by jabblog at Thursday, December 17, 2009 25 comments: