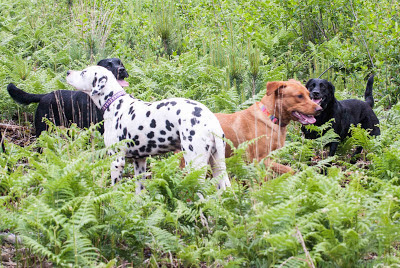 Dogs listen and understand more than their humans realise. This was splendidly demonstrated early last week when we had to go out for a few hours.

For several years we have been discussing refurbishing our staircase. We considered removing the entire staircase but then settled on replacing the metal bars that remind us of our proximity to Broadmoor, the well-known high security psychiatric hospital. 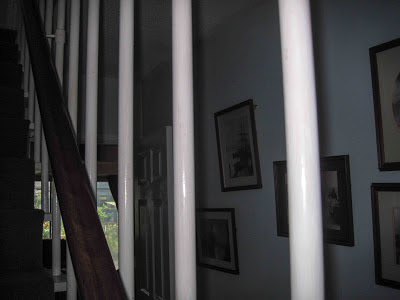 We have pored over banisters and spindles, newel posts and caps, hand rails and fittings, imagining how lovely they will look and what an improvement they will make.

The late, great Dominie Dalmatian was the first dog to start helping us with our home improvements.  When she wasn’t chewing Cariadd’s collar she nibbled the bottom stair. She was a gentle girl, not given to drawing attention to herself, and always anxious to please so her efforts were minor, barely noticeable.

Buddy Liver Spots was the next Dalmatian to attempt home improvement. His efforts were more conspicuous than Dominie’s but the stair carpet remained untouched. Frodo the Faller, the last of the Dalmatians (thus far) has never been interested in d-i-y, his energies and efforts being concentrated on truly edible items, though he did ingest one of the brass fittings from the cooker hob – only to be expected as it probably held the hint of a ghost of a trace of a smell of food.

Jenna Labrador attempted a little carpentry in her youth, but it was her younger brother Gus who showed prowess and a sense of design. By the time he had grown out of puppyhood the carpet was frayed but still intact on the notched bottom stair tread. Then Bertie Labrador, our golden boy, joined the family. He has demonstrated a remarkable aptitude for interior design and is fully au fait with our plans. Thus, when we returned home last Tuesday, we were greeted by Gus and Bertie, ecstatic to show what they had achieved in our absence. (Jenna and Frodo were in another part of the house and so had no part in the proceedings.) 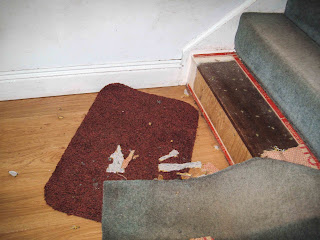 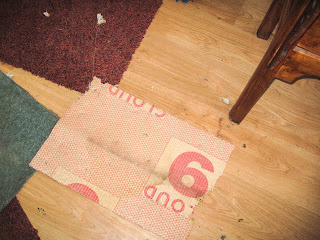 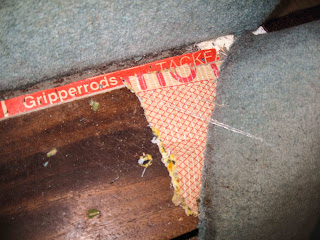 I have no doubt Bertie was the instigator as he has shown much more interest in completing the job. Indeed, the next day I discovered him removing the last piece of underlay – what a helpful boy! He has the soul of an artist and when not engaged in adapting parts of the house, he likes to whittle, removing kindling from the log basket to shape into small sculptures. To the untutored eye these diminutive masterpieces resemble match sticks.

Deprived of wood he takes lumps of coal and spreads them across the floor in pleasing patterns. We expect him to exhibit at the Tate Modern one day. A display of Bertie’s coals would take far less room than ‘The Bricks.’