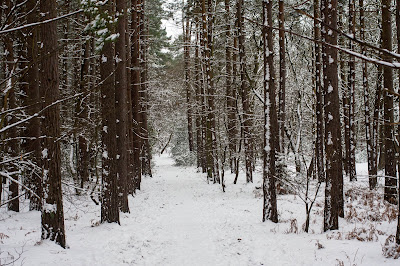 Except in the far reaches of the British Isles, snow is not a common sight in winter and *if it lasts more than two weeks it’s cause for comment by national media. When snow is forecast a kind of war-time comradeship emerges and a siege mentality sets in as people flock to the shops to stock up on essentials. Everyone gets very excited when it falls and settles. Everything grinds to a halt – schools are closed, electricity supplies are cut, public transport is reduced or abandoned altogether and there are hourly warnings on radio and television not to go out  ‘unless your journey is really necessary.’ 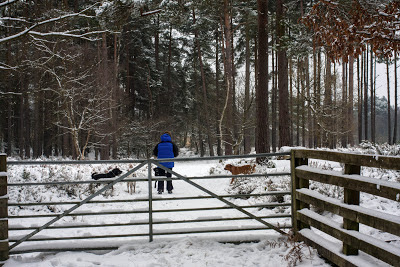 This is on Wildmoor Heath. There are many gates separating different areas. Cattle graze in some paddocks. On Sunday we reached a gate with a notice informing us that cattle were grazing in the paddock and dogs should be kept on leads. Barry asked a woman coming through the gate if there were any cattle in there. 'No,' she replied, 'I haven't seen any cattle up here for years.' We went confidently through and lo and behold there were several Charolais cows contentedly munching whatever cows munch. We're quite sure our informant wasn't blind! The dogs were well behaved and took no notice of the cows.
Intrepid reporters are sent to the four corners of the country – at least those that are experiencing the unusual phenomenon. They stand on windswept bridges or in the middle of roads telling their open-mouthed public how extraordinary, almost unprecedented, is the sight before them. Yes, travelling is really difficult when snow falls – could it be anything to do with the hordes of cameramen and journalists clogging up the roads telling the nation how it’s advisable to remain indoors? 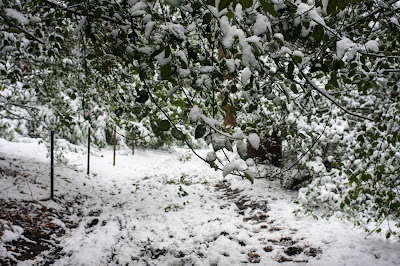 Well-trodden and very wet in places . . .
Usually, pedestrians are only seen on the streets when taking their children to and from school and often simply from their cars to the school gates but when snow appears the normally deserted roads are filled with parents pulling children on sledges and families building snowmen and igloos. We even see people on skis! It’s funny how they cannot travel to work or school but can still summon the courage and strength to go out and play in the snow.

The unusual influx of people onto the streets is always rather worrying because some drivers, whose journeys are really necessary, are still attempting to navigate their cautious way across unfamiliar terrain. Being unversed in car handling in adverse conditions they are inclined to skid and slide and swerve unnervingly close to small people engaged in snowy pursuits. Sometimes young hotheads take the opportunity to practise handbrake turns along residential streets. Should such morons ever be allowed on the public highway, regardless of weather conditions?

Three years ago when we had a heavy fall of snow our ‘dog car’ got stuck (yes, our journey was really necessary – large dogs unexercised for any length of time are more perilous to health even than thick snow) and walking on frozen snow, even with pacer poles, was difficult so we decided that in future we would be fully prepared. Accordingly, Barry bought a snow shovel, snow socks for the car and chains for our walking boots. Naturally, the next two winters brought very little snow and absolutely no occasion to use our special equipment.

This year, when around 5”/12½ cms of snow fell on Saturday, the time was ripe to try out our winter paraphernalia. The snow shovel was put to good use and the drive has remained snow-free and safe to walk on (though more snow is forecast overnight – indeed has just started falling!) 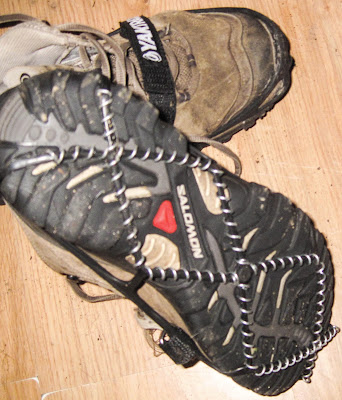 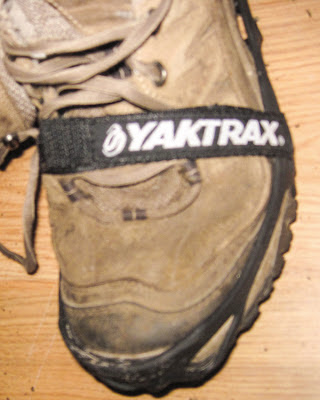 The most revelatory things were the Yaktrax. They were difficult to attach to our boots but they make walking so much easier and safer. They are not good indoors on bare wooden floors – in fact, they’re probably quite hazardous unless you fancy practising ice-skating. The only things we haven’t yet tried are the snow socks. Maybe they will come in handy in another three years J (I may live to regret that flippant remark!)

Although I mock and despair over the parlous state of our transport system and the way we just cannot cope with a relatively small amount of snow, I do like to see that fresh, bright white, the most humble objects transformed into things of unutterable beauty, the trees supporting their crystalline burdens in a clear blue sky. I love the smell of the air, the feeling as it slices into my lungs, the crunch of the snow beneath my feet, the sight of my dogs frolicking in delirious delight. I relish looking out from my warm sitting room to an alien landscape and seeing the birds - and a hungry squirrel - feasting on fat cakes and peanuts and seeds. For me, snow is a rare delight and I embrace it – so long as my journey isn’t really necessary – apart from for the dogs, that is. 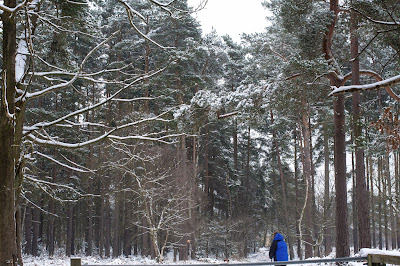 *Thank you to all who pointed out my error. What I intended to say and should have made clear is that snow that lasts more than two weeks takes on the significance of an historical event, causing excited reporters and presenters to delve into the record books to identify whether *this* snowfall has exceeded all others in terms of depth and disruption. Already, we are told that serious floods will follow the thaw - the most serious ever? We shall see. I do sympathise with those most severely affected. It's no cause for levity, I know.
Posted by jabblog at Tuesday, January 22, 2013