When Sam died we thought that Daisy would be a comfort to her mother but Biddy was inconsolable. Indeed, Biddy seemed to need something to mother and Daisy had not fulfilled that role since she was weaned. We decided that a puppy would help heal Biddy's heart and we set about finding one. Barry wanted a running breed and we considered an English Setter but breeders advised us that Setters would run off into the next county at the slightest invitation. Whisky had shown us that Labradors were walkers rather than runners (in later years we would discover this not always to be the case.)

After considering and rejecting various breeds we gradually came to the realisation that a Dalmatian would fit the bill. I had always hankered after these elegant dogs but Barry had demurred, thinking them beautiful but stupid. Conversations with many breeders corrected this misconception. We duly tracked down a breeder with puppies almost old enough to go to their new homes. Avril and Bill Bale-Stock were experienced breeders and handlers. Their very successful champion dog at the time was Appaloosa Spring Classic and he had sired a litter of fourteen. The dam was having difficulty looking after so many pups so when they were three weeks old Avril took six of them back to her house to hand-rear them. Before she agreed to allow us to go and see them she ascertained that I was not house-proud. Dalmatians shed short white hairs all year round. The hairs attach themselves to any and everything and are therefore transported across continents. There are people who have never been near a Dalmatian who have nonetheless found a scattering of them. The dogs also shed their black or liver hairs but these are not so noticeable.

With great excitement we drove to South Wales to meet breeders and puppies and dogs - spots before the eyes, indeed. Bethan, then three, went outside to play with the puppies which milled around her, nipping and tugging at her clothes and she loved them. I believe it was her demeanour with them that convinced Avril and Bill that a Dalmatian would fit into our family. Bethan told them that Biddy was sad because she couldn't lick Sam's ears any more. We chose a pretty little bitch and dreamt all night of spotted dogs. Two weeks later we brought her home. We wanted a name that would reflect her Welsh origins and decided on Cariadd, a Welsh endearment equating to 'Darling' or 'Dearest'. Avril had told us that dogs never forget their first owners and indeed many years later when Bethan was at Swansea University Cariadd would always perk up and look around as we crossed the Severn Bridge.

Biddy and Daisy greeted the newcomer enthusiastically, playing with her exuberantly but carefully in the manner of adult dogs with puppies. 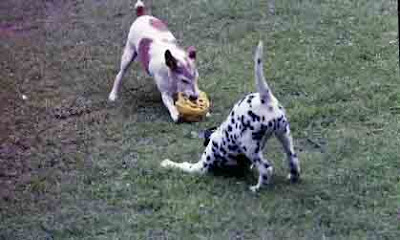 Biddy and Cariadd play ball with an old squeaky toy of Bethan's.

Although Cariadd grew to be much, much bigger than the Jack Russells, in her mind she was always a little dog and preferred the company of small animals. 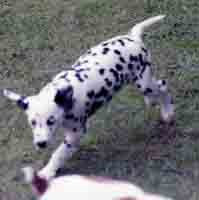 At this stage Biddy was much faster than Cariadd

In fact, she was a safe refuge when the cats fell out with each other for they would sit on her, safe in the knowledge that they would not be attacked. 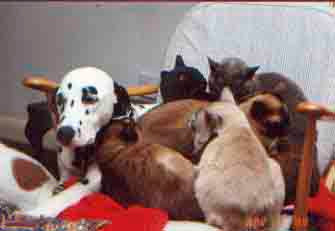 A very patient and long-suffering Cariadd with six or seven previously-squabbling Burmese cats crowded around and on her. Biddy is on the left.
Having been brought up with the stick-loving JRs Cariadd developed the dedication to extremes, picking up and carrying huge logs around the forest as she accompanied Barry on his runs. Parts of the forest have gates or narrow openings into further sections and when she came to these she would manoeuvre her tree trunk through with great dexterity. Unlike Sam she never attempted to take them into the car. 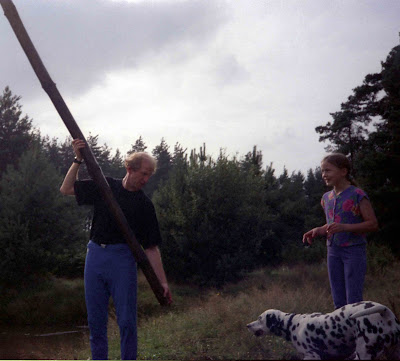 Barry and Bethan after running with Cariadd. Barry holds up a typical Cariadd 'stick'. Cariadd is smiling the Dalmatian smile which looks like a snarl but is actually an expression of pleasure. Many breeds of dog smile in similar fashion.

After Biddy died Cariadd and Daisy became closer. Both quiet dogs they demanded little of each other more than companionship. Old dogs sleep a great deal but look for each other when awake. We always wish for our animals, as for our loved humans, that they will slip away peacefully in their sleep. It rarely happens and dear Daisy had to be eased on her way. For such a little, unassuming creature she left a huge hole in our lives and we needed a new focus, for Cariadd too. That's how our next canine arrived!

Cariadd was a very healthy dog but when she was about fourteen she developed a gastric torsion and would have died without surgical intervention. She recovered well and was fit until she was sixteen when she became unable to maintain her balance. It transpired that she had a growth on her spinal column which was not treatable and so inevitably she had to be helped across the Rainbow Bridge.

We have found that the best way to come to terms with losing a loved companion is to haul out the photographs and videos and laugh and cry as we remember the youth and energy and then the all too rapid progression to the final dignity of advanced age. We often ask ourselves why we have these animals that ultimately break our hearts. There is no logical answer but that life would be poorer, less fun, more self-centred. Pets help us to maintain our physical, mental and emotional health. Certainly they restrict our movements – we cannot take off on a whim or decide to stay overnight after a day out instead of going home. We have a responsibility to them but we are so much richer for their company. They give unconditionally and we are privileged to share our lives with them.