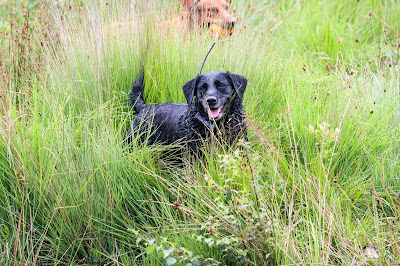 Watching and waiting
Jenna is eight years old today. We should have called her Slippers because she sounds as though she’s shuffling in the house. 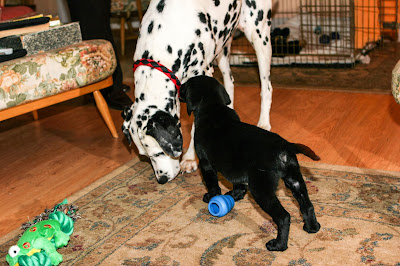 Dominie with Jenna
She was the first Labrador we had had since Whisky, many decades before. 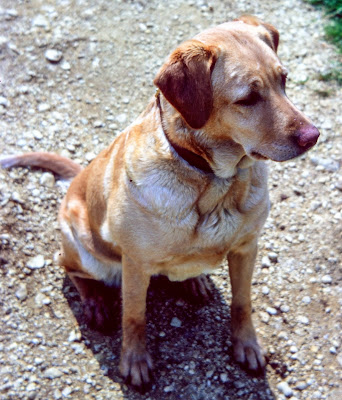 Whisky - that was her name when she came to us at 3 years old - we were going to change it but didn't. 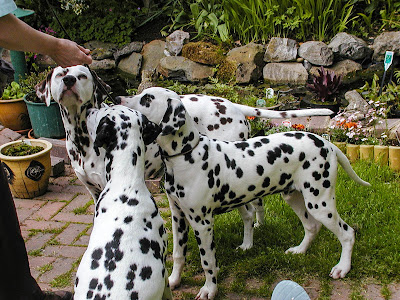 Dalmatians are as greedy as Labradors and will do anything for food . . . particularly steal it . . . 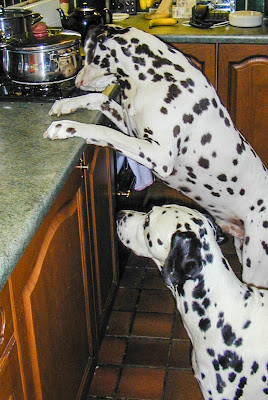 Dominie encourages her nephew, Buddy
Jenna was eight weeks old when we brought her home and was not in the least fazed to find herself in the company of three large, unfamiliar spotted dogs. In the following years she has seen the Dalmatians reduced through natural causes to one (Frodo) and welcomed the introduction of her half-brother Gus and another Labrador, Bertie, from the same kennels, as well as five Ocicats, the first two dying far too young, at three and six years of age. 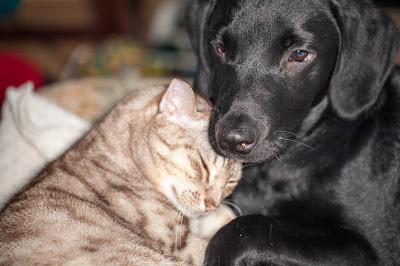 Jenna with Monty
She left her breeders and her litter-mates without a backward glance and has remained an exceptionally friendly dog. She actively enjoys visiting the vets and is always rewarded by the receptionists and the vets with treats which she consumes quickly, unlike her Labrador companions who won’t eat anything while there. She approaches all people and dogs with a wagging tail and a smiling face, completely trusting everyone she meets and, strange as it may sound, that is quite worrying for not everyone is moved by the kindest motives and there have been cases of dog-napping in the forest. In her younger days Jenna was apt to disappear for lengthy periods, following interesting trails, and so we acquired a tracker for her in order to trace where she was. It transpired that she was never far from us and since she has had Labrador pals she has been less inclined to wander. Nonetheless we maintain a vigilant eye on all our dogs and keep them close to us.
A pocketful of biscuits is invaluable in holding their attention. 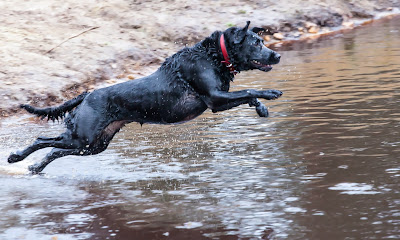 Lift-off!
Jenna loves to work and a good walk involves lots of water, thick cover and much retrieving, the best sort being that which engages her Labrador friends and relatives and their brains, noses and tails - the wagging accelerates as the quarry (usually a tennis ball and occasionally a biscuit!) is located. 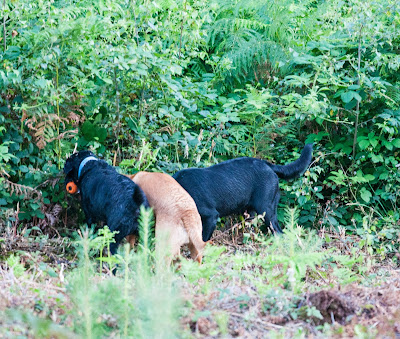 Searching - the tails aren't wagging yet . . .
Jenna is a delightful little dog - she never did grow into her big feet – and an affectionate and willing member of the pack we are privileged to lead. 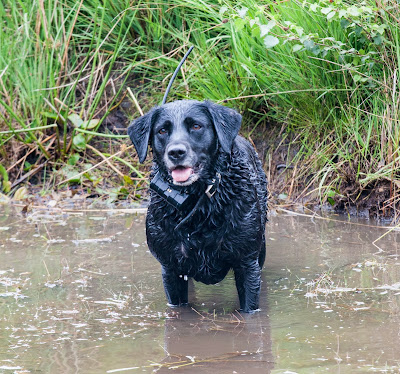 The expression says it all - engaged, willing, happy.