Mag 195 Messing about on the river

Thanks to Tess Kincaid who organises and hosts this meme J To read more Magpies please click here.
Messing about on the river 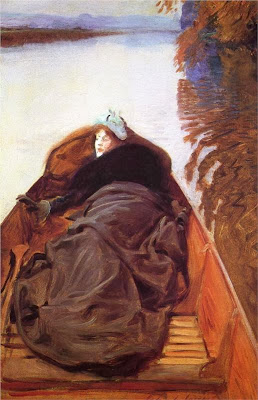 ‘Would you like to come out on my boat?’ he asked. I accepted, excited at the prospect and thrilled he had invited me. ‘We’ll go on Wednesday,’ he promised. ‘I’ll bring a picnic. There’s nothing like fresh air for stimulating the appetite.’

He had told me little about his boat. That he was very proud of her could not be denied. The more I probed the less he said about her, just simply, ‘I know you’ll love her as much as I do. I can see you now, reclining as we navigate the river.’

My imagination took flight. In my mind’s eye I was leaning back against comfortable cushions in the cockpit, a glass of wine in my hand, as he stood at the wheel, the captain of his vessel. I wondered fleetingly if he would wear a blazer and yachting cap, a cravat knotted stylishly at his neck. I thought it unlikely – he was more of a jeans and tee shirt man.

It took ages to decide what to wear. It was October and the weather unpredictable. Wednesday might be very warm but could just as easily be chilly and damp. It could even change throughout the day. No matter, I could always go below if things became too uncomfortable on board.

Tuesday was bright and cold and the weather forecast predicted more of the same for the following day. Accordingly, I dressed in warm trousers and navy waterproof jacket, a spotted scarf providing just the correct jaunty air. I admired my new boat shoes, bought specially for the occasion – I knew how particular boat owners were and I didn’t want to be accused of leaving nasty black scuff marks on deck.

He picked me up in his snazzy sports car and we proceeded at speed to his mooring. We would be there in about thirty minutes, he told me, and as the minutes ticked by my anticipation grew. He handed me out of the car and put a proprietorial hand under my elbow, leading me along the tow path. I craned my neck for the first glimpse of his boat and when I finally caught sight of her I stopped in my tracks and gasped. She was beautiful – not huge, but a lovingly maintained clinker-built yacht, the autumn sun glancing off her brass rails and enhancing the rich mellow colour of her sides.

He squeezed my hand and smiled his wonderful smile. ‘You like her, don’t you? I knew you would. Shall we go aboard?’

I nodded, eager to explore his lovely craft. I was surprised when he stopped next to a scruffy skiff tied up just in front of the wonderful yacht. I was alarmed when he clambered onto it, flinging his arms out to counterbalance the dangerous yawing of the flimsy boat.

‘Come on, hop aboard,’ he said cheerily and held out his hand. As I stepped forward a cloud passed over the sun. I tried to match his enthusiasm as he sat opposite and pulled on the oars but I was uncomfortably aware of the proximity of the grey water and the sharp wind that had sprung up. Soon the rain came and as there was nowhere to go to escape it I had to sit tight, my hair streaming with water and my feet turning blue, not just with the cold but also with the dye from my new shoes. The picnic sandwiches sagged and disintegrated and I would happily have exchanged the chilled wine for a thermos flask of hot coffee.

He turned for home – that is, the mooring – his mood undaunted. ‘Not quite a baptism of fire,’ he joked and I grimaced, shivering. I thought that at least I would thaw out in his car but it turned out that he couldn’t put up the soft top so our return journey was glacial. The car heater was inadequate against the rain and wind. I was never gladder to reach home and immerse my aching bones in blessedly steaming water.

The next time he rang – and the time after that – and the third time – I declined his invitation. In any case, I had such a streaming cold that I wished to do nothing more than shut out the world and huddle under cosy blankets.

We didn’t go out together again. The last I heard, he had sold his skiff and bought an old houseboat.