ABC Wednesday - V is for Vale

Image courtesy of National Trust
The Vale I am thinking of is The Vale of White Horse in Uffington which is now in Oxfordshire but was historically part of Berkshire.
The White Horse, more than 3000 years old, is probably the oldest hill figure in Britain. The white colour comes from the chalk underlying the whole area. The Horse strides across the Berkshire Downs near the ancient Ridgeway path, which is said to be the oldest ‘road’ in Europe.
No-one really knows why the Horse was created. It was made by digging deep trenches which were then backfilled with chalk. It is 374’ (110m) long and can only be seen clearly and completely from the air, so may have been a sign to ancient gods.
It doesn’t look much like a horse and some have mused that it might be a dragon, possibly the very dragon killed by St George.  Nearby Dragon Hill has a single white circular mark, which folklore claims as the spot where the dragon slain by St George shed its lifeblood. Legend has it that the dragon’s blood so poisoned the ground that grass never grows on this spot. Others have suggested that the Horse is a representation of St George’s steed. A little further along the Ridgeway is Wayland’s Smithy, of which more next week. 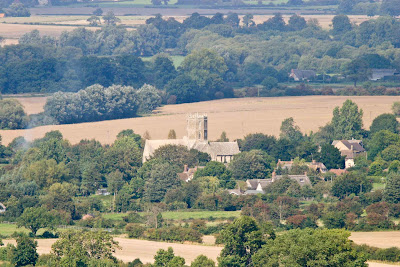 The area is beautiful, mostly given to arable farming now, since the decline of its dairy business in the early years of the 21st century. It has a plethora of pretty villages through which I used to drive to my first job in Stanford in the Vale. It is where Barry and I started our married life and where our first child was born and so it has a special place in my heart. 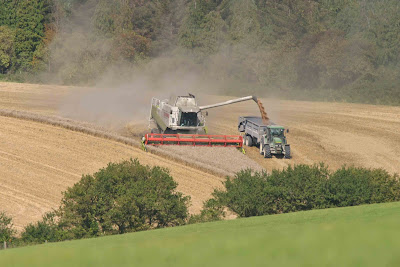 A few years ago we travelled back to this part of the country and spent a sunny afternoon on the hill below the White Horse. We decided not to walk to the chalk figure because the notices (which were never there 40 years ago!) asked that dogs be kept on leads and our three Dalmatians needed to run and play. As they did so we watched and took in the pastoral views. 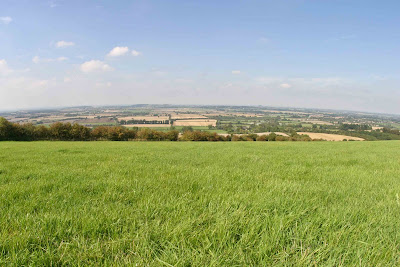 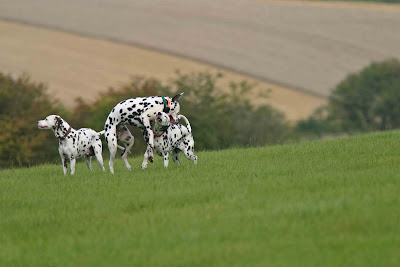 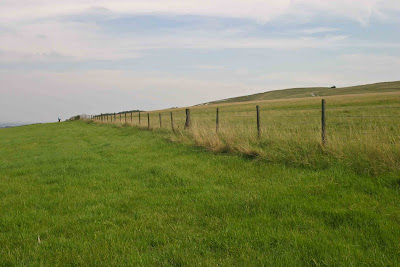 White Horse Hill can just be seen in the upper right quarter of this photo
The site is owned and managed by National Trust.
Thank you as usual to the Vivacious Denise Nesbitt and her Versatile, Vigorous, Valiant team who organise and host this weekly meme.  Click here to enjoy more Victory Vs and maybe join in.
Posted by jabblog at Wednesday, December 15, 2010