It’s not cold outside during the day but the nights are still relatively chilly. Is this why we are seeing outdoor beasties indoors?

A couple of evenings ago Winston Ocicat was sitting staring fixedly at the garage door (the door that leads from the house to the integral garage)  I followed his gaze to find a caterpillar making its way carefully down the door frame.

It was not yet low enough for Winston to attempt an attack, or, as he would put it, to play with it, but he was observing closely. Obviously he was planning his strategy.

Winston is not often left to entertain himself on his own. As soon as he begins to leap about he is joined by a couple of enthusiastic Labradors who jump on him and rough him up in the nicest possible way. Eventually Winston turns on his back and bats the dogs with his closed velvety paws. He has never had cause to unsheathe his claws and use them in anger . . . yet.

On this occasion, late at night, he had little more than a passing interest in vagrant wildlife – a comfortable bed (ours!) was calling. 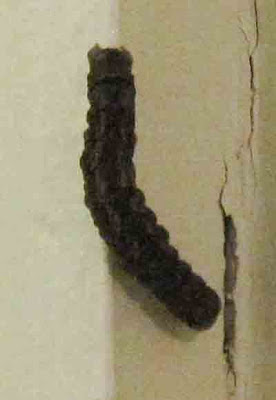 It cast a fine shadow
He watched as I took photographs of the intruder which seemed not to like the close attention and swerved away from its downward route and wavered off to the side.

I have looked in various books and at online sites but I cannot identify the caterpillar from the rather muddy photographs I took. The only ones I think it resembles turn out to be the produce of rare visitors to these shores so not very likely. It disappeared soon afterwards so I didn’t have another opportunity to study it and take further shots.

This morning, as I opened the door to receive a parcel, I noticed a small beetle. 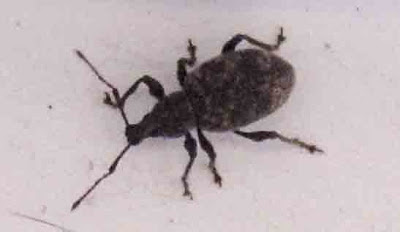 Obligingly, it allowed itself to be photographed. I have discovered it to be a Vine Weevil (Otiorhyncus sulcatus) a common garden pest! 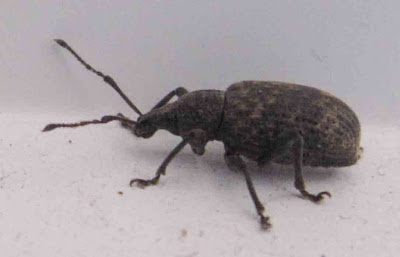 The adult beetles eat the leaves and shoots of many plants but it is their offspring that do the greater damage. The larvae destroy the roots of pot plants and do much damage to greenhouse crops. It looks such an inoffensive little creature – how could it be so evil?