I didn’t often play with my food when I was a child. It wasn’t encouraged but occasionally I could dream as I ate. Dipping a spoon into the Lyle’s syrup tin and drizzling it onto a pudding, making sticky patterns with it and watching as it smoothed itself into a golden puddle was one such occasion. I tried to write my name with it but it was too quick for me. I loved the tin and never realised the lion was actually a rotting carcase. I was more interested in the words – ‘Out of the strong came forth sweetness’ - beautiful words to accompany a tooth-aching syrupiness.

Breakfast often featured eggs in some form. My favourite was soft-boiled eggs. First the egg was taken from the pan of boiling water and put in the egg-cup. It was too hot to touch but the urge to open it and reveal the rich orange-yellow yolk within its white coat was almost too much. Tap, tap, tap on the top of the egg (not too hard, don’t want to smash it), slice it off with a knife and spoon out the white from the eggshell – no yolk in the top - a little salt and pepper to taste, if desired, and then the feast could begin. To eat it with an egg spoon was enjoyable but by far the best way to appreciate it was to have soldiers. Buttered toast was sliced into strips and dunked into the inviting gooey sunshine – utter joyJ

All too soon the egg was consumed and the final game could be played. Quickly the shell was turned upside down in the cup, for all intents and purposes to look like an egg waiting to be eaten. It never fooled anyone but it was fun. 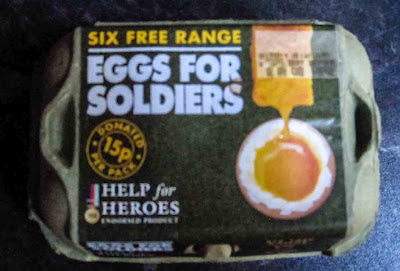 When I saw these ‘Eggs For Soldiers’ the other day I smiled at the memories they evoked then quickly sobered as I realised they were being sold in aid of Help for Heroes. I wondered how many soldiers can no longer eat their breakfast eggs without help – and how many will never eat again.