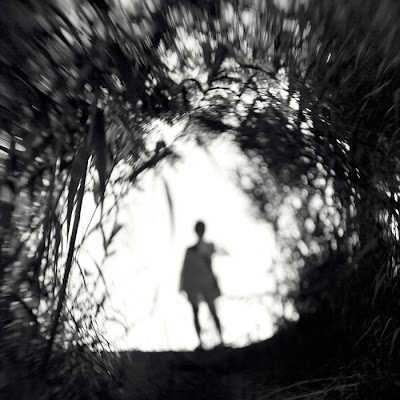 It was dry in here, deep in the heart of the brambles, a safe place to hide.  He couldn’t tell how long he’d been here but the noise of his pursuers had long since died away.

He had no idea why he had been targeted.  He was simply going about his business, not bothering anyone, when they’d spotted him and decided to give chase.  There were so many of them and they made a deafening noise.  He’d had to keep a cool head and engage all his cunning to give them the slip.  Being smaller and slighter had enabled him to squeeze through openings they couldn’t navigate.  He reckoned that had gained him valuable seconds and enabled him to outrun them.  He was lucky to have remembered this bolt hole.  He sighed and dozed off.

He heard the girl before he saw her and stared bleary-eyed through the brush.  Had she been sent to find him?  He studied her.  She looked harmless enough but experience had taught him it was impossible to judge people by appearances.  She hadn’t spotted him yet and if he remained stock still she might never notice him.  He just wanted to be left alone.  Couldn’t anyone understand that?

The girl moved forward, searching the ground, then cried out as thorns grabbed her legs.  He shrank back into the shadows as she struggled to free herself.  Disentangled at last, the scratches on her legs bleeding, she turned and tramped away.  He listened as her footsteps faded and all was silent again, save for the distant calls of birds and tiny insects tracing their busy paths across dead leaves.  A beetle scurried across the packed earth.  He watched it lazily then tucked his nose under the white tip of his tail and slept once more.