Tess Kincaid hosts this meme. Thank you, Tess J Each week she posts a photograph from her archive to act as a visual prompt and followers respond as they see fit. Some versify, some don’t. Click here to see entries and perhaps join in. 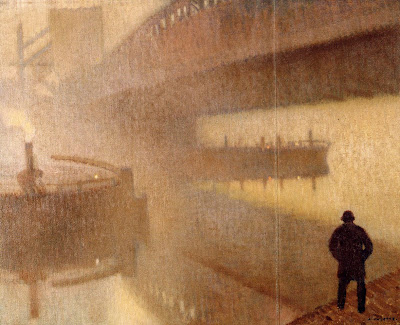 Under Windsor Bridge, 1912, by Adolphe Valette

He trudged along the river bank, hands thrust deep into the pockets of his heavy overcoat. Nearing the bridge, he stopped, pulling his hat down over his head and tightening his scarf against the invasive damp. Horses’ hooves clattered along the road overhead and the rumble of carriage wheels drummed and hummed in the dank air.

A yellow grey fog drifted across the greasy water, wreathing the passing barges and diffusing the light from their lanterns. The dreariness of the scene suited his mood and he stared into the murky depths of the river, remembering.

There was only one thing that would release him from his melancholy. Cleansing the city of its filth made him euphoric. Those do-gooders who claimed that all human life was to be valued were wrong. He saw the expression in the eyes of the girls as he strangled them and knew they were grateful to be released.