Thanks go to Willow who organises and hosts this meme J To read more Magpies please click here. 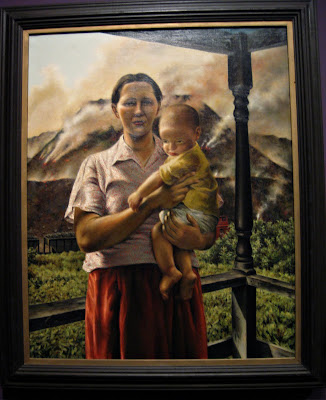 Smoldering Fires, Clarence Holbrook Carter, 1904-2000
Columbus Museum of Art
Image courtesy of Tess Kincaid
Black gold
They had been born in the village, the daughters and granddaughters of miners, the wives and mothers of more. They had learned forbearance and endurance. The distant boom of explosives was the background to life. When the slag heaps smouldered on the mountains, the pungent smoke choking and stinging, they turned their backs and continued their chores.
Their men would return at night, blackened and weary, seeking food and oblivion. Each morning they watched as their fathers and brothers, sons and grandsons trudged back to their labours. Unspoken fears gnawed at them all. The mines were nearly worked out, the men having to burrow deeper where the air was stale. They mined naked in narrow tunnels, chipping at the coal face and breathing in the dust, laying explosives and retreating to safety until the blast released more seams.
The siren at the end of the shift was a signal to the women to hasten - hot water to fill the baths, a hot meal to grace the table – and to give thanks that another day had passed without incident. Sounded at any other time it signified disaster.
The women flocked to the mine entrance, dread twisting their hearts and robbing them of coherent speech. They prayed, automatically, desperately. They beseeched deliverance for their men – ‘Let him live, let him live’, ‘Let him die quickly, let him not suffer.’ They begged strength for themselves and forgiveness for all sins large and small. They promised impossible purity and faith if only their men could be spared.
Their entreaties were futile and seventy-five families were changed forever.
Trapped underground, generations lost, all in the pursuit of black gold.
Posted by jabblog at Monday, May 02, 2011