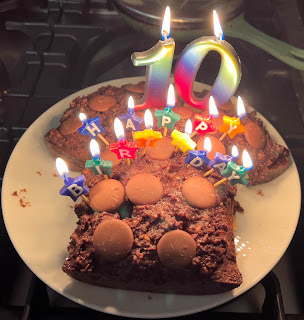 It was Frankie’s 10th birthday yesterday. His class had a trip to *Sky television studios, which made it a very special day for him. The children made a ‘television news special’, which was most impressive. Some were scriptwriters, others operated the cameras and the rest were presenters and reporters. Frankie was a reporter.

He had a lovely day and felt he had a better understanding of what his mother, Susannah, does. She’s a television producer and he was pleased and proud to tell the people he met about her, some of whom she may have met through work, anyway.

After school, we had a birthday tea at our house. Susannah made a delicious chocolate cake, which was of enormous interest to the dogs. 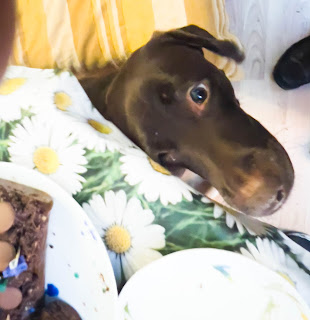 I know chocolate's bad for me, but couldn't I have just a little piece?
Please?

In addition to Roxy, we had Susannah’s dog, Arthur, and Lottie, James’s dog. James is Susannah’s fiancé, but he was away doing what barristers do best, so couldn’t join us. 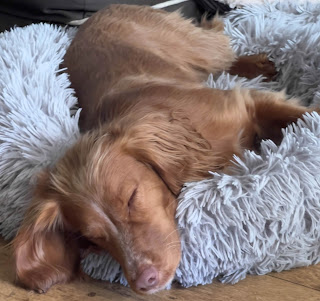 Usually, he's moving so fast that it looks as though there are two of him!

The Sky Academy offers children the chance to work with its cutting-edge technology, including broadcast-quality cameras, green screens and touch screen tables. Visitors write, shoot and edit their Fact, Fiction or Future video.