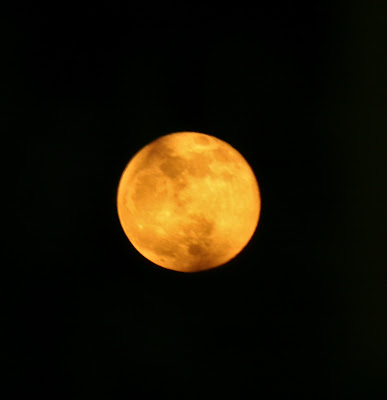 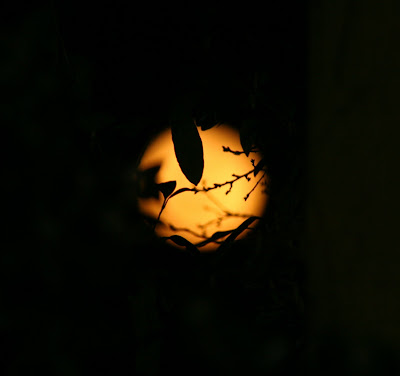 Moonlight
The stars around the fair moon fade
Against the night,
When gazing full she fills the glade
And spreads the seas with silvery light.

Sappho (c.610 – 570 BC)
Translated by H. De Vere Stacpoole
There was a full moon last night or so I believe. We couldn't actually see it as it was overcast and raining so these photographs are from March 2006. I love the golden glow and it is apt that one of the names for this month's moon is the Lantern Moon.
Another of the names for the March Full Moon is the Sap Moon which seems appropriate for a month in which dormant plants are waking up and sending out leaves and tendrils and getting on with life. Even on a blustery, dull day such as today, the fresh green leaves and the daffodils which have finally put in an appearance brighten the view and gladden my heart. The birds are busier than ever, flying in in pairs, trios and gangs. Yesterday I saw goldfinches flirting in and out of the holly tree and the woodpeckers are drumming vigorously, pointing out decaying trees. The starlings, as ever, squabble and screech and long-tailed tits skitter in like tiny, prettily painted shuttlecocks.
This full moon is also called the Crow Moon. 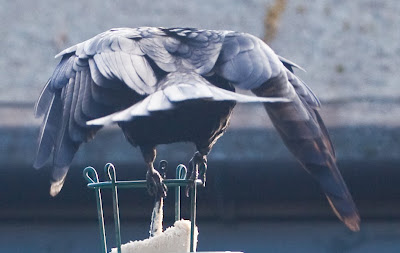 There are always crows to be seen in and around the garden – after all I live in Crowthorne! – and though they are the rapscallions of the bird world, I very much enjoy their antics. They are remarkably big birds but somehow manage to balance on the bird feeder to peck energetically at the fat cake. 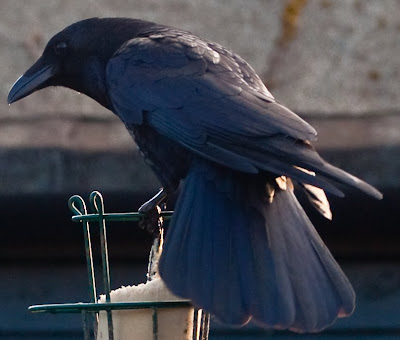 They will also perch on the arches and bow solemnly to Jenna-the-Labrador and call to her. Although she's the same colour as them I don't really think they regard her as a four-legged crow but it is amusing to watch. She just gazes back at them. I think Gus will answer them – he's rather more vocal than his sister and, of course, still only a pup. This morning a pair of magpies, also corvids, courted gravely on the bird table. Occasionally, jays and jackdaws visit but they are shyer relations and rarely stay long.
The final name I have for the moon is the Lenten Moon which really needs no further explanation.
As we approach Easter I wish you all a peaceful weekend, whatever your beliefs or lack of them.