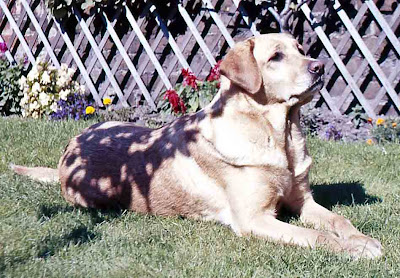 Watching the ‘Collie Walk’ video in my previous post brought to mind a couple of memories.
I first started work in a village where everyone knew everyone else. Most of the families had been living there for generations. The vicar, a charming ex-Naval padre, was closely associated with the school. He often talked to me, bringing me up to speed on the family circumstances of the pupils. His turn of phrase was frequently colourful, evidence of his service life.  He was proud of his son who had had much to do with designing hovercraft.
The headmistress, Joan, was a pleasant, amusing woman who had lived in the village for many years. She had been the inspiration for one of John Betjeman’s ‘young women’. Her husband lectured at the nearby college in Shrivenham where my soon-to-be husband was studying. They had a collie with a strong herding instinct and it was not unknown for the dog to herd the children along the road into school. This dog also attended church, remaining quiet throughout the service until the time came for the vicar’s sermon. The dog would then walk out of the church, no doubt watched ruefully by some of the congregation.
At that time, dogs at Shrivenham were commonly allowed to attend lectures with their masters (there were only male military students then) Our yellow Labrador, Whisky, lived with Barry and accompanied him everywhere. Consequently, she was a very well-educated dog in all aspects of life, appreciating beer and bar snacks, and swift and neat at helping herself to tempting morsels in people’s hands – or shopping baskets. She liked hedgerow fruits, too, sucking blackberries off the thorny brambles. During lectures, Whisky was quiet and unobtrusive most of the time but there were occasions when she sensed that the young officers around her, all fit and healthy and fidgeting to do something physical, were bored. She would then produce a loud drawn-out yawn and wander to the front of the room to sit next to the lecturer and look at him. This caused much mirth among the students and broke the tedium, at least momentarily.
Whisky came to school with me on a few occasions when Barry was away and was a great favourite with the children. Though she was a large dog she nonetheless considered herself a lap dog and would clamber up so that when the children looked up from their work they would see her gravely observing them rather than me. She enjoyed joining in their games, too, and was instrumental in teaching at least one child to overcome a fear of dogs.
You can read more about Whisky here. 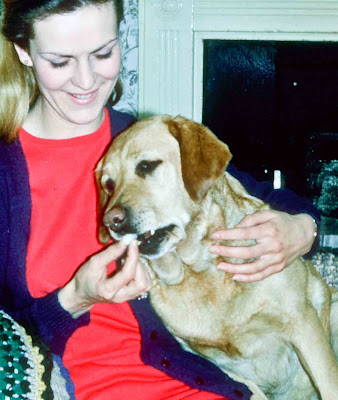 Every dog has an individual personality and a lifetime of living with dogs bequeaths a wealth of memories.
Posted by jabblog at Saturday, November 20, 2010