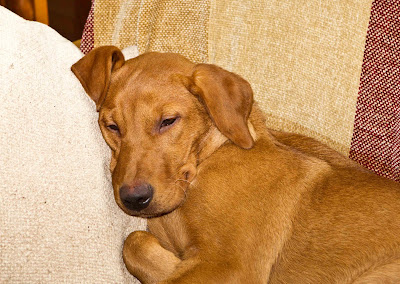 The first indication for Bertie that something different was happening was the sight of the Master and Mistress filling black bags. His inquisitive nose investigated as we attempted to make enough room in the bedrooms for guests to reach their beds. An indecent amount of washing and dusting, vacuuming and tidying went on as his familiar surroundings became unfamiliar. Settee cushions were upended so that his friends and relations could not climb on them. Winston, being a cat and therefore superior (and lighter) managed to balance on them and Bertie developed a trampoline act on the webbing. Meanwhile, big strong Gus panted and worried over the changes taking place.

As the house was divested of dust, extraneous goods such as old music tapes, mountains of odd socks, old pillows and clothing that adult children had stored and forgotten, chewed slippers and remnants of the various childhoods of now grown offspring so it simultaneously filled with parcels and boxes and enough food to feed an army. The dog freezer (for frozen dog food, not dogs) was filled and the old freezer in the garage was brought into service to accommodate the overflow. Five dogs and two puppies consume a lot of food in a short period. Likewise the human freezer (for frozen human food, et cetera, as above) and the fridge were organised to within an inch of their lives to take in the extra provisions needed to sustain human life during the Christmas period when, Heaven forfend! the shops would be closed for an entire day. (Actually, I was horrified to discover that the local shop would be open until midday on Christmas Day.)

The most disturbing thing for Bertie was when his puppy pen was dismantled. Suddenly his dining room, rest room and secure zone disappeared. This was the downstairs pen in which he had eaten and slept in safety from his first day in our house. He shared it with Buster when he visited and now it was gone. Oh, calamity! 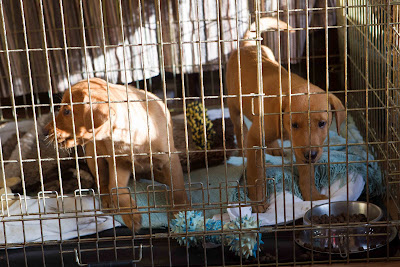 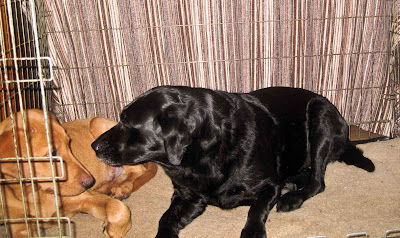 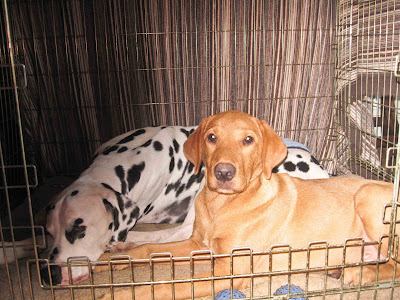 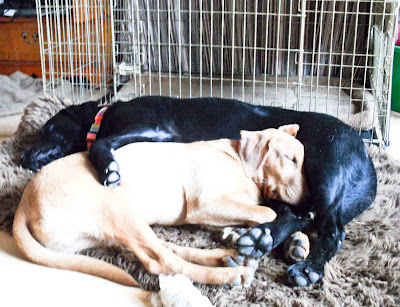 In front of the pen with Gus
Finally the house was ready. Bethan and Robert arrived on Friday to be followed by Bertie’s brother and his family. Everyone brought piles of boxes and bags and more food and all the effort of the preceding days seemed to have been in vain. 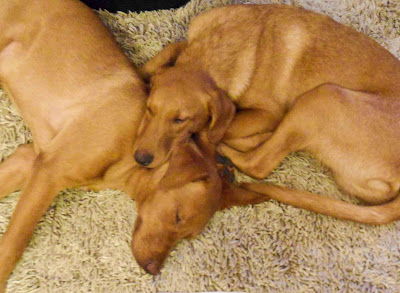 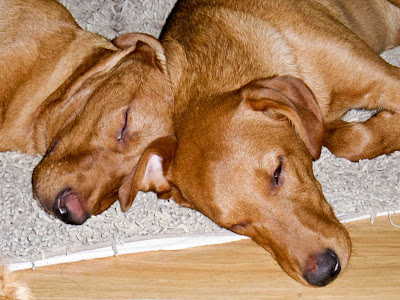 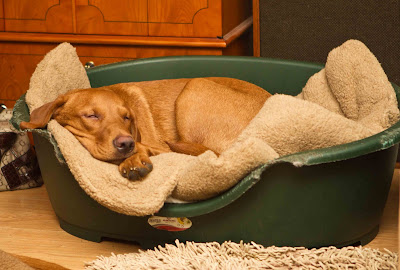 Sometimes the boys were too tired to share a bed. Bertie slumbers.

Bertie and Buster played themselves to exhaustion.

On Christmas Eve some of us went to Midnight Mass - a beautiful introduction to Christmas Day when Gareth and his family arrived. The day passed in a blur of people, food, wine and gifts. Boxing Day was a repeat performance with slight changes in personnel. On Tuesday, everyone departed to their own homes and life suddenly seemed very quiet once more. We all enjoyed our time together and though there will undoubtedly be gatherings during the coming year, none of them will be quite like Christmas, and none of them will bring similar dramatic changes in Bertie’s little life.
Oh, and quite a lot of the items we have been storing have gone home with their respective ownersJ J

At some point we will erect Bertie’s pen again so that we can leave him safely but he’s quite a responsible young lad now and the need is not so pressing. New Year’s Eve will pass quietly – just the two of us, four dogs and Winston Ocicat. 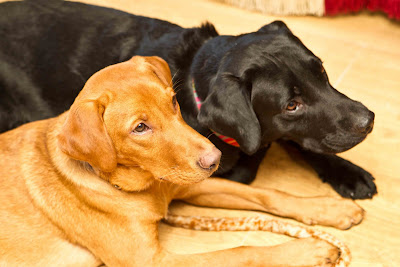 Happy New Year to you all and may 2012 be Healthy, Fulfilling, Peaceful and Prosperous. 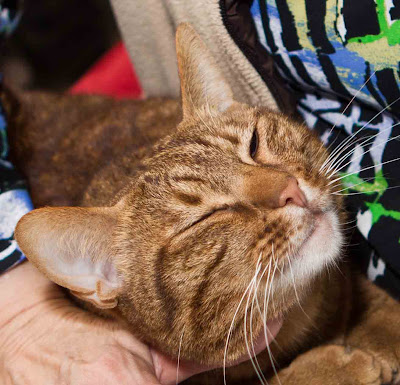