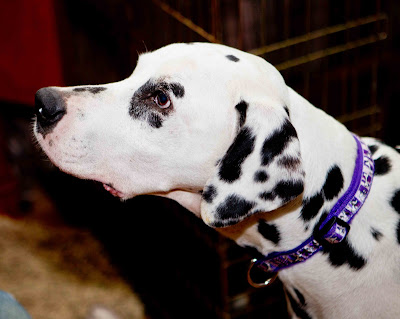 Frodo implores
Just over six months ago Frodo had a gastric torsion and underwent an operation to untwist his stomach. As a precaution, Phil-the-Vet put a stitch in to prevent it twisting should he have bloat again.

A few days before Christma Frodo turned his nose up at his supper. He’s a naturally greedy dog but the anti-epileptic drugs he has to take twice a day make him ravenous. Rapaciousness is a well-documented side effect of the medication, together with ataxia, which is variable.

I looked at him and ran my hands over his sides. He looked a little full but nothing too much. Then I felt the underside of his tummy and that seemed somewhat distended. He wanted to go out in the garden so I took a torch and went with him but he didn’t do anything, just mooched around a little then came back in. I was concerned that he hadn’t peed and although he didn’t appear to be in great discomfort he had retched a couple of times, which filled the air with an interesting odour. 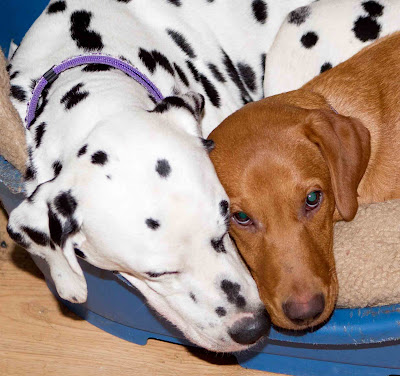 Frodo with Bertie
With our experience of dogs with bloat – three, all Dalmatians – we decided that he should be checked over. I wanted to take him but Barry insisted I stay at home and look after the other dogs.

He and Frodo were gone for ages and my imagination was running riot by the time they came home. There was an accumulation of gas in his stomach from undigested fermenting food so Phil and Nadia had introduced a tube into his mouth and down to his stomach to relieve the pressure – that is, release the gas!! Barry enjoyed that bit;-) After that, he was given an injection – Frodo, not Barry – to relax his intestinal tract so that any remaining gas could be expelled.

We expected to spend a malodorous few hours but actually, it wasn’t bad at all. Frodo slept soundly all evening and I decided I’d sleep downstairs for the night with him but he went upstairs and so did I. He then proceeded to sleep deeply all night, not moving from his bed. Normally, he ambles about, rather like Goldilocks trying out different (dog) beds. If the bed he wishes to commandeer is occupied he looms over the occupant, not making a sound, until the bed is vacated, often with a snarl. The protest is purely for effect – Frodo is the senior dog and all the others know it.

On the other hand, I slept badly, one ear open for sounds of discomfort. I was concerned that Frodo had not had his full quota of drugs though it takes more than a missed dose to cause him to seize. He is fortunate in that respect. Some dogs are so sensitive that the doses must be administered at the same time every day. For them delays can trigger seizures.  One owner I know gets up at 5:00 a.m. to give her dog his pills. His second dose is at 5:00 p.m.

Frodo went back to see Nadia-the-Vet the following morning and was pronounced fit and well. She remarked on how different he is when Barry takes him. With me he’s on guard the whole time, watching and grumbling quietly to protect me. With Barry he’s relaxed and completely unconcerned. It’s the same when we go out walking. He rarely strays from my side but if Barry takes the dogs out without me, Frodo strides ahead confidently, barely giving Barry a second glance - unless he has a pocketful of biscuits. 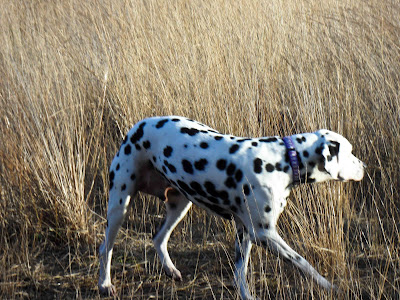 Back to normal . . .
Anyway, the boy had a special diet for a few days and we introduced his normal fare gradually, mixed with the blander food, as his digestive tract recovered.


I call him ‘the boy’ but he has just had his tenth birthday so he is really getting to be quite an old dog. He doesn’t know that, thoughJ
Posted by jabblog at Thursday, December 29, 2011