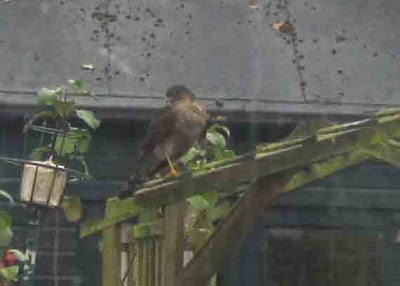 I was reading Joshua’s post at ‘Vive le Nerd’ wherein he commented on the Rough-legged Hawk he had seen in his garden. It reminded me that I had seen a Sparrowhawk (Accipiter nisus) just before Christmas.

From the corner of my eye I saw a bird fly into the holly tree and watched to see if I could identify it when it emerged. I was excited to see it was a Sparrowhawk. Pleasingly it flew to the top of the nearest arch and posed obligingly for me. I had to photograph it through the (grubby) patio door and managed to get five shots before it took flight. 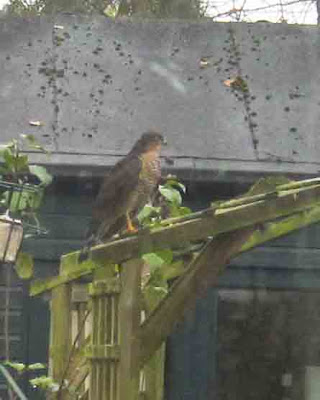 I rarely see Sparrowhawks. I hear them more often or find the pitiful evidence of their depredations in the garden. It’s not their fault that their diet consists almost exclusively of birds.

Mainly they eat small birds – 120 different species have been recorded. The smaller males catch birds from titmice up to birds the size of thrushes but the much larger females will prey on birds as large as wood pigeons and magpies. Some have been known to catch bats. 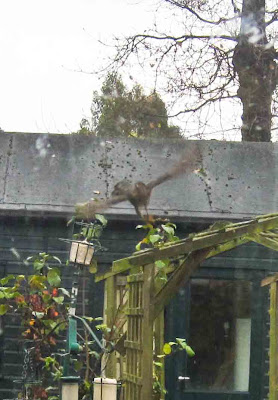 This time the Sparrowhawk went hungry. I’m almost sure it was a male.
Posted by jabblog at Friday, December 30, 2011