In our garden we grow colourful scented flowers to attract bees and birds and butterflies. Naturally, these blooms also invite attention from less welcome visitors – aphids, slugs, an occasional young rat. The lilies play unwitting host to Lily beetles (Lilioceris lilii), bright red shiny beetles which at first glance might be mistaken for ladybirds. Closer inspection shows them to be longer and spotless. Unlike the ladybirds that help to control the aphid population, red lily beetles are most unwelcome guests. They are not a native species and first appeared in the UK at the end of the 19th century but were not known to have become established until 1939, when a colony was found in Surrey. From concentrated beginnings in the Home Counties they have spread gradually throughout most of the English counties and are now also found in Scotland and Northern Ireland.

They may be found on several plants but their life cycle is only ever completed on lilies and fritillaries. Beautiful as they are, they are a pest and as such provide the fish in our pond with unexpected snacks. 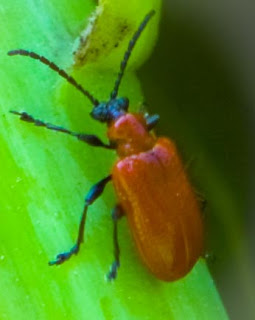 A very attractive-looking beetle in his scarlet coat but RED means DANGER! 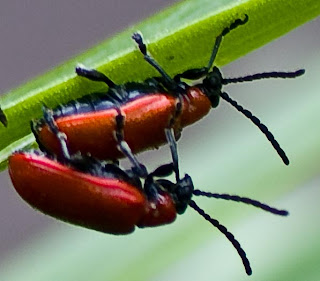 Just doing what comes naturally - and with potentially devastating consequences for lilies and fritillaries . . . 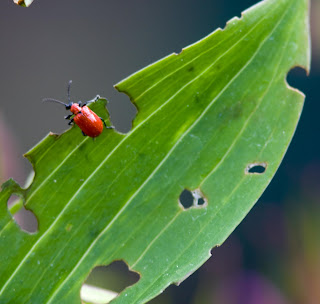 One small beetle (and her friends and relations) can cause an awful lot of damage!
Posted by jabblog at Monday, May 25, 2009