It's the time of year when the bird feeders are louder than usual with squabbling Starlings. Swooping squadrons of smart Starlings stream down on scimitar wings and cluster round the fat cakes, shrieking, whistling, chattering, jockeying for position. The newest members of the clan, though capable of feeding themselves, shrilly demand that the adults feed them and the adults oblige. Some of the adults, beautifully attired in iridescent green and purple, gather great gobbets of fat to carry away to offspring perched elsewhere among the trees.

It is rare to see a single Starling and should one individual alight on a feeder and start pecking busily at the food it is soon joined by legions of friends and relatives. Generally they arrive and leave as one screeching unit.

The inexperienced youngsters’ spatial awareness is not fully developed and so collisions with windows are not uncommon. Sometimes, sadly, the young bird breaks its neck and the bright eyes soon fade. At other times it may be dazed or incapacitated for a period ranging from a few minutes to several hours. Last year one juvenile spent several hours on our patio, moving away carefully when we or our dogs drew too close. We put seed within its reach and by evening we were pleased to see it fly away. The next day a young bird flew onto the patio and spent some time there – we thought it was the same one and mused that it had come to thank us for looking after it the previous day.

The following photographs illustrate (some) Starling antics in Spring. 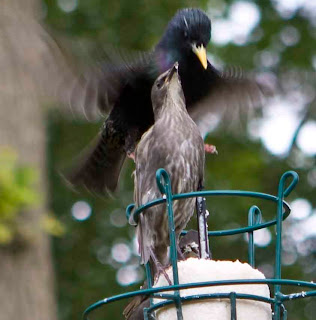 An adult flies in to feed a youngster. 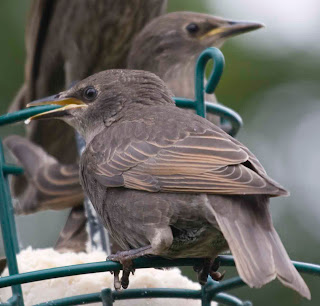 Learning to keep a watchful eye while feeding. 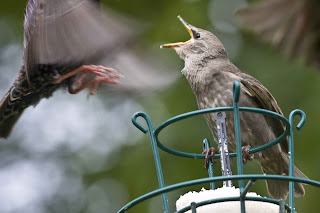 Feed me! Feed me! 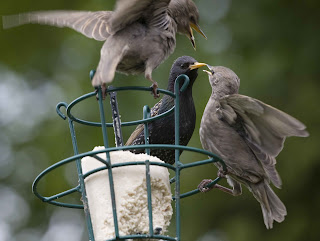 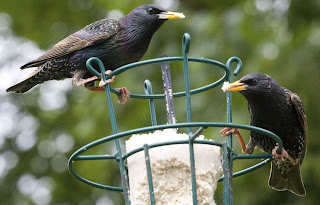 A respite for two adults to feed themselves. The male (on the left) has a blue-based bill. The female's bill is pink-based. 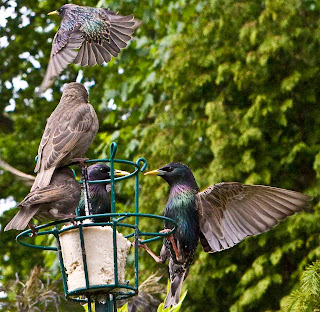 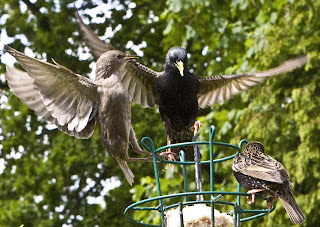 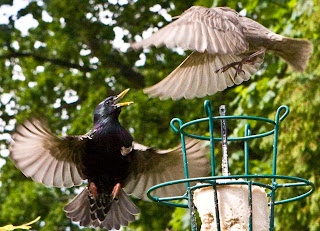 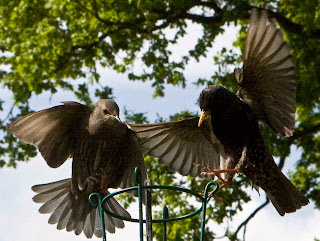 Other birds and beasts visit the feeding stations - a subject for another day!
Posted by jabblog at Thursday, May 21, 2009