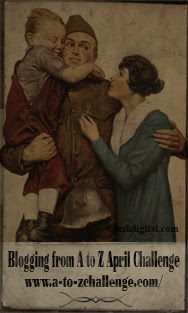 Letter E brings us to Edward, the youngest of Alice’s three brothers. This is the fifth of 26 short stories – 250 words or fewer - about Alice’s life and times.

E is for Edward

Edward had been the baby of the family but was ousted when Alice was born. It was a shock to realise the family dynamic had changed and he resented his baby sister for shaking him from his comfortable complacency. However, his sunny disposition ensured that he soon stopped sulking.

As Alice’s personality developed Edward began to enjoy her company. He was the most audacious of her brothers and urged her to attempt things she would not have dared otherwise. She was a willing disciple, trotting after him from an early age and copying what he did. She became adept with a bow and arrow and held her own in conker contests.


She went scrumping when she was six and learnt to jump down from the apple trees and scramble through the hedge to safety. Edward got into trouble for that. ‘Encouraging your sister to steal is not acceptable,’ his father scolded and Edward hung his head in shame.


Alice didn’t like him being rebuked and cried but Edward looked sideways at her and winked. He gave her confidence and above all he was fun. Spending time with him stimulated Alice, sometimes so much that she became over-excited. ‘There’ll be tears before bedtime,’ her mother would say, shaking her head at Edward and leading Alice away to quieter pursuits.

Edward would just grin and blow Alice a kiss. On the next fine Saturday they would go out again. Daniel and Ruth joined them sometimes but those occasions were necessarily more restrained.