April A-Z blogging challenge 2012 B is for Brothers

This is the second of 26 short stories about a fictional character called Alice. 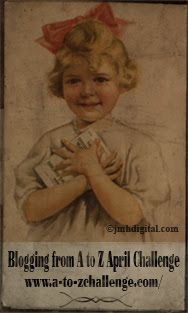 B is for Brothers

When Alice was born in her parents’ bedroom in 1932, Edward was nine years old. Daniel and Charles were eleven and fourteen respectively.

At first they were not very interested in her, a squalling, red-faced unprepossessing bundle of fury and could not understand their mother and her female friends cooing over her and declaring how beautiful she was. They were even more surprised to see their father rocking her in his arms and singing softly to her.

Once she began to look ‘more human’, as Edward put it, the boys took a greater interest in her and began to celebrate her developmental milestones. By the time she took her first tottering steps all three brothers were entranced by their little sister who repaid their attentiveness with flirtatious smiles.

They took pride in teaching her to ride her bicycle, to swim and fish. They taught her to climb trees and tie knots, to build camp fires and construct Meccano models. Alice enjoyed all these pursuits and adored her brothers as much as they doted on her. Happy and secure, no little girl could have lived a more enviable existence until war was declared in 1939 and everyone’s world changed.
Posted by jabblog at Monday, April 02, 2012