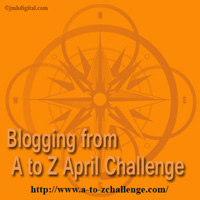 Continuing 26 short stories – 250 words or fewer - about Alice’s life and times, we arrive at J.
J is forJohn

John’s job in the police force often involved danger and he had seen more of the dark side of human nature than he felt anyone should have to experience.  His overriding instinct was to protect his family.

When war was declared he felt a dull ache in the pit of his stomach that remained with him throughout its duration. He knew his sons would be called up eventually but when all three enlisted within a few months he knew a mixture of pride and fear.

He watched as worry consumed his wife and extinguished joy. He felt the loss of their sons as keenly as she but held no false hopes for Edward, grieving for him as he did for Charles. Though he would never have confessed it, in his heart he thought it would have been kinder for everyone if Daniel had died too - his torment continued and increased. His bitterness drained the life and energy from Ruth. She maintained a facade of optimism but John glimpsed the despair in her eyes when she thought no-one was looking.

Alice was the only one who had escaped relatively unscathed. She mourned the loss of her brothers and did her best to encourage Daniel, yet was able to move on and anticipate the future. John was delighted when she introduced Norman. It was refreshing to share the company of an optimistic young man who had survived the horrors of war and felt no need to dwell on them.
Posted by jabblog at Wednesday, April 11, 2012