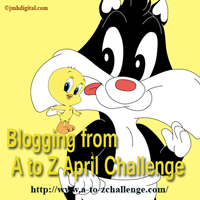 Q brings the next of 26 short stories - 250 words or fewer - about the life and times of a fictional character called Alice
.
Q is for Quirk

All children are unique. So Alice reminded herself daily as Rebecca raced round the garden in her fairy costume. Was it normal for her to insist on wearing the same clothes every day when she came home from school? She was six years old and the fairy dress had been a present for her third birthday. She could hardly squeeze into it now. The zip was broken, the sequins were hanging off the ragged net skirt and the original pretty pink was now faded and greyish.

Rebecca insisted on wearing it to parties. She was a strapping child, not a dainty waif, and the addition of bilious green frog-faced wellington boots did nothing to improve her image. While other little girls sat prettily and played nicely with each other Rebecca was playing football with the boys or trying to climb trees. She was two years younger than Edward John and copied everything he did. When she wasn’t following him she was a dog, answering only to the name Rover, speaking in woofs and growls and eating her meals under the table.
Ivy told Alice it was just a phase that Rebecca would grow out of.

‘No, you were such a good little girl,’ said Ivy, ‘Not that Rebecca isn’t a lovely little girl, too,’ she added hastily. ‘She’s just imaginative.’

Alice sighed and wished her daughter would imagine herself into a quiet, presentable young lady. However would she cope when the baby was born?