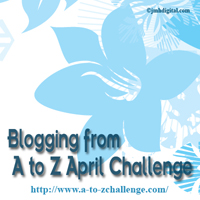 K is the next letter in this series of 26 short stories – 250 words or fewer - about Alice’s life and times.
K is for Kith and Kin

It was John and Ivy’s 40th wedding anniversary in May, 1956. The war had been over for eleven years and rationing had finally ended two years earlier. There was a sense of excitement and optimism in the air and Ruth and Alice decided they should organise a party.

It was the first celebration the family had planned since before the war and they wanted to make it an occasion to remember. They invited John’s sister and Ivy’s brothers and their families. Daniel was reluctant to attend but Alice persuaded him it would be fun to see their cousins again. He remarked sourly that they had all survived the war intact.

With their friends there were fifty guests in all. It was fortunate the evening was warm and they could spill into the garden. Everyone was enjoying themselves; even Daniel was chatting animatedly when a tipsy aunt prodded Ruth and whispered, ‘When are you going to give Ivy some grandchildren? Mustn’t leave it too late, you know. We’ve already got five.’
Ruth went white, mumbled an excuse and ran upstairs. Alice found her sobbing in the bathroom.

‘I’ll never have babies. We don’t . . . Daniel can’t . . . our marriage isn’t like other people’s.’ Alice rubbed her back. She had suspected something of the sort.

John and Ivy thanked them for arranging a wonderful party. Ruth smiled, ‘I’m glad you liked it.’

Alice never felt greater love and pity for her sister-in-law than she did at that moment.