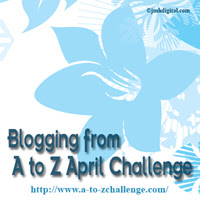 April A-Z blogging challenge 2012
This year I am writing 26 short stories – 250 words or fewer - about the life and times of a fictional character called Alice.
A is for Alice
It was traditional on her birthday for Alice to take down her photograph album and look through it with her grandchildren. As she waited for their arrival on her 85th birthday she picked it up and turned the pages with care, tracing the faces of the people within.
Here was one of her parents looking sternly into the camera, two of her brothers standing unsmiling at their sides. As they all grew older there were smiles and laughter and more relaxed poses were captured as photography emerged from its infancy and embraced modern times and cameras became cheaper and more readily affordable.
The next photo she stopped at showed all three boys with their parents. Edward was grinning straight at the camera. It would be some years before he relinquished his position as the youngest in the family.
She studied a photograph of herself at six years old, sitting between her parents, smiling up at her father. Her brothers, tall, handsome boys, stood behind her parents.
She sighed. The world had changed so quickly after that photograph was taken. She was the only one left to remember and recount the family history, and the photographs acted as markers for her memories. Some recollections needed no prompting; they were etched with tears or laughter. Though time had softened the hard edges of pain or joy the memories remained sharp and unwavering.
A ring at the doorbell announced the arrival of her family and Alice went to greet them.
Posted by jabblog at Sunday, April 01, 2012