Last night I had the strangest dream

Altogether now, sing – ‘Last night I had the strangest dream I’d ever dreamed before.’ Having established that firmly in your brains so that you will be humming it for the rest of the day I will continue. 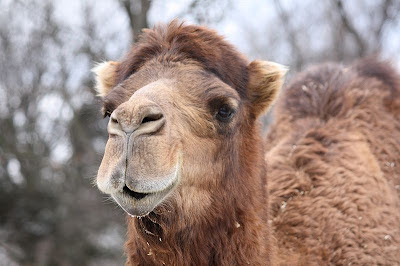 I often have very vivid dreams but usually forget them soon after waking. Last night’s dream puzzled and amused me. I dreamt I had been given a camel. It’s not clear whether I was simply looking after it for a while or whether it was to be a permanent member of the household.

Regardless, it was in my house which had suddenly developed a fifteen-foot high door into the conservatory. At this point my camel was sharing characteristics with a giraffe, at least in my mind. My husband and son-in-law were not in the least surprised to see me riding towards them on this beast which had now acquired a wonderful woven harness of red and gold cord.

After a while I realised the camel was probably hungry but had no idea what it could eat. I found some slightly mouldy corn cobs in the fridge which it munched with enthusiasm and then looked pleadingly for more food. I gave it some bananas and then a few potatoes. After that it seemed rather restless and said in a deep voice, ‘Mooloo.’ (If you want an approximation of the voice think of Brad Garrett as Robert Barone in ‘Everybody Loves Raymond’) Although I don’t speak camel I asked, ‘Do you want to go to the loo?’ and the camel replied that it did.

I led it out into the garden, warning it to be careful where it stepped and wondering what sort of dung it would produce and in what quantity. I thought it would probably be good for the compost. My next-door neighbour was in his garden and I told him, ‘I’ve got a camel now.’ He wasn’t interested, barely looked, and carried on with what he was doing.

By this point I was rather tired and went to bed. I left the camel downstairs but it followed me and lay down at the side of my bed. It was just lifting its front leg prior to climbing on the bed when I woke up.

It was a dromedary, by the way
Posted by jabblog at Sunday, February 19, 2012