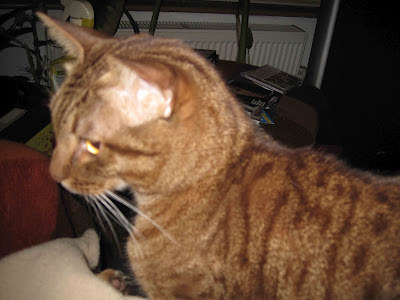 Mrs H told me I hadn’t blogged for AGES – what would I know, I’m a cat! I know night and day (you are the one, only you ‘neath the moon or under the sun) Can you hear that – she’s singing!

Anyway, as I was saying before I was so rudely interrupted, I know night and day and breakfast and supper – oh, and watching birds - and that’s all so I don’t know what AGES is. It might be something nice for all I know and maybe it’s a reward for blogging – there must be something in it for a tiger cat like me. 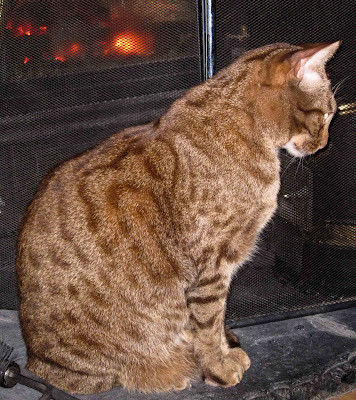 Well, last time I told you all about the buppies. Do you know what, they’ve grown ever so big – well, bigger than me and that’s quite big. Mrs H is still banging on about me losing wait. I don’t want to lose wait, don’tcha know, ‘cos I’m very good at waiting and what would I do if I didn’t wait?

Now, I’ve told  you before, I’m a pashent sort of a chap and I can put up with buppies but only ONE AT A TIME and when Buster comes to stay he and Bertie make my life a livingell, jumping on me and chasing me round the house. It’s enough to drive me to drink, don’tcha know. I don’t really know what that means, ackcherly, but I’ve heard the humans say it. It don’t make much sense to me, ‘cos I don’t need to be driven to drink, I can walk to it and it’s only water anyway, so I don’t know what all the fuss is about. I think it means that it’s all too much to put up with, so why don’t they just say that? I don’t know, humans make life sound very complicated sometimes. I think it’s ‘cos they’ve got so many words. Us cats can say all we need with just miaous and purrs and the humans know what we mean. I s’pose we’ve trained them well.

We had some excitement here don’tcha know. You know I like bird-watching. Well, there was a big bird chasing little birds and that was good, then just now there was lots of birds in the holly tree and they kept coming back and pinching the berries. I thought that was naughty but the humans were really pleased and took thousands of photos.

I poked my nose out of the door and Mrs H said I wouldn’t like it out there ‘cos it’s really cold. Then Mr H decided to light the fire in the conversatory and it filled the room with smoke so he opened the windows to let the smoke out then he couldn’t find me and he was worried so he and Mrs H searched and searched. I knew they was looking for me and I didn’t quite hide but I didn’t come when they called and when they was getting really worried I sauntered into the sitting room and said ‘What’s the problem?’ don’tcha know and they was ever so relieved.

I know it was a bit naughty of me but my stars, do they think I want  to go out in the cold dark? Intruder cat does that. She waits by the pool room and makes all friendly with little miaous, but I’ve seen her stalking Bertie down the garden path so I don’t think she’s as sweet as she makes out. I wouldn’t want any harm to come to Bertie – if anyone’s claws are going to be used they’ll be mine but I won’t ‘cos he’s just a buppy still and I can keep him in line perfectly well by batting him with my velvet paws.


It was Mr H’s birthday on Friday and Bethan and Robert come to stay on Saturday. I like it when they come 'cos they really like me, don’tcha know, and it’s always nice to be liked, isn’t it?


The world is covered in white stuff. The dogs seem to like it. Bertie even managed to walk on the pond - Mrs H said he was learning to ice-skate, silly human!

That’s all I’ve got for now. Be good! 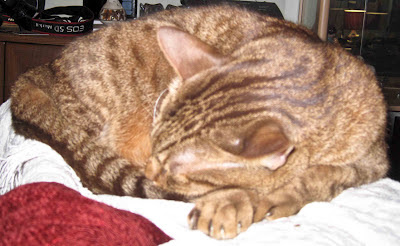