Mag 106 I was Andy's assistant 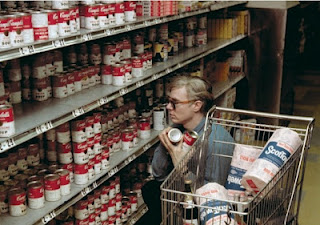 I was Andy’s assistant in the early 1960s when he was in his thirties, just around the time his name became the buzz on everyone’s lips. Yeah, I was his gofer. He was always sending me out on errands – that’s when I wasn’t washing brushes or mixing paint or preparing canvases.  Mostly, though, I ran his errands.

He liked soup, Andy did. His favourite was tomato and he’d eat that while he watched television. One day he asked me – told me – to go out and buy one of each of the different flavours of Campbell’s soups. I said, ‘Gonna try a different soup tonight, Andy?’ but he just told me to get a move on. So I went down to the local convenience store and picked out the soup cans. I’m telling you, thirty-two cans of soup are heavy, man, and not in a good way.

You could have knocked me sideways when I saw what he did with those cans. Who would ever have thought it? We parted company after that. I liked working for him but it was time to move on.

Yeah, it was fun working for Andy, a lot of laughs. I’d have done anything for him – well, almost anything.  I was never one of his pissers, though. I drew the line at that.