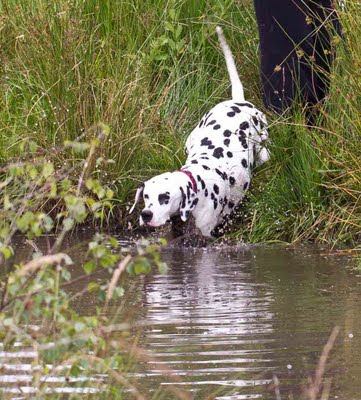 Bathing is one of Frodo's delights
Barry has been away this week, sailing with Gillian and two of her children. His leg is much better – he was bowled over by the very solid Gus when we were in Somerset which resulted in him having two wonky legs rather than just the usual one! Hours spent in A&E when we got home – after he insisted on driving, saying it was just weight-bearing that hurt! – proved that there was no lasting damage, and diclofenac and ibuprofen relieved the pain.
Meanwhile, I have been writing – or trying to – and looking after Gillian’s dogs as well as our own. They all sleep in our room, most of them on our bed, which is fine when Barry’s away as they occupy his half. Winston usually comes and curls up next to me as well, so I am never lonely. Tia and Foxy, Gillian’s dogs, think it is their duty to guard the house and bark at . . . nothing, apparently! Tia also grumbles constantly at Frodo. She is slightly older than him so perhaps she’s asserting her right to be top dog. He takes little notice.
Frodo has had four grand mal seizures this week. I hope that will be the end of the cluster this time round. With luck it will be several weeks before he is afflicted again. I’m accustomed to dealing with him when he’s seizing, talking to him and supporting his head so that it doesn’t bang against furniture or floor. He can’t hear me, of course – he’s unconscious - but perhaps it’s comforting to him in some way, particularly when he regains consciousness but is still disorientated. 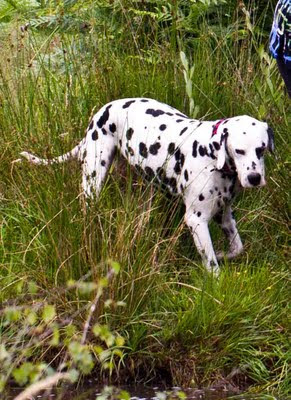 Jenna takes no notice when he has a fit and Tia keeps away. Gus thinks he’s playing and wants to respond but Foxy looks more as though she might attack. She’s a very mild-mannered creature but even the quietest of dogs can misinterpret the odd signals given by a seizing animal as aggression and react accordingly. Thus, at 1:00 am on Thursday, I was keeping her away and simultaneously trying to cushion Frodo’s head when my right hand came within his champing jaws. The result was that he bit my thumb and index finger. It was quite painful. 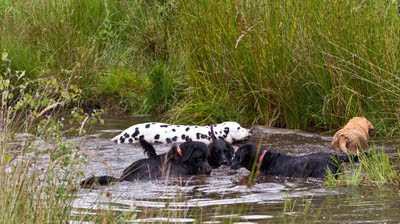 The black Labradors seek the Kong. Frodo and Foxy don't!
Later, on Thursday evening, he had another fit. Foxy was very excited and trying to reach him and as I pushed her away my left arm was bitten. Isn’t fresh blood bright, like a swiftly blooming crimson flower?
So now I have a sore, bruised thumb which is much better than it was, and bruises and a plaster over the puncture wound on my arm which aches a bit but is otherwise fine. Worse things happen at sea! Poor Frodo is the gentlest dog and would be mortified if he knew! It is nearly seven years since he was diagnosed with idiopathic epilepsy and I’ve managed to keep bits of me away from the dangerous bits of him for all that time – until this week!
Ah me! Next week, the bites will come from tiny sharp puppy’s teeth.J
Posted by jabblog at Saturday, August 20, 2011