A Plumber’s Tales #4 The country cottage (1) 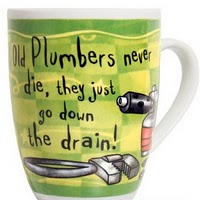 Paul was asked to work on a run-down country cottage. According to him it was practically derelict – a real money pit. Fortunately, for him at least, the owners seemed to have limitless amounts of cash to spend on their holiday retreat.
Among other problems the kitchen in this property was below the main bedroom and had a very uneven ceiling. It sloped so that is was a foot lower at one end of the room than the other. Paul suspected that the bedroom floor was also sloping and his suspicions were confirmed when he went upstairs. He worked hard to rectify the problem and was pleased when he finally achieved an even, straight floor in the bedroom complemented by a plumb level ceiling in the kitchen.
The wife, however, was less than satisfied. She was happy to have a horizontal floor in the bedroom but wanted the ‘authentic olde worlde’ look of the uneven kitchen ceiling, so Paul had to undo his careful work, much against his will.
When the husband arrived at the cottage for the weekend he was astonished to see the ceiling and Paul had to explain what had happened. The husband was quite accustomed to his wife countermanding his directions so everyone was quite happy in the end – at least, the wife was. Paul and the husband were quietly dismayed!
Posted by jabblog at Saturday, August 13, 2011