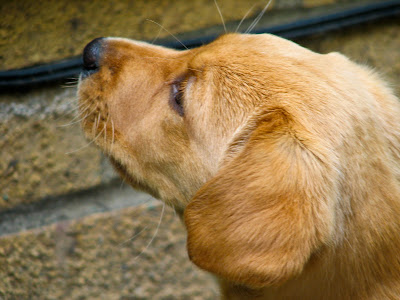 Foxy in July 2005
In 2005 Gillian and Paul bought a fox red working Labrador puppy. Their old rescue dog, Jake, a fantastic, gentle boy, had died and their black Labrador Tia missed him. She would leave the house, something she had never done before, and go off apparently looking for him.

Foxy was due to be picked up just before they went on holiday. When Gillian and the children and I arrived in Powys the puppies were playing in an enclosure on the grass and they were adorable. They were all fox red, perfect little miniature dogs, identical to the untrained eye though Charlotte and Ali, having handled and played with them from birth, knew them as individuals. Foxy had proved quite a leader, digging a tunnel from the pen and leading her siblings on a journey of discovery. They didn't get far before the escape was discovered and they were safely enclosed once more.

Our dogs greeted her with interest and enthusiasm and she was not in the least fazed by their size and coats – she'd never seen spotted dogs before! The next day Gillian and the children returned to Dorset to pack and then came back to Berkshire to deposit Tia and Foxy for the duration of their holiday. 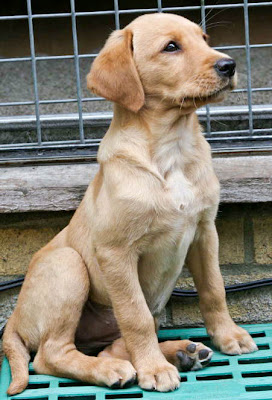 Foxy was a delight. We hadn't had a baby puppy since Buddy and had forgotten the sheer joy of watching such a young animal explore and play and respond. As the time neared for Gillian and Paul's return we knew we were really going to miss this little character. After a long discussion but in reality within a very short time we decided to ask Charlotte if she would allow us a puppy. She agreed and in due course Jenna was born.

When we collected Jenna she came with us without a whimper or a backward glance – faithless bitch! Indeed, she responds to all comers, human, dog, cat with enthusiasm and friendship. She is a hard-working, eager little dog, ever willing to please unless she is following a scent and then her nose is busier than her ears – she is much better than she used to be though. We keep her occupied and try to avoid times when deer are more likely to be around. Until Jenna taught us otherwise we had never realised there were pheasant in the forest but she puts them up all over the place even though she's not supposed to be a Springer!

As a small puppy she was curious, responsive and not easily spooked and it was obvious that she had been well socialised. When she met adult dogs she was impeccably behaved, submitting to their inspection and doing everything a good puppy should to show that she knew her place at the bottom of the pecking order. With our dogs she had great fun, particularly with Frodo who could get her head in his mouth and who really enjoyed rough and tumble with her. It is delightful to see adult dogs playing so carefully with young pups. 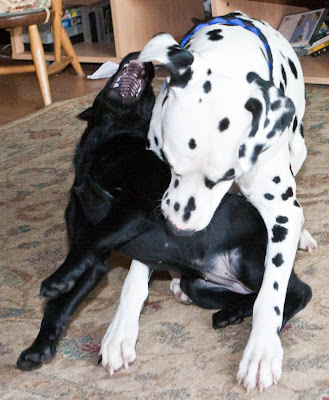 Jenna is now almost four years old and a confident, wonderful companion. There is not an ounce of nastiness in her though she would stand her ground if required. Surrounded by three boisterous unruly collies last week we thought she might tell them what she thought but fortunately they bounded away on some other pursuit.
She is an avid television watcher and barks at animals on the screen. She also purports to be a guard dog, making loud 'go away' noises only to meet incomers with great joy. She shows her true working credentials when Tia and Foxy come to stay. She and Tia work together, tails waving like flags, the one waiting for the other when the 'bag' has been picked up. (Foxy is more interested in retrieving biscuits!) The tails are a great indicator of progress. As they quarter the ground and near the objective the wagging gets faster. When the 'bag' has been spotted and is about to be taken the tails wag very fast, the shoulders lift and the front paws hit the ground in a pouncing movement. Even alone Jenna works tirelessly and energetically and we have to be careful that we don't exhaust her. The most stimulating exercises for her are those where she has to sit and watch and wait before being sent out to fetch. If the 'catch' is in water she ducks her head under the surface in her quest to find it. It is fascinating to watch her.
Jenna is deferential and gentle with Dominie and will take her a toy if she senses that Dominie is frustrated or unhappy. Along with Frodo she carefully cleans her mouth stopping the instant Dominie tells her to. She is respectful to Buddy and seems to understand that he cannot see very well but licks his muzzle when he is relaxed. 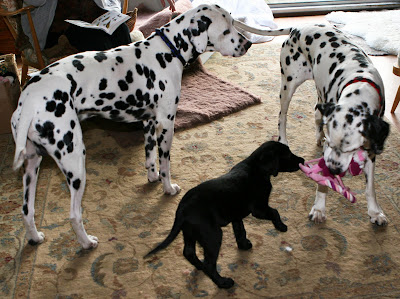 Jenna and Dominie play, watched by Frodo, January 2006
She thinks she is a lap dog and clambers up but cannot settle, fidgeting this way and that until she has found a comfortable position which inevitably is most uncomfortable for the human she has favoured. Like most Labradors she is very interested in food and would always appreciate at least twice the amount she is given. It would be very easy to give in to the pleading expression in her pretty eyes. 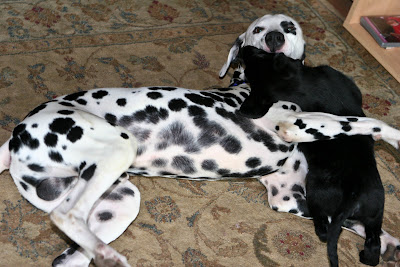 Frodo and Jenna play-fighting, 2006
Every dog we have known intimately has been so very special and unique and Jenna is no exception. We have never reached the point where we cease to be amused and amazed, taught and humbled by these wonderful animals.
Posted by jabblog at Tuesday, October 20, 2009