The humans cleared everything out of the conservatory and that was okay coz it gave me and Monty lots of room to charge around and practise our gymnastics – well, it's more modern dance really with lots of leaping and twisting and vertical take-offs. We sang quite a lot too coz it was echoey and our voices sounded really loud and musical.

It was fun helping Mr and Mrs Human moving all the furniture, specially the two really big heavy speakers. Mr H said some funny words when he knocked into something and it fell over. He was ever so cross! You can't move in the dining room though coz that's where they put it all. They took the drawers out of the desk to make it lighter to lift so natch me and Monty had to explore. Mrs H took a picture of me in it – if she'd been a bit quicker she'd have got both of us in. 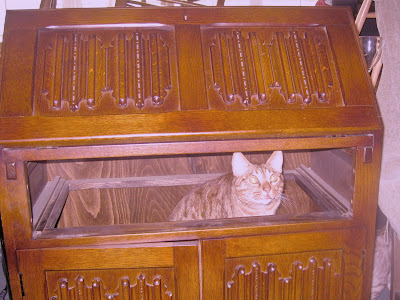 Still, she does her best I s'pose.

Then two men came and they pinched the conservatory roof. Honest! They took everything and then they put up another roof only it didn't have no glass in it. I mean – what were they thinking? There was lots of banging and sawing. Me and Monty don't like a lot of noise – we're quiet fellahs don'tcha know. Worse than that - we was shut out of the conservatory. Well, the humans thought we might get out - we've told them we're not like the Burmese cats they used to have. We don't climb – well, not much anyway. We had to stay in the rest of the house with the dogs. I mean to say, the conservatory belongs to us. We spent our early days in there when we first came to live with Mr and Mrs Human before we met the dogs properly and when Monty was so ill. We have our meals in there and everything and our scratching post. We like to sit on that and watch the birds and look down on the dogs.

The men came back the next day and put some blue glass in the roof. Me and Monty think that's quite cool. We was allowed back in the conservatory then but Mr and Mrs H didn't put none of the furniture back. Then the men came back a few days later to finish off and we were shut out again. Today it rained – and there's a leak round the flue so they're coming back again next week to mend it. Still no furniture. Mr and Mrs H say they're going to do some deckerating and today Mr H filled in some holes with some stuff that grows just like a mushroom. The first lot grew so much some of it fell off. Mr H did some painting over some cracks with some thick stuff and he used a float – I thought they was used for swimming.

What else has been happening? Well, I told you Nina and Gareth had come back from Noo Yawk and they were sad to leave Man at'em. They're moving back into their house on Tuesday and their stuff's coming from Noo Yawk on Wednesday. Oh and Kiri's hurt her leg and has got crutches and now she's going to school in a wheelchair with her leg stuck straight out in front of her. Elliot was eleven yesterday. We haven't seen him lately because we make him sneeze and he had some important exams to do. We make Gareth and Gillian sneeze too and Mr H. We don't mean to - it just happens.

Mr and Mrs H keep talking about GUS. I don't know what that is but it's coming soon. I'll keep you posted.