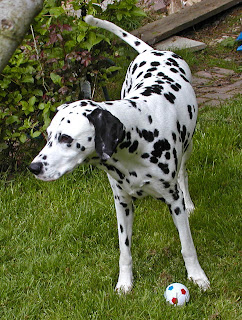 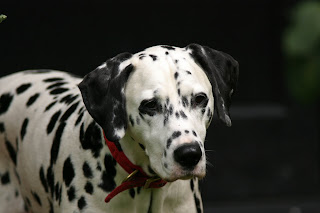 I'm not superstitious but last Friday 13th developed into a bad, sad day.

Our Gentle Dominie took her last trip to the vet. For several months she had been unable to walk unaided but seemed otherwise happy, alert, involved in everything around her. For some time she had rear wheels to assist her hind legs when we went out. When she could no longer control those we put her in a 'DoggyRide' so that she could accompany us to the forest. She would walk for ten or fifteen minutes, helped along with a hand under the back of her harness, then ride for the rest of the time. Back at the car she would walk again for a few minutes, catching up on peemails and poohmails. She greeted visitors vociferously and made her wishes known. When she whined she was telling us she was hungry, thirsty, wanted to turn round, needed to relieve herself or simply wanted to give and receive affection. During the last couple of weeks she cried more frequently and insistently in the daytime needing more lifting and turning. She didn't seem able to get comfortable though she slept more soundly at night.

In the past we have always found the advent of a new puppy – or baby – or kitten – has sparked interest in our elderly companions, both animal and human. We hoped Gus's arrival would help Dominie but although she was mildly interested, licking him and nudging him, she really had little energy to cope with his persistent attempts to play. She was unable to escape his attentions but enjoyed having him snuggle next to her when he was tired and quiet. Dommydom had a strong maternal instinct and was always a kind and understanding mentor to pups but she could no longer teach and this puppy needed to learn.

I have always said to pet people that one knows when the time comes to say goodbye. Perhaps that is true but human nature is largely optimistic and, though it's a cliché, where there's life there's hope. We saw the warning signs but chose to interpret them for our comfort. We asked our lovely vet Nadia for impartial advice, knowing in our hearts what she would say and what we had agonised over for weeks. It fell to Barry to take the Dom to the vet. Our menagerie is well-known there and the nurses are kind and caring.

When Barry came home he needed to be alone so I took the three adult dogs for a long walk in the forest. It was raining hard and the wind was blowing but it cleared my mind and dried my tears and I reached home drenched but more relaxed than I have been for a very long time. It was a strange evening and we felt Dom's absence keenly. The rest of the pack was quiet but watchful. Jenna was particularly questioning and depressed – she would often take Dom a toy or lick her nose. Frodo would also wash her and that had always seemed to please her. Monty Ocicat, who had spent a lot of time cuddling up to Dominie latterly, was prowling and restless. Gus, the puppy, took over Dominie's cushion in the kitchen where she would keep me company each evening as I prepared supper. He sleeps on it now in the same attitude as she did, with his head hanging over the edge, nose pointing to the floor.

The thing we noticed most was the silence. We had become so accustomed to her calling to us ever more frequently and now there were no requests. We realised clearly for the first time how much attention she had demanded and we acknowledged the relief we felt now that she was at peace. We had kept her too long and her ever-louder and more determined calls recently had been telling us it was time for us to let her go. She wasn't in pain, simply tired and worn out. Dominie was a big dog with a robust constitution and my keen desire that she would die peacefully in her sleep was never going to be realised; all the years of running with Barry and walking with me, of swimming in the ponds and lakes and playing with pups and young dogs had kept her physically fit, mentally alert and made her heart strong. We often watched her as she slept, running effortlessly in her dreams, but her waking hours were frustrating.

We all come from stardust and to stardust we will return. Dominie has her place in the cosmos now. Rest in peace, gentle girl, dream sweetly and be free to run again once more. You gave us all so much love and trust, our gentlest girl, so many memories for all our family.

'The one best place to bury a good dog is in the heart of her master.' Anon

Thank you to Denise Nesbitt for initiating and hosting this meme.