Yesterday upon the stair . . . 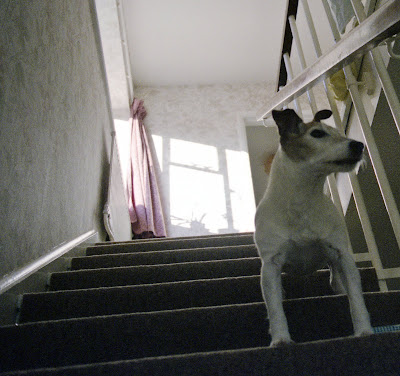 This is Biddy, senior Jack Russell, taken about 20 years ago.

Yesterday, upon the stair,

I met a man who wasn't there

He wasn't there again today

I had only ever known this verse and didn't realise there was more to the poem. It goes on:-

When I came home last night at three

The man was waiting there for me

But when I looked around the hall

I couldn't see him there at all!

Go away, go away, don't you come back any more!

Last night I saw upon the stair

A little man who wasn't there

He wasn't there again today

The poem was called 'Antigonish' and was inspired by a haunted house in Antigonish, Nova Scotia, which boasted the ghost of a man wandering on the stairs.

It was composed by Hughes Mearns and formed part of a play called 'The Psyco-Ed' which he had written in 1899 at Harvard. It was performed in 1910 by an amateur company.

In 1939 'Antagonish' was adapted and set to music. It was recorded by the Glenn Miller Orchestra and was a popular song on the hit parade.

The verse has been adapted over the years to accommodate different events and personalities. For example, a 2008 version allegedly written by a Labour minister in the Brown government runs:-

In Downing Street upon the stair

I met a man who wasn't Blair.

Oh how I wish he'd go away.

William Hughes Mearns (1875 - 1965) was a graduate of Harvard and the University of Pennsylvania. He was a poet and an educator.He espoused a view unusual at the time, that children should be encouraged to express themselves in what is now known as 'creative writing'. His philosophy is encapsulated in the following quotation: