We are going up in the world. We have Royalty coming to stay. I never imagined that would ever happen. Not only is he honouring us with his presence, he is bringing his brother with him. We have much to prepare. We know we will be very busy, particularly at the beginning.

‘Is he British Royalty?’ I hear you ask. ‘The name seems unfamiliar. Is he a scion of one of the lesser branches of the Windsor dynasty?’
No, he isn’t. I don’t think you’d know his family. His father’s known as Charlie and his mother’s name is Keira. They make a very handsome couple and he and his brother have inherited their good looks. He has five other brothers and two sisters, all very similar in appearance. Yes, it is a large family - quite unusual for these days.
What’s that? You’d like to see a photograph of him. Yes, I have a couple of photos and even a video that you might enjoy.
Here you are. 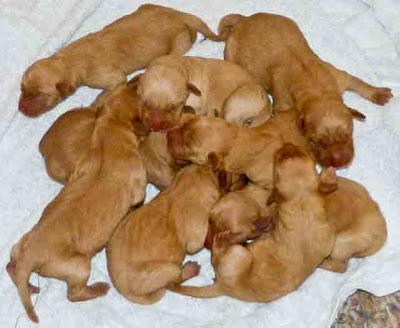 Here he is with his brothers and sisters - can't really tell which one he is! 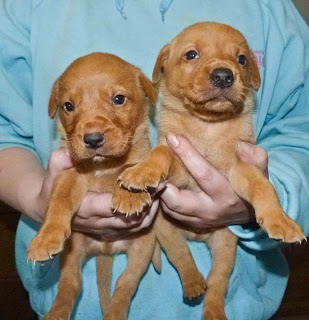 Prince Rupert, aka Bertie, and Buster - not sure which is which! Buster will be joining Tia and Foxy in Dorset. He and Bertie are Foxy's nephews.
Posted by jabblog at Tuesday, August 09, 2011