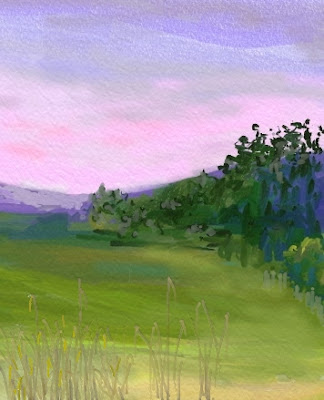 Image by Jinksy
Jane stepped into the dewy field and felt her soul expand as she gazed at the sunrise. House martins skimmed above the long grass, catching the early insects busy about their business. Canada geese honked in the distance. Far off a dog barked and was answered by another. The morning was fresh and new-washed with a hint of warmth to come. It was going to be a perfect day in this peaceful Somerset hamlet.
Jane stretched and breathed deeply of the sweet air. She set off across the meadow, following a faint track towards the hills.
Two hours later the sun had gained strength and Jane was glad of her wide-brimmed hat and bottles of chilled water. She crested the highest hill and marvelled at the vista spread at her feet. She settled in the lee of a rocky outcrop to eat her lunch. Below her a red kite described slow, graceful circles, a flick of its tail changing the direction of flight.
A movement to her left caught her eye and she glanced across, expecting to see a buzzard stooping on unfortunate prey but saw instead a tall figure leading a procession of softly chanting people in flowing robes. They drew to a halt and formed a circle into which stepped two figures, brightly apparelled, faces painted in vivid patterns.
Jane watched for a while before realising she was witnessing a Wiccan ceremony. She remembered the date – June 21st, the Summer Solstice. She suddenly understood that the two figures in the middle of the circle were representations of the Horned God and the Mother Goddess. Fearing that she was intruding and might be discovered she slipped away.
Later, as the sun set, she saw a faint glow from the far hills – a bonfire, maybe, a final obeisance to Litha? 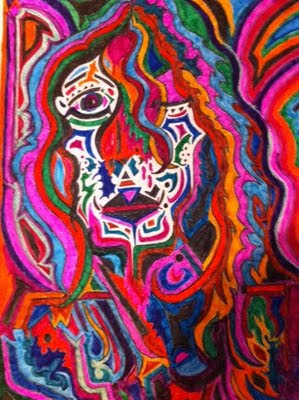 Image by Natasha
Jinksy's brainchild, 'In Tandem' can be found here
Posted by jabblog at Thursday, September 01, 2011