The Endless Saga of the Endless Pool – parallelogram and Quercus

The building that was to become the Pool Room had been ordered before the foundation was laid and the shuttering for the concrete had been measured and placed accordingly. Barry had planned meticulously as is his wont.

Once the base had dried out it was time to check the measurements again to make sure it was all as planned. To Barry's consternation it was not the rectangle he had designed and confidently expected but a parallelogram. It looked rectangular but had no right angles. Much muttering ensued as he repeatedly measured and calculated, exercising his brain and my worry glands. Not for the first time I wondered whether we had been wise to undertake this project. Finally he declared himself satisfied that all would be well, there was no problem and everything would fit and I began to breathe normally again.

Then he turned his attention to the two oaks, one behind the base and one to the right. W 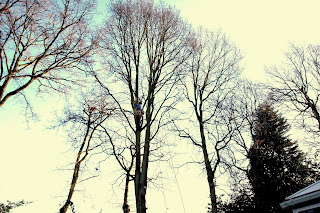 e had discussed them many times. Their canopies obscured much of the sky and the ground beneath them was shaded and didn't support much plant life. However, like all oaks, they sustained a plethora of life in their branches and provided walkways for generations of squirrels. We didn't want to lose them but felt they needed trimming of their weaker limbs. A tree surgeon was consulted and his advice was sobering. Thinning or cutting out the crowns would result in a fresh spurt of growth; eventually the roots, easily matching the area of the panoply, would force up the thick concrete base and ultimately the Endless Pool.

Reluctantly we decided that they must be cut down and the date was set for Twelfth Night. The Christmas decorations and the oaks would all come down on the same day. 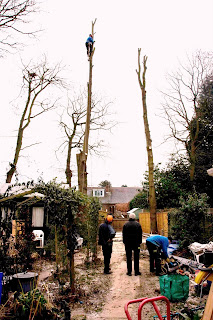 hredded. We had requested that the trunks be left for us to store and season for our log burners and the men obligingly sliced them into more manageable chunks. Our next-door neighbour and our neighbour at the back both decided to take advantage of workmen on the spot and each had one tree cut down. This pleased Barry as it released more star-watching sky.

The pool foundation was now hidden beneath a mound of logs which we shifted over the next few days. We used a log-splitter – a sort of hydraulic ram – to split the larger, tougher logs. I was enjoying using it and felt I was making a valuable contribution to the whole exercise but my involvement came to an abrupt halt when one particularly resilient log flew apart, several parts of it hitting several parts of me. I retired injured, blood streaming from a cut below my eyebrow and Barry went straight out and bought me a bright yellow Bob the Builder hard hat and some sturdier, more comfortable goggles.

'It'll be great when it's finished,' we enthused, each privately wondering if that day would ever come. Now, six months into the project we are within hailing distance of the completion.