Sumer is icumen in

I could shut my eyes and still know that summer is well on its way. On this sunny April Sunday my ears are under assault from an army of lawnmowers;

. . . but oh! the peace, the calm, the lovely silence when the mowers cease and the ear drums stop ringing and the birds can once more make themselves heard.

'Sumer Is Icumen In' is a traditional English folk canon and a six-part polyphonic song which was composed around 1260, at a time when 'modern' music was commonly in two or three-part polyphony.

The manuscript containing performance instructions was found in Reading Abbey though it may not have been written there. It is now housed at the British Library. The language is Middle English (Wessex dialect). 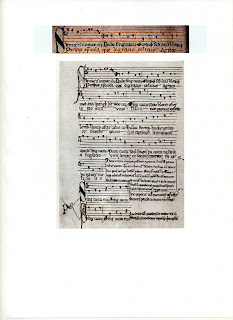