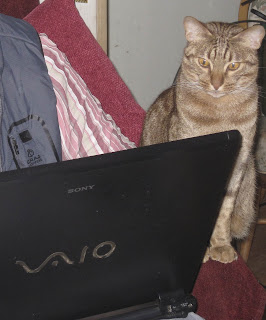 Just thought I'd let you all know how we're getting on. We got over our loss of appetite and are back to normal now. One of the things we like doing is catching flies. It's fun and it exercises all sorts of things –claw extension and retraction, paw-eye coordination, hunting skills like stalking and tracking and the muscles we use for leaping.
This is a photo of me, Winston, blogging. I have to get my human to type but the words are all mine.
Did you know we're an accidental sort of breed? All coz of humans messing around changing colours don'tcha know. I'm going to get my human to write the next bit coz there's words there I don't understand.


Mrs Virginia Daly of Dalai Cattery in Michigan bred Siamese cats and wanted to try and breed an 'Aby (Abyssinian) pointed' cat; in the second Siamese-Abyssinian mating a golden spotted kitten appeared. Her daughter thought he looked like an Ocelot and said 'Why don't we call him an Ocicat?' He was called Tonga and was never used for breeding but his brother, a tawny coloured cat from a later litter started the breeding programme. Then American Shorthair blood was introduced to give substance and bring in the silver colour gene. More than twenty years passed before the Ocicat was given official recognition in the USA in 1986. Ocicats can still be outcrossed to Abyssinians, thus widening the gene pool. It is possible for litters to contain spotted kittens, classic tabby-patterned kittens and 'mountain lions' – solid-coloured kittens looking like Abyssinians. There are twelve colours available.
Ocicats are strong, lithe, athletic cats with wonderful temperaments.
Winston here again . . . p'rrrrr, p'rrrrr . . . Blimey, she do go on a bit, don't she? It's enough to make a cat laugh! 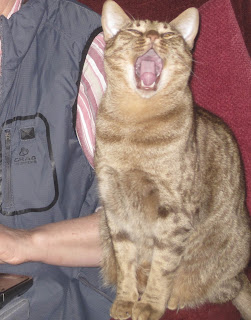 She is right, though, we are gorgeous. Think I told you before – I'm chocolate and Monty is chocolate silver and we are very handsome, so we're told. I was the only chocolate in my litter. I had two tawny sisters, a lilac silver sister and a cinnamon brother. 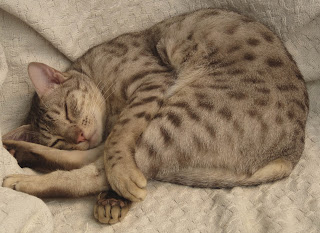 PS: You know, Monty slept all the time I was blogging! He was soaking up the sun in the conservatory while I was exercising the old brain cells, don'tcha know. 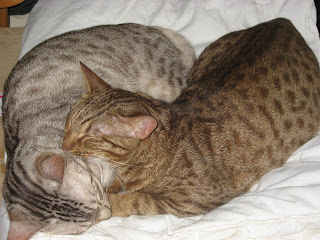 This is me and Monty sleeping together. Monty's very pretty and all, but just look at my rich chocolate!