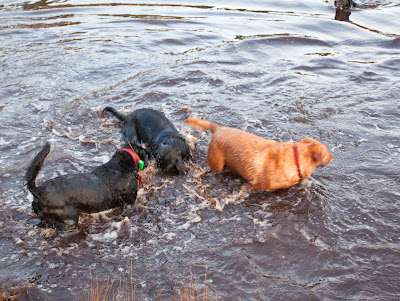 The dogs entered into the Hallowe'en spirit by playing their own version of bobbing for apples - in this case, bobbing for the Kong, which has a habit of eluding their champing jaws. Foxy's telling Tia to hurry up and join in the fun.
It was raining when we set out for our walk this afternoon. It matters little whether the sun is blazing or the heavens are weeping as I always finish up rather damp around the edges. This is because I am the Kong flinger and Barry is the photographer and the Kong is flung into every pond we pass to be retrieved by exuberant Labradors who then return to me and shake vigorously to rid themselves of the prodigious volumes of water they have each acquired. In order for Barry to achieve the best possible two thousand or so photographs that he takes every day (I exaggerate – it’s only around two or three hundred) I am ordered instructed asked to hurl the Kong many, many times with the result that I am fairly well showered in a short space of time. 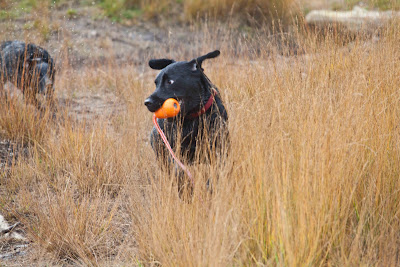 Come on, keep up! 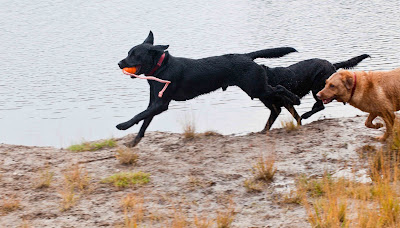 And round we go again!

Quick! Run behind Janice . . .
The bits of me the dogs don’t manage to soak  byshaking are dealt with as Gus plays ‘I’ve got the Kong – catch me if you can’ and they all hurtle behind me, brushing against my legs as they go. I say ‘brushing’ – it’s  more like slapping, rather like running the gauntlet, only in this instance the victim (me) stands still and the gauntlet runs past. It is only a matter of time before I am knocked off my feet one of these days and into the chilly water. It’s all good clean fun! Actually, it’s rather muddy but ‘It’s all good dirty fun’ gives quite the wrong impression.
Frodo enters the water for a sedate swim and then sidles up and leans against me, thus ensuring that he has done his bit in the ‘Let’s get Janice wet’ game. All of this is recorded for posterity, at least until I edit the photographs.
The journey home with five tired dogs is much quieter than the outward leg and we persuade ourselves that the rest of the day will pass quietly, but no, the dogs soon start to campaign for supper. As we go through the front door they are waiting expectantly at the patio door at the rear of the house – this is our attempt to minimise the muddy paw prints. It doesn’t work, of course, and the Turtle mat inside the door just isn’t up to the job of absorbing moisture from twenty eager feet. I smile rather sadly when I see the advertisements for Turtle mats and the glowing recommendations from satisfied customers, all of whom seem to have large dogs and pristine floors. How do they manage that? I put down two mats, end to end, and still the evidence of dogs passing through is clear for all to see. Most of the time it’s only Barry and me to see it, but I’m sure you get the general idea.
Once back inside, any remaining doggy sogginess is meticulously deposited on the furniture. I don’t spend my entire life doing laundry but sometimes it feels like it as I load the washing machine with yet another doggily-decorated throw or mat.
I make tea and toast but thoughts of relaxation are banished as the dogs canvass for scraps, which they’re not allowed but get anyway from Barry. They know, however, that they have not had their just deserts and employ different strategies to attain them. It doesn’t matter how many times I tell them that they must wait because it’s not good for them to eat immediately after exercise – they take no notice and after all, perhaps they’re right. Wild dogs and wolves chase their prey, sometimes for extended periods. Having captured their meal they don’t then lie down for half an hour to rest before eating.
Winston is letting me know that he hasn’t liked being left alone and that he too is hungry. He sits on the arm of my chair, gently batting Frodo’s nose with a soft paw. Frodo is the lead singer in the ensemble and sets up a monotonous three-note tune of G#, D# and E (above middle C on the piano) which is repeated endlessly as he edges closer and closer to me. Winston occasionally says ‘Waahh’ in a glissando an octave higher. Jenna sits on the footstool and looks at me beseechingly. Foxy sits at my feet and stares unblinkingly at me with her beautiful, soft brown eyes and Tia and Gus are close by, watchful but silent. I am surrounded!
Any slight movement from me which might indicate that supper is imminent causes a canine (and feline) tsunami. Eventually, of course, I get out the bowls and provisions and feed the starving multitude. Winston, sniffing carefully before attempting to eat, dines daintily and decorously. A cat’s digestion is less forgiving than a dog’s and mistakes can be fatal. On the other hand, the dogs tear into their meals without a second glance and everything’s gone in a trice. Frodo likes to shake his food thoroughly, to make sure it’s dead, I suppose, thus embellishing walls and cupboards with an attractive patina of meat – well, blood, really. I mop it up and give thanks for my hardworking washing machine.
Finally, peace is restored and the animals sleep. Now, what shall we have for supper?


I'm linking to That's My World Tuesday. Click here to see other people's worlds
Posted by jabblog at Sunday, October 31, 2010