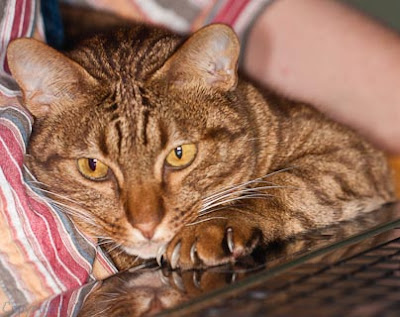 Winston here . . . p’rrrrr, p’rrrrr . . .
I haven’t blogged since July but we was quite busy in the house, don’tcha know. Tia and Foxy come for the holidays and that was nice for Jenna ‘cos it meant Gus stopped mobbing her and jumped all over Foxy instead! Foxy don’t mind – she’s ever so soft.
I wasn’t feeling very chipper the other day. It’s all Mrs H’s fault – she changed my food. Now, I like the raw meat she gives us – chicken wings and beef heart and ox kidney and chicken fillets -  and I like my special food what comes in silvery pouches and has fish in it, but she give me a different sort of food what come in a little dish. Three of the dishes was okay but the last one give me a terrible tummy ache and put me off any food for a day. She won’t make that mistake again!


Buddy wasn’t feeling very well either, but Mrs H give him eggs scrambled in water and cooked his chicken for him and give him rice. He was soon all right again and wanting his usual food. He went out walking with the other dogs and come back all fresh and happy.
Two of the younger Humans come home the other day with their friends. All the dogs had to be shut away ‘cos the friends don’t like dogs. Jenna was allowed downstairs later ‘cos she’s quiet but I could go wherever I wanted and everybody liked me. I got lots of attention and lots of stroking and I purred so loudly. It was great! At last the other dogs come down and went out in the garden. Everyone was ever so tired when Bethan and Susannah and their friends went away again. It’s nice having extra people in the house.
There were more bodies in the house when Gillian and the children come last weekend. They always make a big fuss of all of us and I get titbits which Mrs H says is bad for me. I don’t know why – they taste good to me. Gus played with Foxy. He sat on her head but she didn’t mind. Buddy got lots of cuddles. Marnie and Gillian even bathed him in the humans’ bath and dried him off with towels and Mrs H’s hairdryer. He went out a couple of times with Callum and Kiri and Marnie and was a very cheerful boy. It felt quiet when Gillian and the children went home to Dorset but we’d all had a good time.
It all changed on Monday night ‘cos Buddy suddenly died and everyone was very sad. He wasn’t ill or nothing and he hadn’t hurt himself. The Humans said he’d been through a lot and I remember he was very ill when me and Monty was still kittens. It feels queer without him but I ‘spect we’ll all get used to it. Dominie died last November and then Monty went in April. We don’t understand what happens but Mr and Mrs H said something about stardust and that sounds rather nice to me. I’d like to twinkle in the night sky but I hope I don’t have to start soon.
That’s all I’ve got for today. Be good!
TTFN
Posted by jabblog at Friday, October 01, 2010